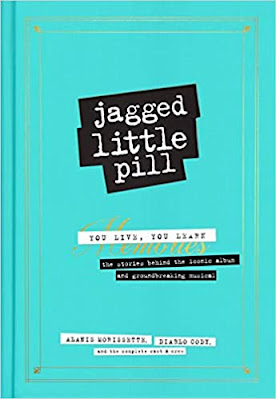 Broadway shows of the 80's (mostly the British mega musicals) published coffee table books that amounted to extensions of a souvenir program. But in the 90's, this somewhat limited genre really upped its game, with the publication of the books that supported such shows as The Who's Tommy and Rent. These keepsake editions included essays by creatives and cast members, behind-the-scenes articles, and complete librettos. In recent years, shows fortunate enough to have achieved a certain level of success have continued that tradition and have really expanded on it. Recent "next level" tomes include those for Natasha, Pierre and the Great Comet of 1812, Come From Away, and the musical phenom, Hamilton.
This brings us to this month's Broadway Book Club selection, Jagged Little Pill: You Live, You Learn: the Stories Behind the Iconic Album and Groundbreaking Musical. One hell of a title title for one hell of a book.
Title: Jagged Little Pill: You Live, You Learn: the Stories Behind the Iconic Album and Groundbreaking Musical
Written by: Alanis Morissette, Diablo Cody and the Complete Cast and Crew of Jagged Little Pill; Principal Photography: Matthew Murphy
Forword by: Rachel Syme; Introduction by: Alanis Morissette; Afterword by: Diablo Cody
Publisher: Grand Central Publishing; 224 pages; hardcover; full color
Since I got this book for Christmas, I've been through it about five times, and I still haven't gotten everything out of it. Each time through, I find something more to focus on. This book is loaded. And there is something for everyone here - fans of the show, fans of Alanis, rock musical fans. And, dare I say it, even (maybe especially) people who don't like jukebox musicals! The information here is such that it more than justifies using this seminal album as a basis for a fully developed book musical.
The book starts as the show does, with the annual Healy Family Christmas Letter, printed on holiday paper. What follows is a mini scrapbook of the family, including pictures of each member growing up and all those things a perfect family does, including one in front the castle at Disneyland! There are also photos of Healy ephemera - like Mary Jane's pills and Frankie's adoption certificate. Similar photos throughout the book offer detail and context for the plot and themes of the show. What is interesting about all of this is that every time I look at the photos I see something more than I did before.
The full libretto is included, as with most of these types of books, but what sets this one apart are the annotations by Morissette, who explains each and every lyric change and why it was made. Each major song also gets a full essay, with thematic analysis, notes on how it was on the album and how it was worked into the show. Cody and relevant cast members also weigh in on the song in question. Also supplementing the libretto are detailed interviews with key creatives and cast members. I found the relationship each cast member has with the album, as well as insight into how they developed characters, particularly interesting. There are also some insightful tidbits about how the show changed throughout the journey to Broadway.
Other things that bring this book to the highest level are the hundreds of color production photos, dozens of backstage photos, and full dossiers for each character. Essays about the issues in the show delve into topics like LGBTQ identity, opiod addiction, sexual assault and transracial adoption. There is even a Guide to Social Activism pamphlet included.
This wonderful book is an amazing companion piece to the show, and makes me even more excited to see it again. But until we can all do that again, I'll open it for a sixth time and discover even more.
Grade: A+
📸: J. Kyler
#2470
Posted by JK at 7:59 PM