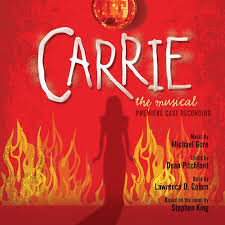 Like so many musical theater fans, I was thrilled and excited to see the revised version of Carrie: The Musical back in 2012. For decades, I read everything I could get my hands on about the ill-fated Broadway production of the 80's. And I listened to my share of leaked songs. But, even with all of that, plus staring at the few production photos that are out there, I just knew I had to see it as a full production for myself. I finally did, and I loved it - flaws and all - and marveled at the talent - the stunning performances of the great Marin Mazzie and relative new comer Molly Ranson, backed by a youthful company of unknowns. Of course, now names like Carmen Cusack, Wayne Alan Wilcox, Christy Altommare, Derek Klena, Andy Mientus and Jeanna De Waal are known and beloved by theater fans. I'm a bit disappointed that (so far) it didn't go farther, but with a pedigree like this one, the cast recording is worthy of continued regular play.
Track By Track:
Carrie: The Musical  Off-Broadway Cast Recording
Track 1: In ****
Puberty and teen angst prove to be a lethal combination in this show, and this opening number gets right to the root of it. The explosive outbursts and building tension not only sets the mood, but also reveals the ultimate irony - they all have the same fears and insecurities. They are all just different versions of Carrie White.
Track 2: Carrie *****
What a roller coaster ride of sadness, anger, self-realization, and dare I say it? Hope. "The sound of distant thunder, the color of flame...someday everyone will know my name." Great title number and performance by Ranson. 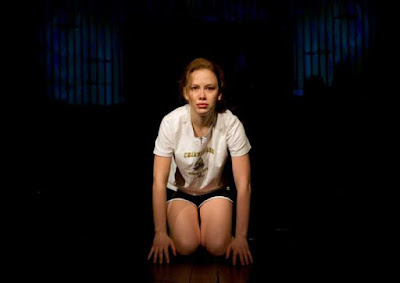 Track 3: Open Your Heart ***
"Let Jesus in." This is the closest we will ever see to a genuine mother - daughter love.
Track 4: And Eve Was Weak *****
This song, where Margaret turns the Bible's words against her own daughter is frightening - not only in the context of the show, but in context of today's evangelical Christians. It is also our first glimpse of the power of the late, great Marin Mazzie. They are truly a match made in Hell. And it is glorious.
Track 5: The World According to Chris ****
The pop sound and deceptively simple platitudes are perfect for this diatribe on teen self-centered existence. "Better to burn than get burned." This number also serves to move the plot when an unlikely friend emerges in defense of Carrie. De Waal and Ben Thompson are perfectly evil, soaking up the "everyone else is doing it" vibe. But the last lines are the most revealing about our villainess. 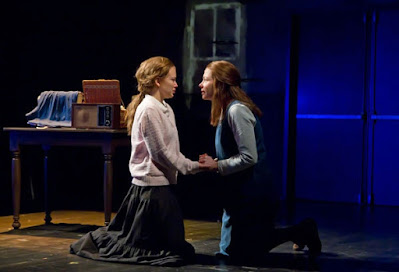 Track 6: Evening Prayers ****
A haunting duet between mother praying openly and reverently, and daughter locked in a closet praying to make sense of what is happening to her. The moment she first discovers her "gift" is a subtle one for Carrie, who still wants nothing more from her mother than love and acceptance. Another gorgeous duet. One wishes for a fuller orchestration here.
Track 7: Dreamer in Disguise ***
Jocks can have a heart and be poetic, even if they use clumsy metaphors. Here Derek Klena sings the heck out of a song that nails the awkwardness of young men and their emotions.
Track 8: Once You See ***
Another tender moment of teenage self-actualization and growth. We realize that Carrie's greatest allies are the kids who became adults. Christy Altomare is lovely here.
Track 9: Unsuspecting Hearts *****
This ballad could have been a top 40 pop hit for sure. Easy on the ears, and a welcome moment of clarity and understanding. When I saw this, I knew Carmen Cusack was going to be a star.
Track 10: Do Me a Favor *****
This dialogue-as-song moves the plot, sure, but it is so catchy you are forced to listen. The juxtaposition between competing Carrie White goals almost gives you hope that poor Carrie will have a happy ending. Almost. The real star here is the vocal arrangement.
Track 11: I Remember How Those Boys Could Dance *****
The act ends with a powerful aria for Margaret, with a duet with Carrie as a preamble. Mazzie's performance here is miraculous in its ability to make us understand why this mother is the way she is. We almost pity her, yet we are thrilled by the unleashing of Carrie's powers: the daughter effectively imprisons her mother the way she has been imprisoned. 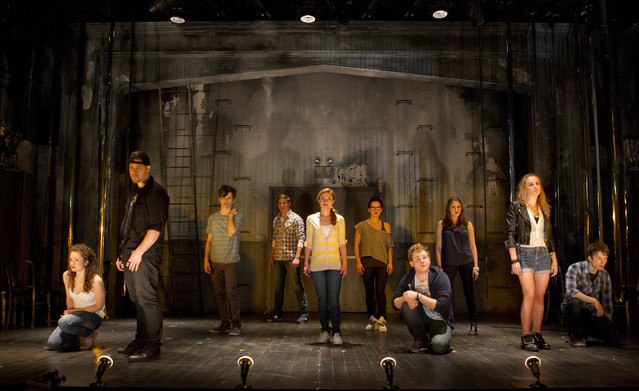 Track 12: A Night We'll Never Forget ****
With ominous chords, act two beings in much the same way act one began, with the teens expressing their common fears and unrealistic hopes - this time the Senior Prom. Again, the vocal arrangements are exceptional. "You ain't seen nothing yet.."
Track 13: You Shine *****
Here's a sweet moment of reconciliation between two kids (who are showing a lot of adult selflessness) who have no idea how little time they have left. Klena and Altomare really do shine here. No wonder Anastasia fans love them so much.
Track 14: Why Not Me? *****
Ah, the prom night angst. It is a universal experience. For Carrie the uncertainty is outweighed by simply having the chance to have a night where she's just like everyone else. Her bravery and optimism is heartbreaking. Molly Ranson's best number.
Track 15: Stay Here Instead ***
Desperation can be cruel. Perceived rejection can be even more cruel. The way Mazzie speaks then sings, "Don't go," is both achingly sad and terrifying.
Track 16: When There's No One *****
Marin Mazzie's last big number sounds so beautiful and sad. And then you realize this mother is planning to kill her own daughter to "save" her. A chilling, stunning delivery. 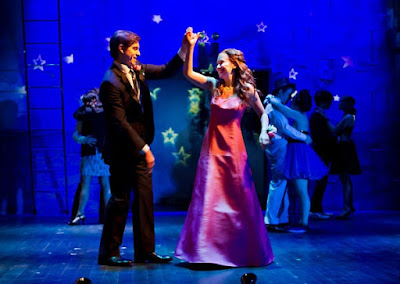 Track 17: Prom Arrival ***
Tracks 17 - 22 may as well be one long number, such is the epic nature of this operatic Greek tragedy sequence.
Track 18: Unsuspecting Hearts (Reprise) *****
We find out that Carrie and Miss Gardner have a lot in common. A lovely reprise that makes the impending finale all the more poignant.
Track 19: Dreamer in Disguise (Reprise) ****
What a difference context makes! Another lovely reprise. Tommy really is Prince Charming. Another reason the finale is crushing.
Track 20: Prom Climax ****
The crude, simple language set against the driving rock guitar is fitting for the rotten kids who carry out their cruel plot against a sweet outsider. I love how "a night we'll never forget" weaves in and out of it.
Track 21: Alma Mater ****
The dialogue and the sound effects here are the star, even as the song is the tune of the act one church song. 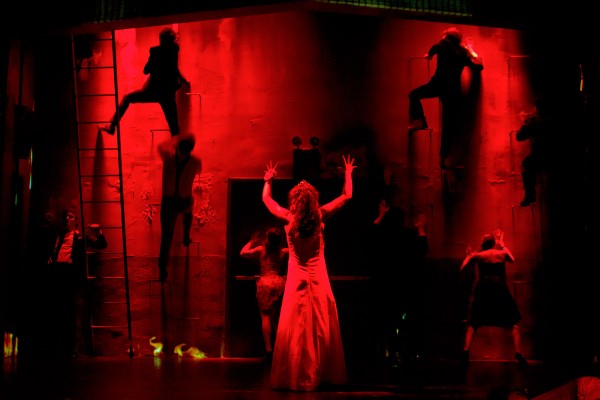 Track 22: The Destruction ****
As I said about the last song, the sound effects here are thrilling, as is the weaving in and out of musical themes and snippets of songs. I remember feeling the theater tremble as this was happening.
Track 23: Carrie (Reprise) *****
See the picture below.  It perfectly captures the sheer terror of this reprise sung as a lullaby. A quiet end for tortured souls. 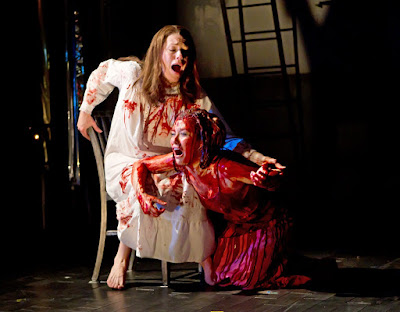