"Hit Songs" From (Off) Broadway Misfires: Heathers: The Musical Had an interesting chat on Twitter the other day, wondering why certain shows flop here, only to find much bigger success over in London. Three titles came to mind instantly: Legally Blonde (poised for yet another UK revival), Amelie and the topic of today's entry, Heathers: The Musical. As I recall, years ago when this project was announced, the off-Broadway production had its sights set on Broadway. But it was not to be - despite a loyal cult following, mixed to bad reviews did it in. Of course, in all three of the above cases, there was a decided feeling of "why should this movie be a musical?" and "how could THAT ever be a musical?" Perhaps this says more about me than anything else, but I say, "why not?" In all three cases, I really loved what they came up with. In the case of Heathers, my issue was mainly the cheesy, cheap look of it, not matching the bigger ideas of the book and score.
Ah, the score... I find it to be solid. Quirky, fun, and mostly character-driven, the story only sang when it needed to, and that's a plus. (I found it pretty superior to the more successful Mean Girls later.) One of my favorite tunes from the score, "Seventeen," is not only a catchy-ish ballad, but encapsulates all that is terrific about this show.
"Hit Songs" from (Off) Broadway Misfires:
"Seventeen" from Heathers: The Musical 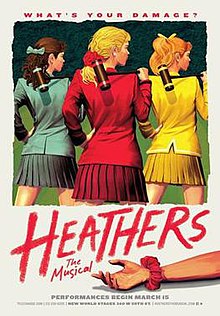 But that does not make us "wise"

We're not "special", we're not "different"

We don't choose who lives or dies

Sneak a beer and watch TV

Don't you want a life with me?

Can't we be seventeen?

That's all I want to do

If you could let me in

I could be good with you 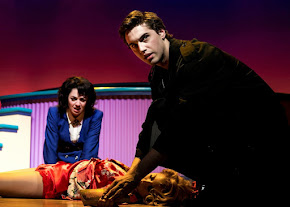 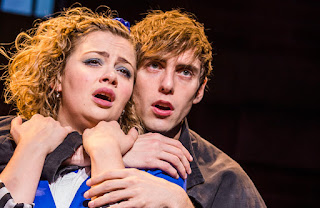 Why This Should Be a "Hit Song":
Besides the beautiful melody, and how well it fits the specific moment in the show, this could (and should) have a life outside the theater. I love how the tone of the music changes from urgent confrontation to dream-like optimism. The lyrics - especially these hard days - are universal. All that teen angst and uncertainty, trying to fit in, to be heard. Given the context of the show, it really makes me think about kids who at best are made to be outsiders, and at worst, end up being school shooters. Where did they lose their ability to be just seventeen? The first several lines also make me think of just about everyone today. Damaged, sure, but how many people realize that that doesn't necessarily make you wise, special or different? And why do you need to be? The key here is the last lines above. "Let me in, I could be good with you." Everyone needs someone.
Posted by JK at 7:00 AM