This week’s entry is about the 1956 Original Broadway Cast Recording of My Fair Lady.

One of the earliest recordings in the boxed set, this true classic of a cast album still holds up as a great representation of one of the most successful musicals in Broadway history. The cast is pretty much unimpeachable, the orchestra lavish, and the sound amazingly good (it’s a testament to its quality that I didn’t even notice it was a mono recording as I listened to it). 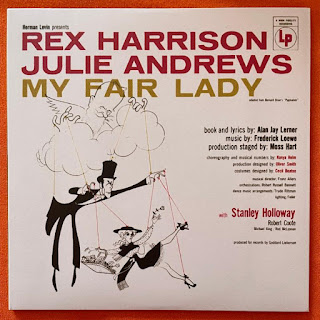 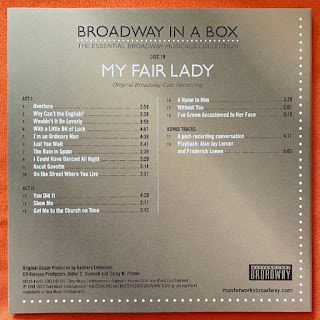 The two leading singers, of course, give definitive performances. Julie Andrews sings the role of Eliza Doolittle with all of the passion and sweetness that would become her trademark, even if she didn’t convey the character’s pre-transformation earthiness quite as vividly as Lauren Ambrose did in the last revival. Rex Harrison is simply flawless as Henry Higgins, which isn’t surprising since the part was basically written to match his skill-set as an outstanding dramatic actor with limited singing abilities.

The supporting roles are equally well-cast. Robert Coote is bright and engaging as Higgins’ frequent scene partner, Colonel Pickering. Although I don’t care for either of Alfred Doolittle’s big songs in the show, Stanley Holloway certainly nails them, capturing the character’s boisterous and heedless nature. Probably the best of all is John Michael King as Freddy Eynsford-Hill, who delivers a beautiful version of my favorite song from the show, “On the Street Where You Live.” 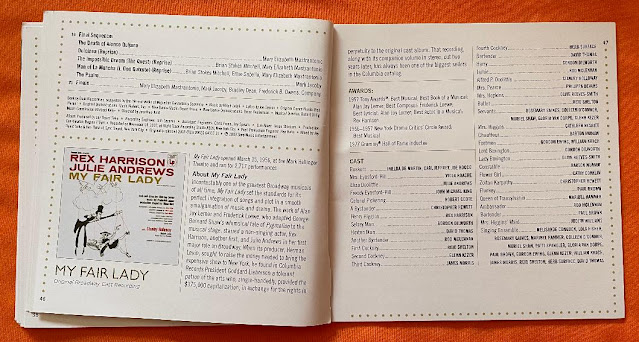 The CD is generously filled out with two five-minute interviews conducted by Columbia Records president and LP pioneer Goddard Lieberson. The first was conducted after the 14-plus-hour recording session for the cast album. Asked by Lieberson which is their favorite song, Harrison answers “I’m Just an Ordinary Man”; Andrews says “Just You Wait”; and lyricist Alan Jay Lerner quips “Oh, What a Beautiful Mornin’.” Andrews interestingly notes that the recording session was the first time she really noticed the show’s intricate orchestrations, which are apparently difficult to hear on stage. (The interview, it must be said, is marred by an unfortunate joke from the host, about which I won’t go into additional detail.)

In the second bonus interview, Lieberson asks Lerner and composer Frederick Loewe about their creative process. They note their early difficulties in finding a title for the show, and especially in casting the role of Higgins; the latter problem was resolved by their decision to write it as a sing-speech role, thus converting a casting quandary into a writing challenge more under their control. Of their general approach to songwriting, Lerner says that he first conceives the title of a song, which Loewe then sets to music before they collaborate on the rest of the song. To illustrate the process, they discuss and then perform together “If Ever I Would Leave You” from their work-in-progress at the time, Camelot.

Next up is the 1979 Broadway Revival Recording of Oklahoma!