Broadway Games: It All Adds Up!

BROADWAY GAMES:
It All Adds Up!
Okay, theater people! Time to put those math skills to the test. This week's game is a 2-part endeavor. First fill in the Broadway numbers below. Then use them to solve the 4 equations.
Good luck! 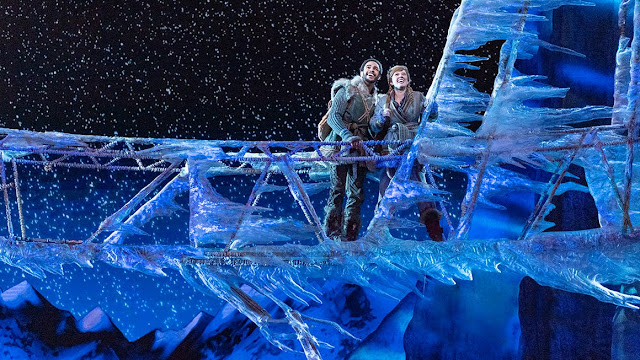 Mame gives young Patrick this advice about living life: "Open a New WINDow"
How Corny Collins describes his dancers in Hairspray: "The NICEst Kids in Town"
When Evan Hansen wiggles his cast at the glass, he's: "Waving Through a WINDow"
Evita's "gambling" song - it's a big risk: "DICE Are Rolling"
Anna's big question for Elsa in Frozen: "Do You Want to Build a SNOWman?"
In She Loves Me, Amalia's sings of her favorite flavor of this frozen treat: "Vanilla ICE Cream"
When West Side Story's Jets visit a social worker and a judge (among others) to appeal to a certain cop: "Gee, OffICEr Krupke"
Eurydice and the Fates sing this almost at the start of Hadestown: "Any Way the WIND Blows"
When Into the Woods' Baker's Wife asks about her evening, Cinderella sings this: "A Very NICE Prince"
In Carousel, Carrie Pipperidge sings this song about her future plans: "When I Marry Mr. SNOW"
Spring Awakening has a purple summer and this azure breeze: "Blue WIND"
The two sides to Grand Hotel's aging ballerina, or how the two make up moguls are described in War Paint: "Fire and ICE"
Posted by JK at 7:00 AM