This week’s entry is about the 1979 Broadway Revival Recording of Oklahoma!

Broadway in a Box CD Review:
Oklahoma! (1979 Broadway Revival Cast)
Considering the pivotal position of Oklahoma! in the history of musical theater, I’m embarrassed to admit that I had little familiarity with it prior to seeing Daniel Fish’s recent Broadway re-imagining of the show. That version, intimate in scale and designed to highlight the show’s darker themes, is a far cry from this very traditional-sounding revival cast recording. This will never be my favorite Rodgers and Hammerstein title, but this recording is a good record of how the show was originally intended to sound; most of its individual elements are expertly realized, even if technical competence is given priority here over personality and “local flavor.” 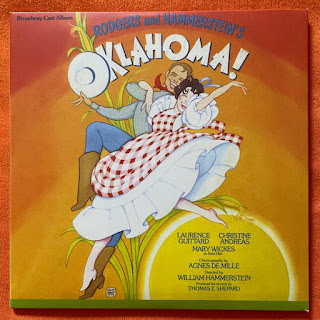 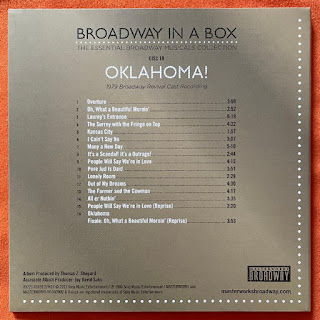 This is especially true of the four performers in the show’s central dramatic roles: Laurence Guittard (Curly), Christine Andreas (Laurey), Martin Vidnovic (Jud), and Mary Wickes (Aunt Eller). All are extremely capable singers in the traditional Broadway style, but they come off as rather generic on this recording. (I doubt the CD would sound all that much different to me if each pair of men and women switched places.) An R&H master like Kelli O’Hara manages to be both technically perfect and highly individual in her interpretations; this quartet manages only the former. That’s still a significant accomplishment given the challenging material, but in this version these characters could just as well be from California! or Illinois!

We do get more variety from the actors performing in the supporting roles. In particular, Harry Groener (Will Parker), even if his singing is a little nasal for my taste, makes a strong impression with his version of “Kansas City.” And Christine Ebersole’s performance as Ado is the highlight of the recording: she really does achieve an effective marriage of beautiful singing and vivid characterization. 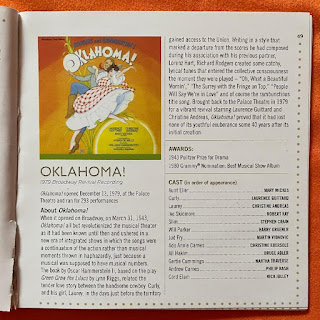 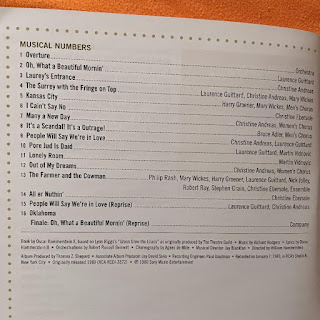 The recording itself is of a very high quality. Even in the choral sections, all lyrics are clear, and the chorus sounds terrific, as does the large orchestra playing Robert Russell Bennett’s original arrangements.

Next up is the Original Broadway Cast Recording of another show ending in an exclamation point: Oliver!