This week’s entry is about the 1966 Music Theater of Lincoln Center Cast Recording of Show Boat.

Easily the oldest musical (though not the oldest recording) in the set, Show Boat is generally recognized as a turning point in the history of Broadway storytelling, years ahead of its time in its integration of story and song. Unfortunately, despite its Lincoln Center polish and cast full of accomplished singers - including a genuine Broadway legend - this recording is much less than the sum of its parts, and it failed to make much of an impression when I listened to it recently. 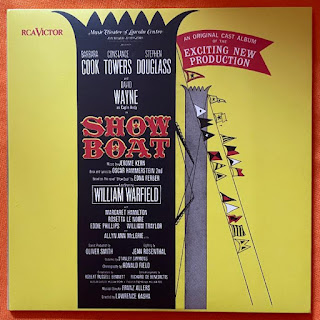 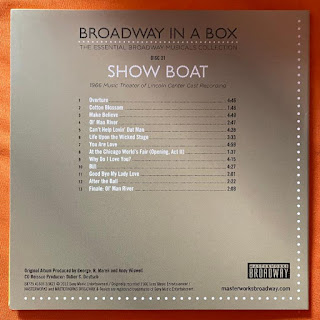 The main problem, sad to say, is the singing. Don’t get me wrong - every voice is impressive in its own right, and wouldn’t sound out of place in a legitimate opera house. However, either due to miscasting, poor musical direction, or some combination of both, most of the main singers - Barbara Cook (Magnolia), Stephen Douglass (Gaylord Ravenal), Constance Towers (Julie), and William Warfield (Joe) - come off as just too generic on this recording. For a musical so closely tied to a particular time and place, there is basically no attempt to establish any specificity in the vocal characterizations.

For a concrete example, I couldn’t help but notice that, even though the famous song is called “Can’t Help Lovin’ Dat Man,” I never heard anything but “that,” with a perfectly enunciated voiced inter-dental fricative. Surely Oscar Hammerstein’s orthography is an implied request to add some local flavor to the articulation of these lyrics, but no attempt whatsoever is made to do this. It’s as if the producer of the recording were determined to stamp out anything approaching authenticity. (One exception is the contribution of Margaret Hamilton, as Parthy Anne Hawkes, whose vivacious musical comedy approach definitely stands out.) 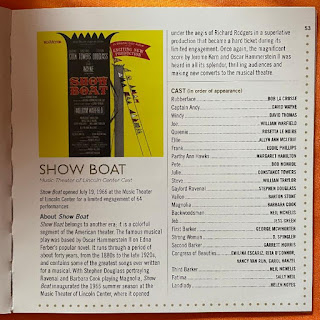 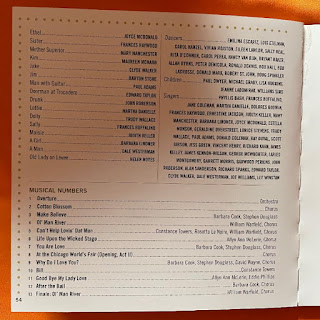 As is the case with other recordings from the Music Theater of Lincoln Center series, technical production values are extremely high. The chorus sounds great, and an enormous orchestra plays Robert Russell Bennett’s original orchestrations. The balance between singers and orchestra is well-executed, and the lyrics are very easy to follow.

Next up is the Original Broadway Cast Recording of The Sound of Music.