This week’s entry is about the 1962 Original Broadway Cast Recording of Oliver!

Oliver! is a bit of an outlier in this set, being the only show written by a non-American (native-born or naturalized), Englishman Lionel Bart. It also happens to be the first musical I participated in when I was in elementary school, as a stage manager for a severely truncated and almost certainly unlicensed performance in a school basement. While the show will never be among my favorites, and the recording itself has a few issues, this was a nice reintroduction to the score. 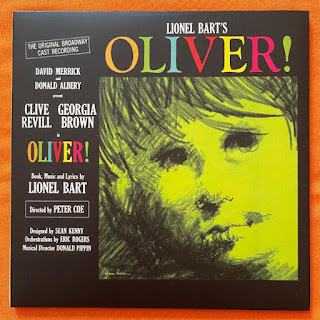 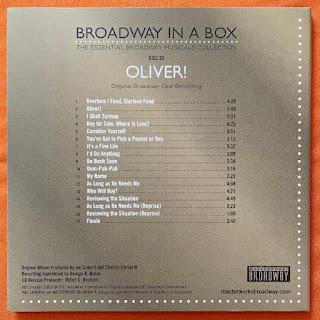 This is a true ensemble show, and its success depends critically on the chemistry among those playing its rich set of characters; in this respect, this recording is generally satisfying. Clive Revill (Fagin) is a near-constant presence, providing cohesion to the show with his authoritative but sensitive performance. The two main children on the recording, Michael Goodman (Artful Dodger) and Bruce Prochnik (Oliver), could not be more different in voice and temperament, but both are effective and even “cute” without being cloying. Among the larger roles, the only real disappointment is Danny Sewell (Bill Sikes); his big solo, “My Name,” lacks the sense of true menace necessary to distinguish him from a run-of-the-mill bad guy like Mr. Bumble (a too-similar-sounding Willoughby Goddard). (Apparently, this recording was made while the show was on tour months before reaching Broadway, which explains why the OBC Artful Dodger, Tony nominee Davy Jones, does not appear on this CD.)

The standout performance on this recording, hands down, belongs to Georgia Brown (Nancy). Her shattering torch song, “As Long As He Needs Me,” reaches astonishing heights of virtuoso singing and real pathos. She also is very charming in conveying Nancy’s rapport with the Artful Dodger and other ruffians in “I’d Do Anything” (currently famous for helping to pitch pet supplies) and “Oom-Pah-Pah.” 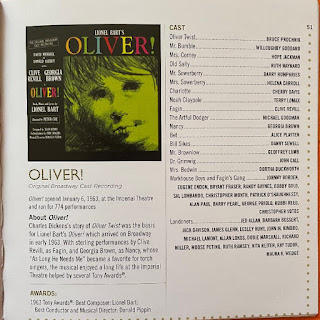 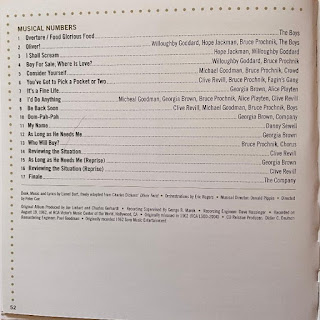 The backbone of the score consists of a series of songs for various combinations of soloists and chorus, including the title song, “Consider Yourself,” “You’ve Got to Pick a Pocket or Two,” and “Be Back Soon.” Even if the composer/lyricist might have gone to the well too many times with this type of song, their realization here is mostly successful. The voices contrast nicely with each other, and the characterizations are vivid enough that, even if the listener has forgotten the details of the story (as I admit that I have), the relationships among the major players are quite clear.

My favorite song in the show, however, is “Who Will Buy?” Built around a complex and chilling vocal interplay among Oliver and a chorus of street vendors, it has a vaguely modernist feel to it that definitely stands out from the texture of the rest of the score. I can’t really think of anything quite like it from other musicals; the closest thing that comes to mind, oddly enough, is “Falling,” a simpler and shorter (but equally weird) song from Aspects of Love.

The CD leaves something to be desired in terms of recording quality; parts of it sound as if it were recorded in a cave, with lots of echo muddying things up. As a result, the orchestra and very frequent choral sections are sometimes not very clear, and the lyrics can be hard to follow, though it helps that they’re often repeated several times. Though this is one of the older recordings in the set, I can’t really blame its issues on that: How to Succeed was even older, and its sound was among the best in the box set.

Next up is the 1966 Music Theater of Lincoln Center Cast Recording of Show Boat.