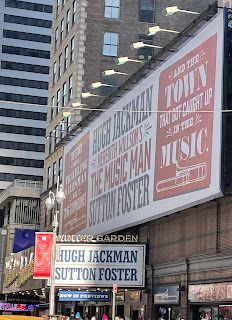 Review of the Saturday, January 22, 2022 matinee performance at the Winter Garden Theatre in New York City. Starring Hugh Jackman, Sutton Foster, Shuler Hensley, Jefferson Mays, Jane Houdyshell, Marie Mullen, Remy Auberjonois, Gino Cosculluela and Benjamin Pajak. Book, music and lyrics by Meredith Willson. Story by Meredith Willson and Franklin Lacey. Set and costume design by Santo Loquasto. Lighting design by Brian MacDevitt. Sound design by Scott Lehrer. Orchestrations by Jonathan Tunick. Choreography by Warren Carlyle. Direction by Jerry Zaks. 2 hours, 30 minutes including intermission. Grade: A
When you walk into the Winter Garden and sit down these days, you are greeted with the enormous wood slat wall painted barn red and festooned with early 20th Century small town advertisements. Its size impresses, its bright color fairly begs you to buy into this slice of Americana. Soon enough, the walls part, and a technicolor world unfolds with scene after scene of American achievement (for better or for worse) bombarding the senses - a train, Main Street, a community hall, and quaint, dollhouse-like homes, complete with framed cross-stitch sayings on the wall. Yes, Santo Loquasto's sets are a feel-good feast for the eyes, and yet they don't overwhelm, are often simple, but always have an eye for the old-fashioned feel one associates with hand sewn quilts. In fact, the huge drops even look like they are made of a patchwork of another quintessentially American thing, steel. Being set on the 4th of July, pretty much everything is draped in red, white and blue bunting. Loquasto's costumes are exactly what one would expect for a traditional revival of Meredith Willson's The Music Man. But that's fine, really. A traditional staging of a traditional musical may be just what we need as we try to return to normalcy. 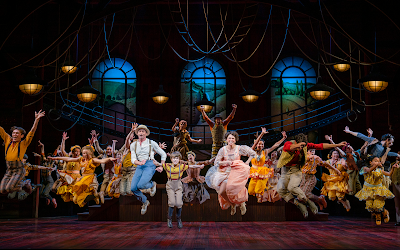 Jerry Zaks has directed a taut, exuberant feast of laughs, and a warm hug of romantic sweetness. He, wisely, I think, lets The Music Man be The Music Man. Actually, with one exception, the entire creative team pretty much stays out of the way. That exception, in the spectrum of things, isn't a deal breaker, but it comes in a rather odd re-do of the infamous "Shipoopi" number. 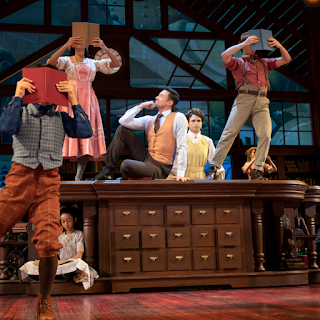 Already a dubious inclusion in any production of this classic, and here it has been practically rewritten/reorchestrated, it brings the entire show to a grinding halt - no small feat considering it opens act two. Warren Carlyle has choreographed the number to within an inch of its life. It feels like it takes an eternity to get through, though it does pick up considerably when Marian finally loosens her corset and joins Harold in a real bonding moment. Don't get me wrong, the uber talented multi-generational ensemble is amazing here, as they are throughout - I'd go so far as to say that, to a person, they are the most exciting ensemble Broadway has seen in years. "Shipoopi" is really an outlier, as the other big numbers are bold, brassy, character-driven thrill rides, particularly with the charming sophistication of "Marian the Librarian" and the showstopping "Seventy-six Trombones." 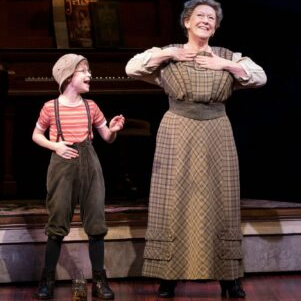 The talent runs deep in this company, where those making their Broadway debut represent the bright future of musical theater, and the seasoned, award-winning veterans prove that they are still bright, shining stars. Among the new generation are two young men who are exciting performers, destined to be household names: Gino Cosculluela as the misunderstood rebel Tommy Djilas - what a dancer! what a presence!, and the absolutely adorable, but so real and so grounded Benjamin Pajak as Winthrop Paroo. To all of their credit - and Zaks' firm hand, I'm sure - not a single child in this production indulges in even the slightest hint of cloying behavior. 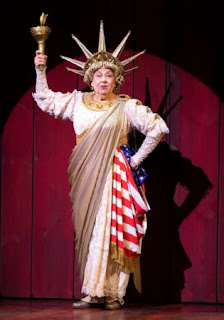 Meanwhile, two of my all-time favorite "groups" are given ample opportunity to set a new standard of delight, which they do. I'm speaking, of course, of the "pick-a-little" ladies and River City Quartet, and every time they sing, it is a burst of joy. The ladies are led by the force of nature that is Jane Houdyshell (she got well-deserved entrance applause the day we saw it). She makes a meal out of every line she utters, and wrings every possible nuance out of Eulalie's signature "Balzac." Another absolute treasure is Marie Mullen whose Mrs. Paroo is a tower of strength with a generous pinch of sass, all wrapped up in a warm hug. She was wonderful. Then there is the always terrific and hilarious Jefferson Mays who's Mayor Shinn is a riot of blustering outrage and incompetence, bulging veins and red face on full display. Finally, it was a pleasure to watch Shuler Hensley have such a ball playing Harold Hill's confidante and co-conspirator. He was having fun making us have fun. 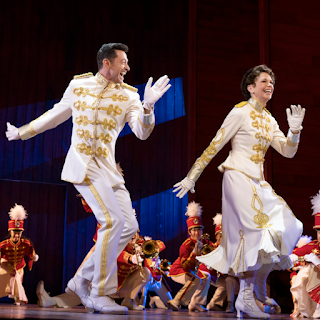 It goes without saying that any really successful production of this show rests in the hands of the music man and his adversary-turned-champion. I think this revival has hit the veritable jackpot. What I most appreciate is that neither Sutton Foster nor Hugh Jackman try to replicate what we are used to seeing. Separately, they are a pair of whirlwind tours-de-force on a well-earned (if inevitable) collision course. 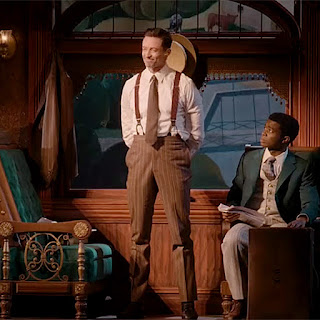 With his billion watt smile and charming sex appeal, Jackman wins over everyone in the building. His song and dance man talents are off the charts, which makes all of his conniving easier to swallow, yet more dangerous perhaps than it is usually played. Normally, a Music Man audience gets to sit in smug delight thinking they'd never be taken by such a trickster, but this time around, the audience is just as taken in as the citizens of River City. The reality of Americans being taken by an unqualified smooth talker full of excuses, diversions, and crowd-pleasing explanations that don't hold up, is what's going on here. Sound familiar? 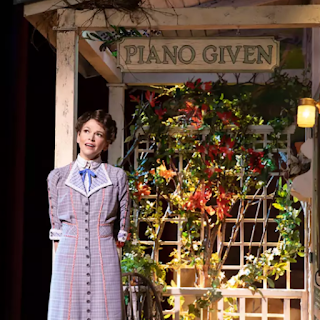 Then there's Foster, who is an inspired choice. Her Marian is not the fussy, nose-in-the-air ingenue with the high register who caves. No, this Marian Paroo is every bit the match for this Harold Hill. Her machinations in trying to expose him as the fraud he is feel much more subversive - witty and smart, not vengeful. Foster also brings considerable depth to the role, at times feisty and aggressive, always protective, and still somehow warm and caring. So what if she doesn't sound like Barbara Cook or Rebecca Luker? I don't think either of them would have worked as well with Jackman. You see, together, their chemistry is palpable but not overbearing, and you can believe that she would follow the big lie because she can see that end justifies means here, when it means that her little brother can be happy and thriving. The closing moments of this version are the first where I've ever really felt like Marian is a part of the fabric of River City, not some unattainable ideal.
I suspect that the next time The Music Man comes around, it may be an edgier production that leans into the score's undeniable rap numbers. (Did Willson write a hip hop musical?) And maybe it won't read like a living Grandma Moses painting, all idealistic and patriotic. I look forward to that. But for now, maybe comfort food Amricana is what we all really need.
📸: J. Kyler, J. Marcus, J. Cervantes
Posted by JK at 6:51 AM