Okay, fellow logo fans! These two are for you.
With both Into the Woods and 1776 set to close up shop on Sunday, we wanted to be sure to take a closer look at their key art. It makes sense to double up, not only for timeliness, but also because they are the first two of the season's big revivals. First up, 1776.
I'll admit at first glance, I wasn't all that impressed by it. I looked to me like a cheap knock-off of the original, with a "revolutionary egg" overlapping an austere 1776. It is a fine line between plain a image and icon. Then, I looked into it a bit more, and there's much more to this one. 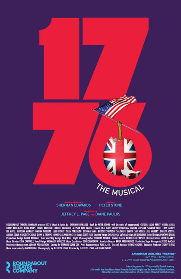 There's the color choices: the bold, imposing numbers in a deep red, reminiscent of power, blood, and, of course, revolution. But how about that dark purple background? A mix of red and blue? I don't think so. How about that in terms of gender/sexuality on the non-binary pride flag, "Purple: Represents those whose gender identity falls somewhere between male/female or is a mix of them." (Source: University of Northern Colorado Gender and Sexuality Resource Center) Purple figures prominently in several such flags. Both are perfectly aligned with the casting and thematic point of this production.
And, finally, a close up look at that egg - a reminder not only of the original production, but of where we started as a country - reveals the flag-waving, patriotic arm is that of a person of color. All-in-all its simplicity reveals a much deeper meaning. Much like the production it represents. Grade: A
Now, Into the Woods:

Let's talk about the colors first, again. Is there anything more eye-catching in the visual cacophony of the Times Square area that bright red? A smart back ground color that, in this case, also serves to heighten the other colors used. Black, yellow and white all stand out against this red.
Visually, the imagery perfectly represents the show and this specific production. Stylized theatricality is the hallmark of this revival, represented by the mysterious barren trees (like on the set) that morph into the folds of a red theater curtain. Then of course, a familiar fairy tale character - Little Red Ridinghood - tells even newbies to this classic what it's about, as she steps behind the curtain into the light. Even the font used for the title - smartly bright white - is both bold and plain, which also mirrors this version of the Sondheim classic. Grade: A
FRIDAY: CD Review: & Juliet
Posted by JK at 7:00 AM