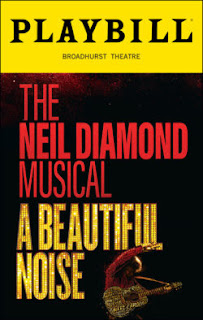 Review of the Saturday, January 14, 2023 evening performance at the Broadhurst Theatre in New York City. Starring Will Swensen, Robyn Hurder, Mark Jacoby, Linda Powell, Jessie Fisher, Michael McCormick, Tom Alan Robbins and Bri Sudia. Book by Anthony McCarten. Music and lyrics by Neil Diamond. Orchestrations and arrangements by Sonny Paladino and Bob Gaudio. Set design by David Rockwell. Costume design by Emilio Sosa. Lighting design by Kevin Adams. Sound design by Jessica Paz. Choreography by Steven Hoggett. Direction by Michael Mayer. 2 hours 15 minutes, including one intermission.
Grade: D+
Growing up, Neil Diamond was always a part of my life. My whole family enjoyed his music. We saw his movies. He was a constant. And so I looked forward to seeing the bio-musical of his life, A Beautiful Noise. Were my expectations too high? I don't think so. Maybe I'm just burnt out on the genre. But the truth is, this latest story-of-my-life show is an uneven mess. What is good is very good, but what doesn't work really doesn't work. 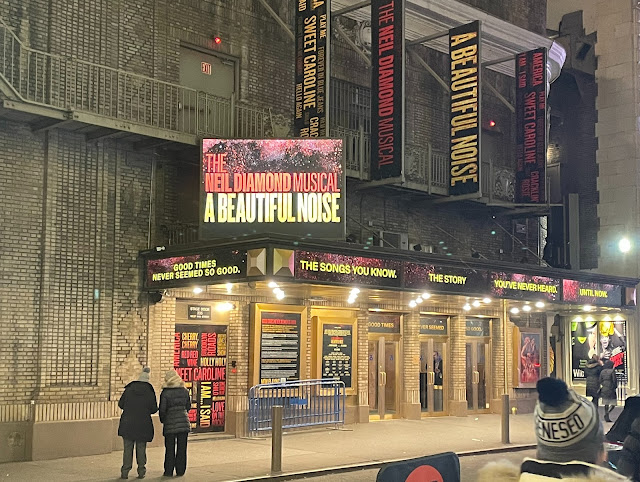 The concept sounds like winner - today's Neil Diamond is in therapy, and through a close analysis of his lyrics, he hopes to find answers to issues that plague him. But after two plus hours of getting down to why the word "king" appears frequently in his ouvre, and the usual litany of relationships succumbing to ambition, fame has its pitfalls, and blaming a crappy childhood on everything, Anthony McCarten's book gets, dare I say it? Boring. Eventually, your mind wanders, waiting for the next song. While not going chronologically through the song catalog is an admirable deviation from the standard, many times, the chronological telling of his life sometimes causes a jarring interruption. Inexplicably, mid-act two, the story takes a disruptive (and unnecessary) turn back to his early childhood. Ugh. Then there's the final excruciating scene - five minutes that felt like twenty - with pregnant pauses long enough to actually give birth. True, it leads to a powerful final number, "I am, I said." (In retrospect, I have to wonder if the number was really that powerful, or if I was just relieved that the scene was over.) The bright spot of this otherwise lacking enterprise is the terrific company, lead by the glorious Will Swensen (Neil-Then), who makes the most of the acting scraps the book gives him, and absolutely blasts star power into the Broadhurst every time he sings. Charisma and an uncanny Diamond sound ooze from his every pore. Mark Jacoby (Neil-Now) acts his ass off (while planted in an overstuffed chair, no less), but it isn't until the very final moments that he really lets go and shows us why he has had a lengthy Broadway career. 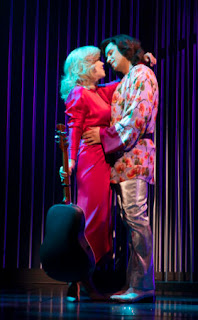 The supporting cast includes Tony-winner Michael McCormick in a pair of funny roles and a fast costume change, Tom Alan Robbins also in a pair of roles, is less impactful through no fault of his. Otherwise, we see the larger number of women that orbited Mr. Diamond, from the blander than plain oatmeal first wife, played by the equally uninteresting Jessie Fisher, and the sassy engineer of his early career, Ellie Greenwich, a delight throughout, played by Bri Sudia, to his muse (and second wife) played with sexy and vibrant finesse by the always magnetic Robyn Hurder. Of these three, she has the most to do, singing and dancing the hell out of each of her numbers, even if they occasionally feel awkward and/or shoe-horned in. "Cherry Cherry" is great, while "Forever in Blue Jeans" is sung and danced well, but is really weird in terms of the book. The less said about her "You Don't Bring Me Flowers," the better. There's also Linda Powell, who does an admirable job in the thankless role of the analyst. Bless her, she makes a meal out of thin air.
The "Beautiful Noise" aka the 10 member dance ensemble is really terrific. Many of them get opportunities to shine individually, but none so brightly as Jordan Dobson, who does leading man quality work with the song, "Shiloh." Jess LeProtto is a stand out dancer as always. As I said, the collective group is aces. Too bad that they are also the physical embodiment of the messy, uneven staging. 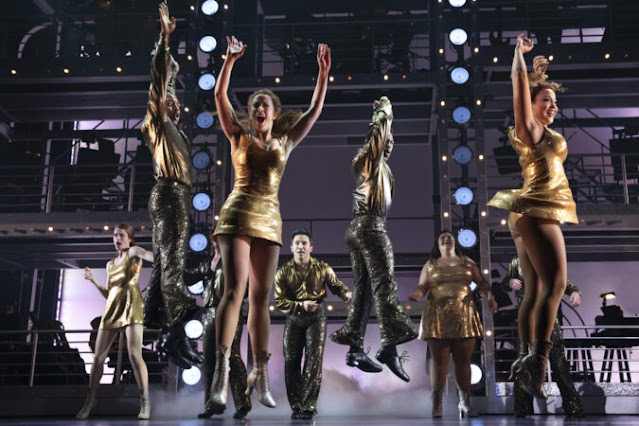 I have always enjoyed the work of choreographer Steven Hoggett, and Michael Mayer is one of my all-time favorite directors. But here, they never quite get a handle on what they want to show to be. Is this a Behind the Music special? A series of Ed Sullivan Show variety numbers? An outright rock concert? It tries to be all three, none fully successfully. Is The Beautiful Noise really parts of Neil's psyche, or are they shards of memories, or just back-up dancers? I guess they are all three. This lack of focused concept and a maddening imbalance of tone is disappointing from these two. 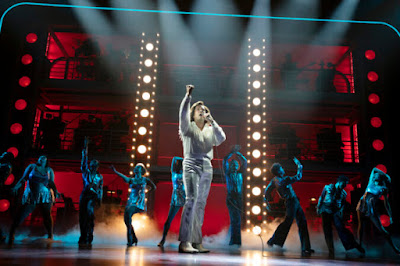 Just like the rest of the show, the design elements are uneven, with lighting designer Kevin Adams doing his usual stellar work. On the other hand, costume designer Emilio Sosa, who can usually be relied upon to create a cohesive feast for the eyes, seems unable to overcome the demands (?) of the concept. Even more shocking is the bizarre scenic design by David Rockwell. Aside from the enormous Hollywood Squares wall of sound, the rest of the set is alternately spare and busy, and consistently unattractive. Jessica Paz's sound design is at best unbalanced, and at worst, so muddy as to make the lyrics incomprehensible. Noise, yes. Beautiful, no.
To be fair, there were several times I found the show enjoyable - mostly when Mr. Swensen and Ms. Hurder were front and center. And the audience ate up every note, at times reacting as though at a religious revival meeting. ("Sweet Caroline" rendered them orgasmic all three times it was presented.) Still, the low points far outweighed the highs. Unfortunately, A Beautiful Noise makes the case for ending the bio-musical parade.
📸: J. Kyler, J. Cervantes
Posted by JK at 6:30 AM