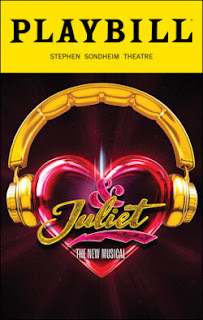 Review of the Sunday evening performance on January 15, 2023 at the Stephen Sondheim Theatre in New York City. Starring Lorna Courtney, Paulo Szot, Betsy Wolfe, Stark Sands, Matt Raffy, Melanie LaBarrie, Ben Jackson Walker and Philippe Arroyo. Music and lyrics by Max Martin. Book by David West Read. Orchestrations and arrangements by Bill Sherman. Set design by Soutra Gilmour. Costume design by Paloma Young. Lighting design by Howard Hudson. Projection and video design by Andrzej Goulding. Sound design by Gareth Owen. Choreography by Jennifer Weber. Direction by Luke Sheppard. 2 hours and 30 minutes, including one intermission.
Grade: A+
& Juliet is proudly, unabashedly a jukebox musical. Heck, there's an actual jukebox center stage and spotlighted at the start and the finish of the show! And just when I was ready to write off such fare, along comes this perfect gem of a show. The entire enterprise has elevated the genre and is now the gold standard of catalog musicals. Everyone involved should be proud. 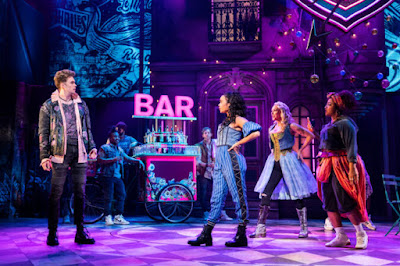 So, what makes this one so much better than the rest? Where do I start?
Well, first of all, it is FUN. Mike and I were grinning fools from start to finish. Neither of us can remember a show since Avenue Q that made us belly laugh as much. It is also very smart. The word play - both obvious, and not so - is irreverent and tricky. Yes, this is a jukebox musical with a good book! Thank you, David West Read. The script is tight, with nary a bit of excess. Characters, themes, and plot twists galore manage what would be impossible in lesser hands: it is Shakespearean and contemporary all at once. And lest my description makes it all sound like a mere ball of fluff, it is so sharp that you'll be constantly caught off guard by just how emotionally invested you are. I know I sure was!
Chances are you've heard most, if not all, of the "score." The song list reads like a Now That's What I Call Music! CD from the 90's and early 00's, with tunes made great by everyone from Beyonce, Katy Perry and Britney Spears to NSYNC, the Backstreet Boys and The Weeknd. But you may not know that one man was behind them all - Max Martin. Some of these songs already appear in another Broadway show, and several are destined to show up in another coming up this summer. But what sets these same songs apart here is that great care has been taken by both Martin and Read to make sure that they function as true musical theater songs, not solely as a fast punchline followed by histrionic Idol-style riffing. Best of all, with this show, we get the whole song, not just a snippet, as well as a few really great mash-ups. (Two are genuine standouts: "Problem/I Can't Feel My Face" - used as a major turning point for characters - and "Teenage Dream/Break Free" - a hilarious, sexy romp worthy of The Bard's cheekiest comedies.) No, the songs are used to develop characters, advance the plot, and create reasons for thrilling production numbers. 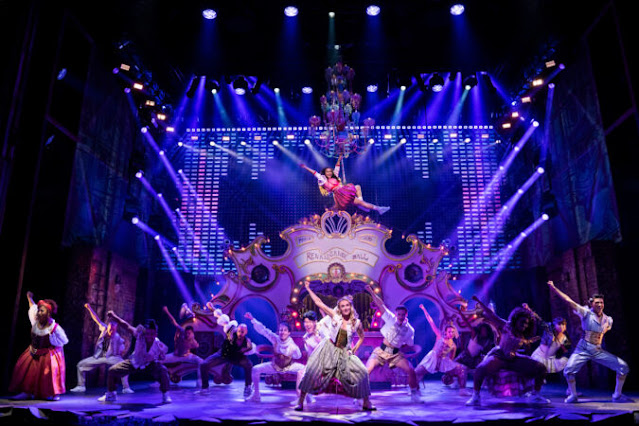 Speaking of the dance numbers, choreographer Jennifer Weber has crafted a slick dance vocabulary capable of seemingly infinite variations. Very much of today, the style also embraces the moves of boy bands and pop divas alike. Sexy, fluid and riveting, Ms. Weber could just be this generation's Fosse (not a comparison I make lightly). Among her most intoxicating creations are the opener, "Larger Than Life," and big numbers like "Blow," "Confident," and "Roar." While we are talking dance, she's also assembled the hottest (in every sense of the word) ensemble currently on the boards. Several are bound to become household names (in the world of Broadway, anyway), including the positively magnetic Bobby "Pocket" Horner, as well as Michael Ivan Carrier, Joomin Hwang, Jasmine Rafael and Rachel Webb. Olivier Award-winning director Luke Sheppard has created an equally exciting staging, jam-packed with gorgeous imagery, and a dizzying array of creative movement - things fly, float and spin, still others are appropriately grounded and conventional. In lesser hands, this could have been a frenetic mess. This has been meticulously crafted, and we are all the better for it. 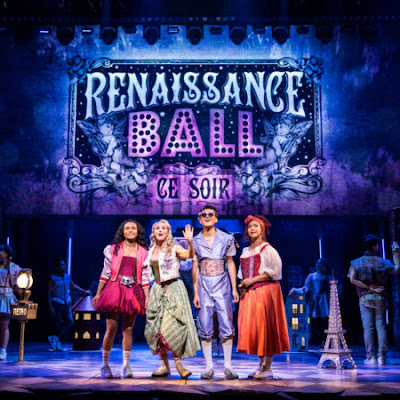 An environment that is wonderfully fantastical, anachronistic and uber-theatrical allows for a world where anything can happen. That's just what you find upon entering the Sondheim Theatre. Channeling such creations as Pippin, Godspell and Barnum, along with a dash of Something Rotten! (and a slick nod to Moulin Rouge!) the designers have created a visual feast. Set designer Soutra Gilmour and video/projection designer Andrzej Goulding pull out all the stops as they add and subtract stunning set pieces and visual effects set against a brick wall/backstage box. The effect is stunning and delightful, and the transitions the design allows are are so smooth and quick, it's like watching a kaleidoscope. The vibrant lighting by Howard Hudson that is a vivid cross between a rave and a rock concert completes the picture. When the cast first appears, Paloma Young's costume designs immediately set the tone that while we are definitely in for a Shakespearean evening, we need not worry that it'll be heavy. Like the settings, the costumes evolve and heighten as the show goes on. The whole thing is a sight to behold. Finally, it is worth noting that Gareth Owen's sound design is perfection. Every word clear as a bell, the loud music in perfect balance with performances. I wish I could say that about a few other current musicals. 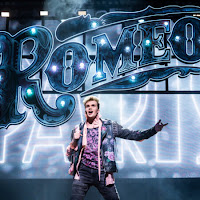 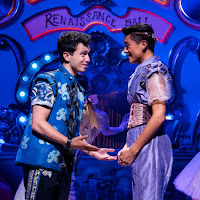 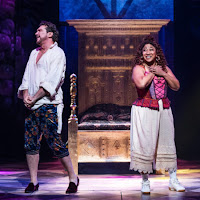 So how about the principal cast in this re-imagining of Romeo and Juliet? Are they up to the plot twists that make Juliet the master of her own fate? Utter perfection from top to bottom, I tell you. As the now less significant Romeo, Ben Jackson Walker has a great voice and a refreshing take on the dumb beefcake trope. He is going to be big after this main stem debut, mark my words! One half of the new pair of star-crossed lovers in this story, Philippe Arroyo is sweet and winsome (I am a sucker for a guy in glasses), and proves the perfect balance to the equally sweet and winsome other half of that pair. Here we had the chance to see a marvelous understudy, Matt Raffy, who nails the emotional core of the plot, and dances their ass off! Tony-winner Paulo Szot is clearly having the time of his life, using his operatic gifts to create many of the night's biggest laughs. Think of it: a world-famous opera star belting "Teenage Dream," and doing boy band moves to "It's Gonna Be Me." He gets to have much of that great time with West End star, Melanie La Barrie, whose sassy take on Juliet's nurse is one for the ages. The two together are an absolute riot! 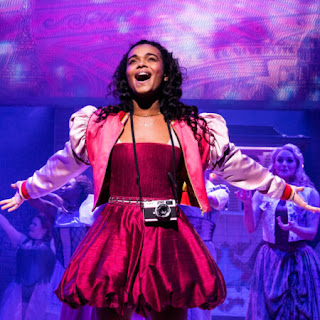 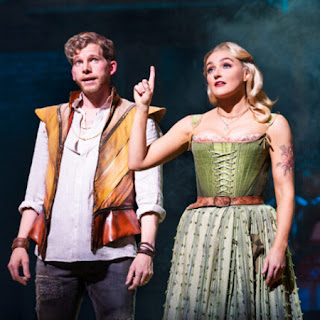 As the titular Juliet, Lorna Courtney has established herself as a bonafide Broadway star. Her vocals are fearless, her timing impeccable, her dancing excellent, and she's not afraid of anything - she dangles off a swinging chandelier while belting her face off, among other stunts. I hope she gets a long run here, and another opportunity to dazzle audiences soon after. The two other leads - as William Shakespeare and Anne Hathaway - Stark Sands and Betsy Wolfe are a welcome sight on the Great Bright Way. Having had the privilege of watching their careers from the beginning, it's always terrific to see them. Here, both are in top form. What a pair! Their chemistry is off the charts, and I don't recall ever seeing them this funny. Their vocals are no surprise - song birds, both - and neither is their acting. But it is this combination that is something to behold.
Actually, the entire combination of all of the musical theater elements on display here is something to behold. It may be a jukebox musical, but & Juliet is a genuine musical in all of the best ways. Dismiss it at your peril. I'm proud to join the legions of "amperfans!"
📸: M. Murphy
Posted by JK at 6:30 AM