TheatreScene Chat: An Interview with LINDSAY NICOLE CHAMBERS of LYSISTRATA JONES (Part I) 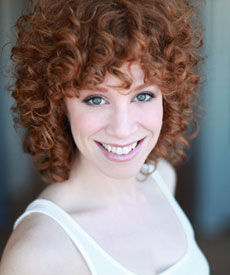 With Broadway's newest musical opening this Wednesday, Broadway veteran Lindsay Nicole Chambers is keeping her eye on the prize.  Having invested a long time - she's been with it from the start in Dallas, when the show was called Give It Up - getting Lysistrata Jones into the best shape it can be and running.  In the show, she plays Robin the sassy and sarcastic library aide at Athens University.  With a healthy disdain for dumb jocks and even dumber cheerleaders, Robin unwittingly finds herself caught up in the war of the sexes, not "giving it up" like the rest of the girls.

Despite a hectic schedule of previews and rehearsals, Lindsay was gracious enough to take the time to chat with me.  Here is the first of two parts to our interview in which she discusses the move of the show to Broadway, listening to Internet chatter about the show and how Lysistrata Jones fits into her growing career.

Jeff Kyler: Thank you so much for agreeing to “talk” with me for JK’s TheatreScene’s first-ever Broadway interview series!  You have been with this show since its production in Dallas, through last summer’s off-Broadway run at the Gym.  Has Broadway always been the goal with Lysistrata Jones?  What was it like to “get the call” that the show was making the leap?


Lindsay Nicole Chambers:  I think Broadway is ALWAYS the goal!  Ha.  Every new production always has Broadway dreams and whispers of transferring, but this show was pretty serious from the get-go in Dallas.  There were important New Yorkers flying in to see the show, so we were really hopeful.  The run with the Transport Group was amazing because it was an opportunity to sort of test the New York waters and New York seemed to love it!  It was absolutely KILLER to get the ‘you’re-going-to-Broadway’ phone call.  I’ve been connected to this show for so long it’s really nice to see it reaching its full potential.  And I’m really glad they didn’t replace me with Kathy Griffin.


JK:  Modern technology is playing a larger and larger role in the promotion and advertising of Broadway shows.  Heck, you wouldn’t be talking to me even three years ago.  Obviously, social networking, Internet websites and the immediacy of it all has its benefits and issues.  Do you read what people are saying?


LNC:  Technology definitely affects our show and every Broadway show (or any creative endeavor) these days.  Everyone with an opinion can post it wherever they want, which is not always the best.  I try not to read anything.  It’s safer just to keep doing your work and having fun and letting people think whatever they think.

JK: Lysistrata Jones is not your Broadway debut.  In fact, you have been in two of my favorite shows, Hairspray and Legally Blonde.  Having been through the whole Broadway thing before is there advice you have given (or could give) to your cast mates?  Is there a pressure there that hasn’t been there before?


LNC:  There are a lot of folks making their Broadway debuts with Lysistrata Jones and I think the main thing we’re all learning (and will continue to learn no matter how many shows we do) is how to do a show for an extended period of time while still having fun, keeping it fresh, not putting too much stock in what other people say, and living your life outside the theatre.  There’s definitely pressure that I haven’t experienced before.  This is my first principal role!  I have a lot more to do onstage than I ever had.  I’m loving it.

JK:  You are also currently appearing in the web series “Submissions Only,” which for me as a theatre fan is a riot and cool look “behind the scenes.”  How did you get involved in that project?


LNC:  I worked with Kate Wetherhead on Legally Blonde and one day she asked me if I wanted to be in this webseries she was writing.  I was thoroughly unemployed and looking for something fun and fulfilling to do and here we are!  It’s been so much fun.  It’s the first time I’ve done a lot of on-camera work, so it’s fun to see people’s reactions to me and the show.


JK:  Of all the shows and related work you’ve done, is there any one (or more) experience that really sticks out as particularly life or career changing?  Who have you had the chance to work with that taught you important life/career lessons?


LNC:  Every show teaches you something different. I’d say this is a career changing show for me.  People are starting to know who I am!  Finally!


Coming up in Part II of TheatreScene CHAT WITH LINDSAY NICOLE CHAMBERS OF LYSISTRATA JONES:


(All Broadway production photos are by Joan Marcus; other photos by B. Thibideaux, B. Gilkas and Getty Images)

NOTE: Lindsay Nicole Chambers is currently appearing in Lysistrata Jones at the Walter Kerr Theatre on Broadway.  Click HERE to go to the show's website, and click HERE for a discount ticket code.  And be sure to see the show.  You will laugh yourself silly!

Rate this blog below and leave your comments there, or email me at jkstheatrescene@yahoo.com, or Tweet me!
Jeff
3.105
Posted by JK at 12:01 PM