Ding! ROUND 1: Why I Am Looking Forward to ROCKY

DON'T FORGET TO VOTE IN ROUND 3 OF THE HOT OR NOT COMPETITION!
THIS WEEK RATE THE CAST OF BIG FISH!
CLICK THE SHOW LOGO TO YOUR RIGHT - THE SURVEY STARTS AFTER THE CAST PICTURES!  VOTE NOW - THE POLL CLOSES AT NOON ON FRIDAY, SEPTEMBER 13!

Five months from tomorrow will be the first preview of Rocky: The Musical.  And I have to admit that the more I read about it, the more I am looking forward to seeing the show.

Rocky and I have an important history together: in 1976, at age 10, I got to go to my first "grown up" movie.  Rocky.  As you might guess, I am not all that into boxing (or sports for that matter, klutz and geek that I am/was), and yet I remember the whole film like it was yesterday.  Perhaps most importantly, it was the first time that I realized that my little isolated small town world wasn't the only place on Earth; that not everyone lived like I did.  And in a time when the country was swathing itself in red, white and blue accouterments of glory and patriotism, it was easy to believe (especially for a 10 year old) that America was a completely free, abundant-with-wealth paradise filled with prosperous heroes, Rocky showed me an America I knew nothing of.  It was gritty, urban (in the scariest sense of the word) and filled will ill-mannered, uneducated people who worked hard, had little to show for it, and had every reason to hate their lives and the country that had clearly let it down.  And the main character LOSES!  And yet, I remember distinctly telling my dad that Rocky was the good guy because he did the best he could even though he didn't have the best training or equipment.  But he had the best people in his life, especially Adrian who loved him even when he was beat up really bad. 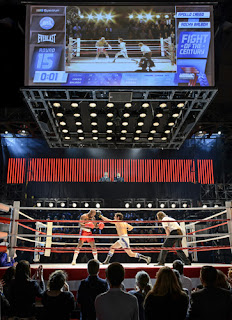 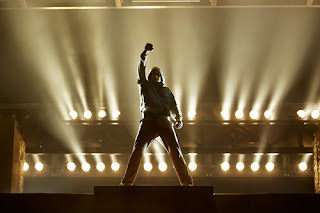 It was the first time I saw and learned that the hero doesn't always win - in fact, losing the fight can make you a winner in real life, anyway.  This was a powerful message shining through a sea of images and messages that told me just the opposite.

Truthfully, I can't sit through more than 10 minutes of any of the sequels.  But the original resonates with me even today.

And so, inevitably it may seem, Rocky will become another movie-turned-musical.  Here's hoping that this time the creative team will stay true to the small, intimate, yet powerful story, bring the important humanity of the piece to the fore, balancing the every-man story with the spectacle of sport. Given the writing team - book by Thomas Meehan, music by Stephen Flaherty, and lyrics by Lynn Ahrens - all three of whom are no strangers to both huge Broadway spectacle and small, intimate theatre, I feel very optimistic that they will find every way they can to make each moment musical and theatrical.  And I am sure they will surprise us, too.  And add one of the most vibrant and modern story-tellers at the helm, director Alex Timbers, and one of the most unique specialists in movement and dance, choreographer Steven Hoggett, and I can only imagine what a visual feast this will be.  The pictures from the original German production look like an interesting mix of iconic images and scenes that show a theatricality that celebrates all the things that live theatre can do that film can't.

I am optimistic and hopeful!