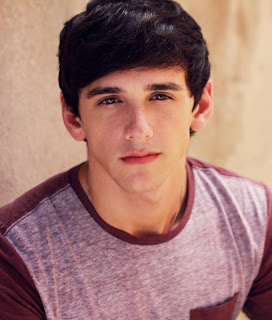 For musical theatre fans the New York Musical Theatre Festival each offers the chance to see the future of the art form.  Every time you enter one of their venues, you can feel the anticipation and excitement in the air, as if we are about to be present at the birth of "the next big thing."  Another thrill for fans is seeing accomplished and beloved theater stars working on these brand new projects alongside the newest generation of working theater actors.  This past summer, I had the privilege of seeing the show Crossing Swords, a perfect case in point: the show was as fresh as spring air and featured one of Broadway's most respected musical actresses, Linda Balgord (Cats, Passion, The Pirate Queen), working hand in hand with up-and-comers including Ali Gordon and Marrick Smith.

Recently, I had the pleasure of interviewing another young actor form that show, Lyle Colby Mackston, who was nothing less than dazzling in his role.  In his young life and growing career, he has already amassed an amazing resume - everything from concert appearances at Joe's Pub, to regional productions, including Spelling Bee, and workshops that have allowed him to work with no less than Bono, Julie Taymor, Brian Yorkey and Sting (see photo below)!

In this first part of our interview, Lyle talks about the process and rewards of doing an NYMF production, working with Ms. Balgord, and being there at the very beginning of Spider-Man: Turn Off the Dark. Plus, he answers a few of your questions!


Jeff Kyler (JK): Hi, Lyle!  Thanks so much for taking time out of your busy schedule to talk with me.  Congratulations on your most recent success, the NYMF full production of Crossing Swords!  It won several end of festival awards.  What about the show do you think resonated so much with audiences and critics alike?

Lyle Colby Mackston (LCM): I think the driving force of the audiences' resonation stemmed from the musical's enormous heart. Crossing Swords has the unique ability to speak to both the older and younger generations because of how relatable each character is. I believe everyone can connect with at least one character in the show or at least to one of the many situations the characters are put through.


JK: In the show, you played Jeremy, a high school senior who is secretly in love with his best friend, David.  Over the course of the drama, Jeremy becomes involved in a love triangle, which eventually causes him not only to admit his feelings to David, but come out of the closet completely.  Though the show took place in 1969, clearly it has relevance today.  Do you think that coming out stories like Crossing Swords might have lost some of their impact, given the huge strides in gay rights and marriage equality of late?

LCM: As much as I’d like to say that coming out is not as hard as it used to be I’m afraid that is not the case regardless of how far the gay community has come in the recent past. Yes, I suppose it is more socially acceptable in specific locations, but I feel the world is nowhere near where it should be when it comes to opening their hearts and minds to their fellow man/woman’s true self. The fact that certain people still firmly believe that homosexuality is a choice is down right mind boggling to me. One day, this will not be an issue…hopefully that day comes sooner than later.

JK: From audition to performance, how long was the process of producing Crossing Swords?  How is the overall process of doing a NYMF show different than working on a full, more “permanent” production?

LCM: I believe I was the last piece of the casting puzzle and was offered the role 2 weeks or so before the rehearsal process began. Once rehearsals were underway, we had roughly 4 weeks and not even a full day of tech before we opened for an audience. What makes a NYMF production different from a more “permanent” production is that the book, score and characters are constantly changing everyday being that it is a brand new production, so it tends to keep you on your toes and forces your creative juices to flow while simultaneously giving you plenty of homework. We also didn’t have a “tech week,” which is pretty standard with a more permanent production. I’ll be sure to let you know how our process goes when Crossing Swords becomes a “permanent production”. ;)

JK: Ever since I started my blog, Spider-Man: Turn Off the Dark has been a pretty constant source of material, so I was pleased to see that you were a part of the long process in getting that mega-rock-musical to the stage!  Where in that whole process did you get involved?  Which part were you, and what did this entail exactly?  What do you think the creative team and producers got from this step?  What did you learn from this experience?  Have you seen the show since it opened?  If so, do you recognize any of it from when you were involved?  What do you think of the end result?

LCM: I started Spider-Man: Turn Off the Dark when I was 16, in the summer of ’06 with a 2-week workshop and reading. I played the role of Grim Hunter in the “Geek Squad” alongside TV Carpio, Nick Blaemire and Michael Wartella.  The reading/workshop cast consisted of Evan Rachel Wood (MJ), Jim Sturgess (Peter) and some Original Broadway Cast members of the current production. Post workshop, we recorded a broken demo of the show for producers/backers/anyone interested in furthering the show. My experience on that project was incredibly rewarding. I got to work with a Tony Award-winning director, on top of working side by side with one of the biggest rock bands in the world. I was fortunate enough to see both versions of the Broadway show, pre/post Julie Taymor, and it was what I always thought it would be: a dazzling spectacle. It was pretty awesome to see some of the original material fully executed on one of the biggest Broadway stages in NYC complete with areal fight choreography and villainous costumes. All I had in the reading/workshop rehearsals was my imagination. The show is an obvious success despite its unfortunate injuries. They are sold out every night so they must be doing something right.

JK: So, before we finish up this first half of our interview, let’s go back to Crossing Swords.  You co-starred with one of my favorite stage actresses, Linda Balgord.  (I’ll show my age by saying I remember her as Broadway’s last Grizabella in Cats, and as Norma Desmond in the National Tour of Sunset Boulevard)  What did you learn from working with her?  What do you think she got from working with three cast members of the “new generation”?

LCM: Linda Balgord is…the best and was an absolute pleasure to work with! Linda, or Linder as I call her, was so quick with the joy and comedy in and out of the script that it was almost impossible not to learn from her. Every scene she did was like a master class in ferociousness. She really knows how to demand a stage with the power of stillness. I’m not sure of what to say when asked what Linda learned from us 20 somethings, she’s a pro, if anything we learned from her.

And now, Lyle answers some of YOUR questions:

From Jenna C. from New York, NY:  I loved Crossing Swords, Lyle!  I especially loved the scenes that included my favorite classic play, Cyrano de Bergerac.  Did you read the whole play to prepare for those scenes?  Would you rather play Cyrano, Christian or Roxanne if a full production of the play and why?

LCM: Jenna, I’m so glad you enjoyed our show! I actually did not read the full script of Cyrano to prepare,  but I did do my fair share of research on the play. I wanted a fresh take on the material with a brief understanding of its background. If I had the opportunity to take part in a production of Cyrano de Bergerac I would hands down prefer the role of Cyrano. Like Jeremy, Cyrano has so many layers to play with and that’s where the fun begins for me. Good question! 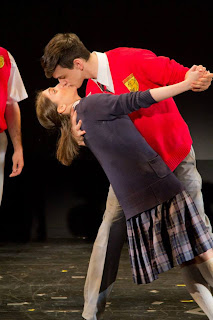 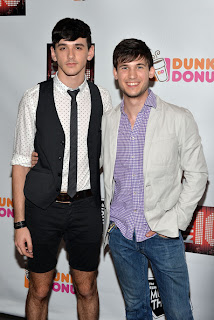 And from your Crossing Swords cast mate, Ali Gordon: On a scale from 1 – 10, how beautifully distracting is it to work with Ali onstage?  (Of course, you HAVE to explain!)

LCM: Ali and I have an incredibly unique relationship where we talk to and about each other in opposites. With that said, on a scale of 1-10 I’d have to give Ali a 1, because I hate her. Translation: 10 because I LOVE her. One of the many benefits that’s come with being a part of the Crossing Swords Team was the relationships that formed within our cast. They all have a special place in my heart.

Look for Part Two of this interview next Monday, September 16!

(Photos of Crossing Swords from NYMF, others courtesy of Mr. Mackston.)