CD Review: Aaron Tveit Live at 54 Below: The Radio in My Head

Aaron Tveit looks great.  He is, not to put too fine a point on it, sexy as Hell.  I've had the luxury of seeing him perform live in several shows, including next to normal and Catch Me If You Can, where his natural suavity and sexiness serve him well, and where both characters benefit from his also naturally cool detachment.  But what might have earned him a Tony nomination for the latter (and maybe even a decent run) would have been a lot more charm and charisma.  And to be completely honest, I'm pretty sure it was his total cuteness and slightly wooden ways that made him a better than decent Link Larkin in Hairspray.  Unfortunately, an audio CD of a live concert like this one takes away his sexy bod, killer smile and oh so hot chin dimple, and leaves only the singing and the between song patter.  Translation: The Radio in My Head reveals an uneven vocal quality (surprising for a vocal music student) and an awkward, cool and detached way of speaking to an audience clearly filled with his fan girls, and his fan boys, who get really quiet during his several songs about the ladies. 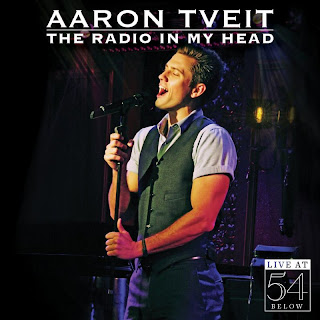 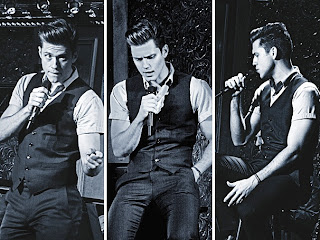 What really works here, not too surprisingly, are his renditions of songs from his original Broadway shows; "I'm Alive," which starts the show, and "Goodbye," which ends the show, are particularly excellent.  And his song choices are uniformly interesting - he draws from Billy Joel, Joni Mitchell and Garth Brooks/Bob Dylan.  And, especially with the latter, his interpretation shows that with some seasoning, he will be a decent singer without the net of a big splashy musical around him.

What doesn't really work is when he takes on songs from other shows that reveal his lack of maturity as a song stylist; both "If I Loved You" and "My Romance" are awkward and a bit embarrassing to listen to.  But he even struggles with the youthful "Something's Coming" and, believe it or not, "One Song Glory."  He cracks and goes flat throughout the disc, but nowhere is it more noticeable than during the West Side Story classic. (To be fair, the band, doing an uneasy jazzy version of the song, probably got him off on the wrong notes.) And despite his obvious love of the song, the RENT number comes across like he is trying too hard to sound edgy and all "rock 'n' roll."

But, and this is largely his lack of experience showing, even worse is the uninspired and often cringe-worthy patter.  The thread of the evening is that he's taking us through his career starting with high school through today, highlighting the important music that makes important life-moments clearer to him.  Sometimes it works - he sings the Dylan song via a Garth Brooks version to let us know how important music is to his father who convinced him to try for his dreams at such a young age.  Other times, as when he sings "I Could Be In Love With Someone Like You," as a tribute to friend and co-star Norbert Leo Butz, "because he sang the same song in his 54 Below concert," the connection to the theme is very weak.  And then there are the times when he abandons the theme altogether, as when he sings the very unfunny (I actually blushed in embarrassment as I listened) "We Are Never Ever Getting Back Together," because he "loves pop music" (insert fan girl 'whooo's here).  You can tell he thinks he's being funny here, as he giggles occasionally, much to the delight of his adoring minions.  He's not funny.  At all.  I will never ever play that track again.  And don't get me started on the all too inevitable The Last 5 Years selection.  I just don't get the appeal... 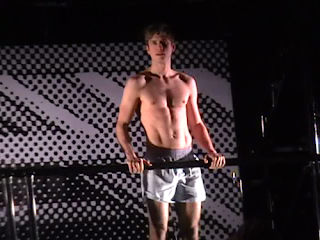 As I said, he is beautiful to look at (check out his arms on the CD cover), and I'm guessing that the eye helps the ear forgive a multitude of sins.  Concerts may not be Mr. Tveit's genre just yet; maybe after he's lived a little more, and successfully plays a few roles that require more emotional depth, which may improve his song stylings down the road, then he can try again.   Until then, I'll be happy with my shirtless Aaron Tveit as Gabe picture.

(Photos from the CD by Broadway Records)