CONTEST: WIN TICKETS to A TIME TO KILL 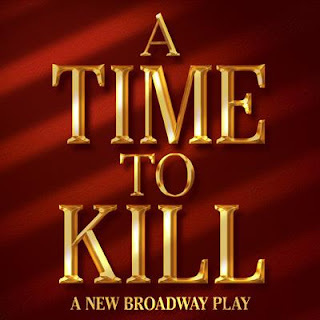 THANKS FOR PLAYING!  THIS CONTEST IS OVER.  THE CORRECT ANSWERS TO THE TRIVIA QUESTIONS ARE HIGHLIGHTED BELOW.  LOOK FOR ANOTHER CONTEST SOON!

Given the pedigree of this new play, it is no wonder there is a lot of buzz about A Time to Kill.  I can't decide what has me most excited.  Is it that it is based on one of my favorite books?  Or that it was turned into a play by one of my favorite writers?  Or is it the stellar cast that has been assembled to bring new life to the work?  I'm going to go with ALL THREE!  And now, I'm so excited to bring you this chance to win tickets to the show!  In order to win these tickets, you'll need to submit your entry no later than Saturday, September 7 at NOON!

A Time to Kill, the popular courtroom drama, tells the emotionally charged, now-iconic story of a young, idealistic lawyer, Jake Brigance, defending a black man, Carl Lee Hailey, for taking the law into his own hands following an unspeakable crime committed against his young daughter. Their small Mississippi town is thrown into upheaval, and Jake finds himself arguing against the formidable district attorney, Rufus Buckley, and under attack from both sides of a racially divided city. This drama is a thrilling courtroom battle where the true nature of what is right and what is moral are called into question.


“For almost a quarter of a century, A Time to Kill has captivated readers with its raw exploration of race, retribution and justice,” said John Grisham in a statement. “It was my first book and the first that I have allowed to be adapted for the theatre. Rupert Holmes did an excellent job of translating it from the page to the stage, and I am happy that not only my loyal readers, but a whole new audience will be able to experience this story in live theatre. I am looking forward to opening night on Broadway!”


“There is a great tradition of courtroom dramas in American literature and I'm thrilled to be a part of the Broadway premiere of a new addition to the genre,” said director Ethan McSweeny in a statement. “We have assembled a superb cast of actors with enormous depth to their careers each of whom will contribute something special to bringing to life the vivid tapestry of John Grisham's Mississippi and Rupert Holmes' gripping adaptation for the stage.”

1.  A Time to Kill is based on a novel.  As of September 2, 2013, how many currently running Broadway shows are based on novel?

A. None
B. One
C. Two
D. Three (The Phantom of the Opera, Wicked, Matilda)

2.  Rupert Holmes has written all of the following on Broadway EXCEPT:
A. Curtains
B. The Mystery of Edwin Drood
C. Deathtrap
D. Accomplice

3.  A Time to Kill co-star Tonya Pinkins won her Tony Award for which show?
A. Caroline, or Change
B. Jelly's Last Jam
C. Radio Golf
D. The Wild Party

MORE ABOUT THE SHOW: ONLINE/SOCIAL NETWORKS