On September 3rd, The Washington Post ran an article about the injury of the lead actor in the Signature Theatre production of Miss Saigon and his replacement, Gannon O'Brien.  It is serendipitous, indeed, that this information came to light just as I was writing the review you are now reading.  That he went on for the third preview (which I attended) with almost no rehearsal and without script in hand certainly adds a lot to the background of his terrific performance - that he got through it is miracle enough - but I can honestly say that knowing what I know now doesn't change a word of what I have to say about his work.  His performance was as deep, thoughtful and fully rendered as anyone else in the company, if not more so.

Though he struggled a bit with some of the higher notes, Mr. O'Brien never missed a cue, a word, a lyric, and completed the sometimes intricate blocking with a definite self-assurance.  It never felt like an understudy performance, let alone one with no rehearsal.  And it is a real tribute to both he and Diana Huey, who plays Kim, that their chemistry was palpable, bringing most of the audience to tears at the crushing finale of this epic tragedy.  Ms. Huey is a stunning Kim, a curious mix of innocence and a life slowly wizened by the horrific choices she has to make in order to survive.  Her voice and performance are thrilling, passionate and mesmerizing; she has us in the palm of her hand from her first timid dance steps as a call girl in a seedy Saigon bar.  Both actors playing these ill-fated lovers, to their considerable credit, keep their performances grounded in reality, resisting the urge to succumb to the musical's larger, more melodramatic moments.

Balancing that reality with the operatic scale of the situation is the framing device of The Engineer, part narrator, part antagonist, part protagonist (an element that some others I've seen in the role seemed to have missed) played with equal parts sleazy glee and human survivalist by Thom Sesma.  His performance is sheer brilliance - one of the best I've seen of many productions of the show.  He prowls the stage like he owns it, and handles his charges (and us) like our lives depend upon his every action.  Best of all he sings and acts seamlessly; that is to say one segues into the other and back again as if bursting into song and interrupting it with spoken words is as natural as breathing.  Culminating in the show-stopping "The American Dream," Sesma brings home the show's darkest, most disturbing themes, just as the Engineer should.

The supporting cast, unfortunately, doesn't rise to the level of the leads, most noticeably from the opening scene, "The Heat is on in Saigon/The Movie in My Mind," where the cast seems to be merely going through blocking and not feeling it.  Chris Sizemore, as Chris' war buddy, John, is rather rote, almost robotic, with nary a genuine moment.  Throughout, he seems devoid of any intensity (the fall of Saigon is a mere inconvenience to this guy) or much passion (the plight of the Buy Doi seems even more an overwrought infomercial than ever before).  Cheryl Daro's Gigi registers as tired, as in maybe Miss Daro didn't get much sleep the night before, not as in Gigi is worn out.  I've never heard a less emotional "Movie in My Mind."  Christopher Mueller's Thuy is more grumpy sour puss than dangerous tyrant.  He has a decent singing voice, but has almost no presence - not a good thing for the villain of the piece.  And I think it better to just state that Erin Driscoll plays Ellen and leave it at that.  (She sings the American premiere of the song "Maybe," a non-starter of a song, boring and lyrically inept at best, and no fault of Miss Driscoll.  The song feels exactly like what it is: something more to do for the still under-written role of Ellen.  It adds nothing but 3 minutes to the show, and brings it to a grinding halt.) 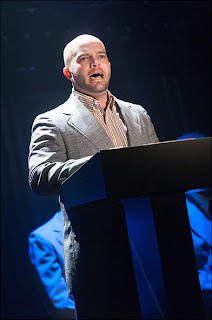 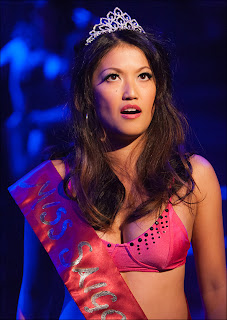 Chris Sizemore as John and Cheryl Daro as Gigi

It is to entirely to the central trio's credit, too, that they aren't overwhelmed by the sheer magnitude of this ambitious, if over-hyped production.  Advertised as a Miss Saigon that "you've never see it like this.  And you never will again" is a bit of a stretch.  The much touted "environmental production" is really no more than a unit set with torn parachutes draping everything overhead into the seating area, with some sound effects of planes doing fly bys, and, in the climactic fall of Saigon scene, a light (and I do mean light, like they cranked up the AC briefly) breeze hits the audience as the "helicopter" descends.  If you saw the most recent Follies revival, also directed by Eric Schaeffer, then you know exactly how "environmental" Miss Saigon is.  Given the history of such productions like Cats and the Roundabout revival of Cabaret, and the recent Sleep No More and Here Lies Love, the slogan reads exactly like what it is - hype - with a disappointing delivery.  One has to wonder why we aren't alternately being assaulted by GI's and Viet Cong scoping out the seating area like it is the jungle battlefield of the war.  Or why the girls and the Engineer aren't actively showing off their "wares" to us like we are just so many more GI's in Saigon or tourists in Bangkok.  It is true that I've never seen this show on a unit set, but something tells me it isn't the first or last to do so. 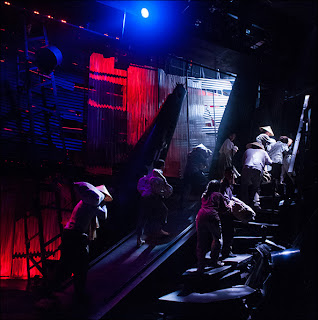 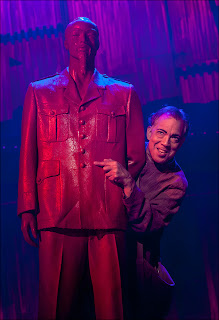 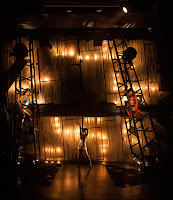 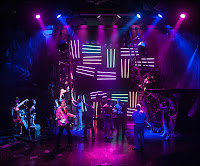 Be that as it may, I don't mean to downplay the accomplishments of the design team, all at the top of their game.  That intricate unit set, designed by Adam Koch,  features moving panels, elevating and levitating ramps and scenic platforms that whisk on and off creating a cinematic, sweeping tapestry of ever changing scenes and points of view.  Chief among its details are a disturbing array of broken military rubble - broken jet engines, the wing of an actual airplane, an ominous pair of light towers, and not one but six statues of Ho Chi Minh.  I mean, if you can't go huge, why not go with quantity, right?  Chris Lee's gorgeous lighting (sure to win a Helen Hayes Award) is moody, colorful and dark in disturbing ways.  He not only creates and enhances the mood of each scene, he brings the both the large scale and intimacy of the piece to the fore, using both light and shadow to make his point.  Perhaps the biggest asset to this production is the full orchestra, under the capable direction of Gabriel Mangiante, bringing the Broadway orchestrations to life.  Wow!

Despite his knack for hyperbole as Signature's Artistic Director, Eric Schaeffer has directed this piece with a sure hand and a keen eye for bringing all of the theatrical elements together.  Just as the lighting and scenic elements create a palate for large scale grandeur and romantic, intimate moments, so too, does Schaeffer's  detailed direction.  So seamless and natural is the overall staging that you don't notice (most of the time) that direction has been given at all.  And then there are the sublimely "stage-y" moments, like the fall of Saigon and the transition to post-war Asia in the Bangkok scenes, each epic and thrilling.  One of the absolutely best moments of the whole production is the tense, gripping "Morning of the Dragon," aided by some truly amazing, chilling choreography by Karma Camp, who also provides some nice dance touches throughout, from the opening moments of the Miss Saigon contest and the equally nasty Dreamland scene, to the beautiful serenity of the wedding scene, and the razzle dazzle of "The American Dream," which includes a powerful nod to American excess with moves from "One" from A Chorus Line, the ultimate in Broadway at the time.

And so, while some of the supporting roles leave much to be desired, and the threat that we will never see Miss Saigon like this again is never fully realized, this is still one of the best productions of the show I have seen.  And to think one of the leads did it with little practice.  I can only imagine how great he has gotten in the intervening weeks.  If you can get down to the DC area, Signature Theatre is always a safe bet; but Miss Saigon shouldn't be missed.

HERE is a link to the referenced Washington Post article.