When a Show Closes... 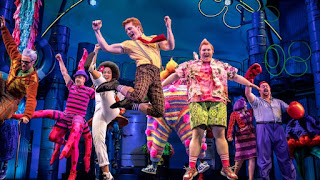 Earlier this week, SpongeBob SquarePants announced a closing date of September 16.  That's 10 weeks from now.  As with any show closing announcement, I'm always intrigued by the reaction to it. Intrigued, but not surprised. The reactions are virtually all the same:

1. "I'm so sad! Thinking of all the cast and crew who are losing their jobs."

5. "It should never have been on Broadway to begin with."
It is always disappointing when a show you love closes. I totally understand that - especially when you don't get the chance to see it again. I'm still missing my second chance to see American Psycho. But after nearly 35 years of theater-going, I've learned to take solace in the fact that if shows don't close, there's no room for a potential new favorite show to play. I try to remember that if Fun Home hadn't closed, the fantastic revival of Once On This Island wouldn't be where it is now. I miss the three Alisons for sure. But I'm so happy I got to meet Ti Moune, Daniel and four gods!
Posted by JK at 7:30 AM

Labels: closing, Fun Home, Once On This Island, SpongeBob SquarePants