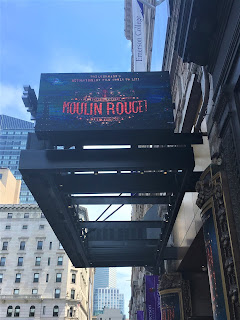 CAUTION: THERE ARE SPOILERS AHEAD.

When we got the tickets for Moulin Rouge, the matinee we chose would have been a preview two weeks or so into the  show's run at Boston's Emerson Colonial Theatre. Alas, that was not to be after a construction accident pushed performances back by several days, making our tickets for only the fourth public performance. After a similar situation several years ago with Women on the Verge of a Nervous Breakdown, Mike and I were feeling some trepidation about what we might see. Turns out we worried for nothing - the show was performance ready and very polished. Save for a glitch with a troublesome curtain, things went off without a hitch. Was it perfect? No. But it is already better than a lot of shows currently on Broadway.

Seeing as we saw the show a full two weeks before its official opening, and that we sat behind a producer and choreographer Sonya Tayeh with her assistants, all of whom were taking copious notes throughout, I am certain that they are actively working on the show. My (few) criticisms may very well have already been addressed since we saw the show. But here they are... 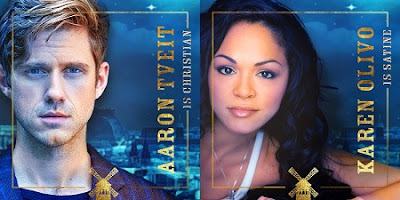 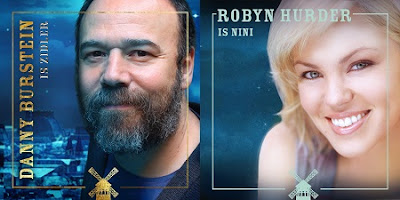 Generally, I think most of the songs added really work - "Fun" and "Firework" were both enjoyable additions, as were "Rolling in the Deep" and a song by P!nk whose name escapes me at this point. (Excellent musical work throughout by Justin Levine.) I've read in the chat rooms that some take issue with the fact that the audience sometimes laughs when they hear a sing they recognize. Many times it is meant to be funny. But it seems some have forgotten - or weren't even alive yet when the film came out, the film audience laughed in just the same way.  I know I did. And when Mamma Mia! was a new thing, the audience reacted in the same way. But I don't think people are laughing at the show necessarily, but rather at the unexpected delight of "naming that tune" and/or laughing at the clever fit of the lyrics to the situation (most of the time).

Also, I think the book (by John Logan) needs some tightening - the show runs longer than the film, but for the most part, I like the changes, particularly the Duke storyline (except, of course, what I mentioned above). It is more serious and appropriate to today's climate. I'm of the camp that believes a too strict adherence to a the movie in a film-to-stage adaptation is not a good thing. I think, for the most part, the beloved aspects of the film are there, but it also makes changes that capitalize on what a live stage performance can bring to the table. 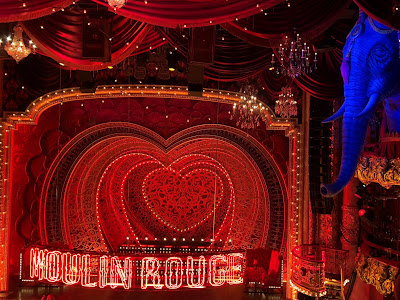 Alex Timbers' direction is slick and mostly well-paced, and again, I think he's really found a good balance between honoring the film and creating something new. It is a massive production and he handles it deftly. You'd never know this was only a 4th preview. And frankly, Ms. Tayeh's choreography is among the best I've seen in years. No two numbers look the same, and the variety of styles she employs are jaw-dropping; still, the choreography feels very cohesive. The Tony is hers to lose, no matter what season the show makes it to New York. Design-wise, the show is absolutely breathtaking. The set, when you enter the house, is even more impressive live than the picture they released. Derek McLane's work is just as stunning and detailed throughout the show, and Justin Townsend's alternately colorfully vibrant and darkly moody lighting adds to the spectacle. And Catherine Zuber's costumes are absolutely stunning. You get more than your money's worth here!

The entire company is top notch, including a first-rate, triple-threat ensemble. Not only can they act and sing, they are unbelievably skilled dancers. Particularly of note is the "Roxanne" tango and the mega-number that slips into Britney Spears' "Toxic" (there is no song or scene list in the Playbill). And a special shout out to the "Lady Marmalade" quartet (Robyn Hurder, Jacqueline B. Arnold, Holly James and Jeigh Magjus) who are the personification of "fierce." 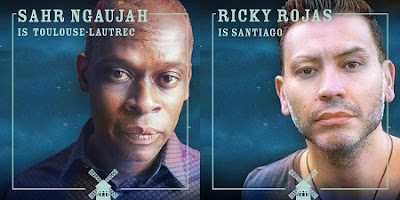 Supporting actors Sahr Ngaujah (as Toulouse-Lautrec) and Ricky Rojas (as Santiago, the Argentinian) are delightfully quirky, and add something great to every scene they are in. The principals are all excellent - and I can only imagine how much more impressive they will be when they have had even more time with the material. The score is gloriously sung by all involved. I am already looking forward to seeing the show on Broadway when their performances are fully prepared and sussed out. Suffice it to say that Mr. Tveit, Ms. Olivo, Mr. Mutu and Mr. Burstein are in top form and well on their way to really great things.

Finally, I was really tickled by all of the fun Broadway Easter eggs. Some are obvious - nods to Cabaret abound. Others are cleverly "insider" - like the choreographic tribute to the audition sequence from A Chorus Line. And you really have to know your Broadway stuff to catch the Great Comet thing...

I've heard that the plan is for the show to come into New York this time next year.  They are really close as it is.  I hope they keep working on it in the direction they are headed. I know I'll be there.