The Battle of the Bands... 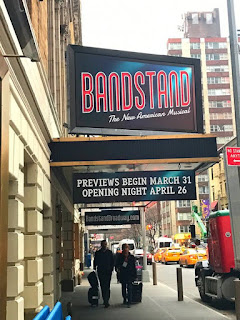 As many of you know, I love finding trends in a Broadway season. From actual trends like the proliferation of jukebox musicals and the "American Idol-ization" of musicals to fun "coincidence" trends, like last year's "volcanoes in musicals" trends, there's always something to notice. There's a current "trend" that has been on the horizon since season before last when Bandstand was at the Jacobs. (Mike and I have been joking about it since then at least...)

Yes, it is the much-discussed Battle of the Broadway Bands! You know... The Band's Visit, The Boys in the Band, and the soon-to-start-previews Gettin' the Band Back Together. Imagine all of the extra hi jinx that could have ensued had Bandstand managed to stick around!

Leave it to producer Ken Davenport to capitalize on this, with a "PSA" with a very game, very funny Laura Osnes pleading for calm during this "crisis," even pointing out that she should know what to do as a former star of Bandstand.  And you gotta love the "testimonials" included, too. Even Broadway loves fake news!

The cynic in me wants to say that, while this is funny (and a clever way to generate some press on a show that no one outside of the Broadway community has even heard of), it is also a shame. Why? Because it's funny 'cuz it's true. 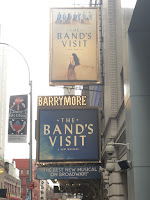 I'm sure there will be people who will mistake one show for the other when ordering tickets (all three are on Telecharge) or picking a show from the Times listings. And I really feel for the box office people at all three theaters who will field questions (at the Barrymore: "Is Marilu Henner in the show tonight?"), all of the house staff who will have to listen to all the red-hatters who have tickets for the Booth, but meant to get tickets for the Belasco... At least we'll be down a Band in a few weeks. And at least people who meant to see Gettin' the Band Back Together will see a great musical if they end up at The Band's Visit by mistake.

I think Gettin' the Band Back Together has other P.R. problems. I hope they address them with the same humor. But that's for another day...
Posted by JK at 7:30 AM