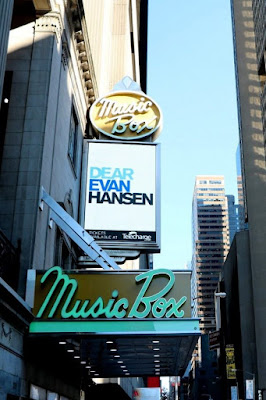 I think the biggest theatrical surprise I've had in years came to me this past Sunday when I saw Dear Evan Hansen. You see, I had seen the show once before, off-Broadway at Second Stage, and I hated it. What a difference a few tweaks and uniformly better performances from a (mostly) different cast can make. I understand now the obsession people have with this show, from teens directly relating to the main character, to parents understanding/dreading the realities of child-rearing in the 21st century, to adults like me, who can remember feeling helpless in high school and having enough distance to understand the really bad things social media can do to relationships. I still have some qualms about the too pat ending and the overly optimistic lack of consequences. And I still think that the music (not the fantastic lyrics) of Benj Pasek and Justin Paul has a generic, monotonous feel to it more times than not. But after what I witnessed the other day, those qualms are more than made for by the passionate performances of the current company.

The technical elements of the show were and are perfect for this show. David Korins' use of set pieces instead of literal sets allowing the unrelenting bombardment of social media screens to be in constant view is typical of his brilliance. Those projections, by Peter Nigrini and the lighting by Japhy Weideman are practically a character unto themselves. The tight, economical staging by the great Michael Greif is reminiscent of his masterful work on Next to Normal. And this time around, I was able to fully appreciate his work. He has a real knack for helping an audience understand a world where the primary characters are emotionally challenged and challenging.

I don't envy Samantha Williams and Roman Banks who play very unlikable characters. It must be difficult to be so on the nose in portraying exactly what is wrong with many teenagers today. One, a jerk who plays at being a friend, then has the gall to call out others for not having his back; the other, an outrageous opportunist, in it for the "likes" and the website traffic, and, who is so self-involved that she really believes she has altruistic ideals. What is frightening is that they represent an increasingly pervasive attitude in today's culture. I mean this as a sincere compliment when I say that I hated them both by the time it was over - that's how excellent both are.

The lone holdovers from the original cast, Michael Park and Jennifer Laura Thompson as the grieving, virtually estranged parents struggling to survive, are so remarkably present after hundreds of performances. The ache they portray was felt throughout the entire theater. Park's "To Break in a Glove" (and the surrounding scene) was an emotional high point for me. I wept at his pain, and for my own pain at wishing I had ever had a moment like that with my own father. "Requiem" is also an emotionally devastating moment, made even more powerful by the heartbreaking performance of Mallory Bechtel, object of our hero's affection, sister of a suicide victim, and a daughter nearly lost in the shadow of her parents' guilt and anger. She found and provided an achingly detailed portrayal that was simply remarkable. With the news that all three will soon be departing the production, I feel so very fortunate to have seen them.

Taking over a Tony-winning role can't be an easy task, but Lisa Brescia did just that when she replaced Rachel Bay Jones as Heidi Hansen. Ms. Brescia is terrific, nailing the awkwardness of a mother who is coming to grips with the fact that despite making a lot of right choices is still somehow failing her son. Her anger and self-loathing are palpable, just as her fear and sadness are. Brescia is particularly wonderful in conveying her almost overwhelming love for her son. Brava! Taking over a Tony-nominated role also brings its own challenges, and frankly, as much as I enjoyed Mike Faist the first time around, Alex Boniello was even better. Brooding, a little frightening, and also vulnerable and even funny, Boniello easily became the focus of every scene he was in. Bravo!

So, now I'll admit the primary reason I hated and had pretty much written off Dear Evan Hansen. I loathed Ben Platt's performance, which was so overwrought, so affected, so one-note, it felt like an insult to every kid suffering from anxiety and is somewhere on the autism spectrum. I say this without irony or hyperbole: Andrew Barth Feldman gave one of the single finest performances I have ever witnessed. "Brilliant" doesn't come close to how I felt about his star turn as Even Hansen. It was just so honest and perfectly rendered. And so natural - I never once felt like he was acting or working himself up to any kind of emotional outburst. Instead, each tear he shed (and there were a lot of them) was so in the moment, I couldn't help but join him. He's not just a great actor for a teenager, he's a great actor period. There are no limits to what this young man can do. I for one, can't wait to watch his career take off.

Boy, am I thankful I gave this wonderful show a second chance.