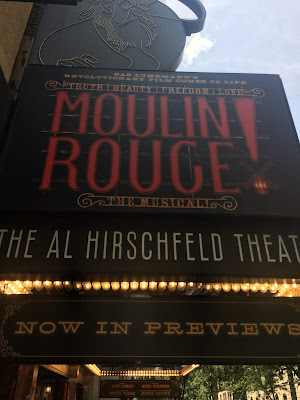 Not many things have changed at Moulin Rouge! since it first crossed my path a year ago. And that is mostly a good thing. It remains the new gold standard for jukebox musicals - and it just may be the most jukebox-iest of them all. It also fills the void left behind by Mamma Mia! (maybe it's the titular exclamation mark?). You see, this trip to the spectacular spectacular is the most fun you'll have on Broadway these days. And that is not anything to sneer at; it should be embraced in these dark, troubled times. The Broadway incarnation retains the eye-popping visuals, the bombastic, tongue-in-cheek singing, and the thrill-ride quality of the dancing from Boston. If anything, it has been ramped up a notch or two. 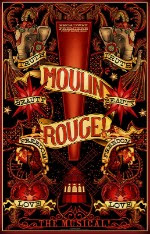 Still, there have been changes. Our heroine is sicker. Our slick narrator/emcee now leads a big number. There are fewer green faeries (as in only one left - a good thing). And the closing sequence has been tweaked to add the ensemble singing a heartfelt "Come What May," while a bare stage greets a somber exiting troupe (man, it is difficult to not give away too much...). I'm sure there have been a number of imperceptible edits that have cumulatively made the ending much more emotionally satisfying. That may also be due, in large part, to the palpable chemistry that now radiates off the stage at the Al Hirschfeld.

Then again, there was a big thing that needed changing that went untouched.  The villain of the piece goes off with no real consequences; he just kind of leaves the stage and that's that. No epic show down, no big defeat. Nothing. It doesn't make sense unless you think past the show and realize that he's now free to terrorize another woman. But Moulin Rouge! isn't that kind of show. Similarly, I think we are supposed to realize the aftermath of the villain's departure through implication. We know the company has banded together to uphold the Bohemian ideals - they literally tell us. But what has become of the club and its denizens is barely addressed. Had that somber exiting troupe been perhaps enhanced or given more depth, we could have ended on a truly emotional, devastating note. But Moulin Rouge! isn't that kind of show. Instead, we get a hedonistic mega-mix curtain call which leaves us with a completely different kind of emotional note. And that's fine, too, because Moulin Rouge! is that kind of show. And it wears its sexy, throbbing, heart on its sparkly sleeve.

Although this is the first musical of the season and it may sound premature to say so, I think Derek McLane's all-enveloping, red velvet valentine of a set, Justin Townsend's radiant, eye-popping lighting, and Catherine Zuber's opulent, erotic costumes are bound for awards glory. The same can be said for the near constant and always breathtaking dancing by acclaimed choreographer Sonya Tayeh, making an epic Broadway debut. Nearly every number is rightfully greeted with cheers of delight and lengthy applause. "Bad Romance/Toxic" and "Roxane" are particular stand outs, and of course there is the entire opening sequence from the slow-motion sword swallowing through the show's first shower of glitter. The dancing is truly spectacular.

The book by John Logan and lyrics used as dialogue serve the show well, mostly as a means to get us from song to song. I should mention that one big change I noticed since Boston is that the audience (at least the day I saw it) mostly reacted appropriately. As the barrage of clever lyrics as dialogue continued, they laughed when it was funny, but didn't go crazy at each revelation of a recognized song. This was particularly noticeable when "Firework" started - no laughs because it wasn't funny. It was touching, empowering and unabashedly fierce. All of this would be for naught if director Alex Timbers hadn't fully embraced the fun and the outrageous, which he did. He really is a master at making things build, bringing control to the chaos. 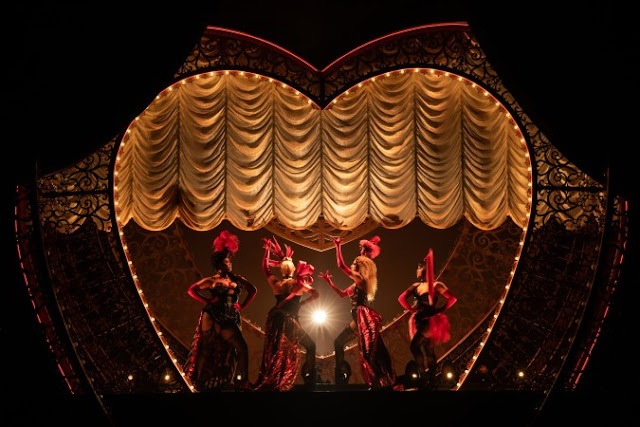 The ensemble must exhausted by the end of of each performance - I can't imagine doing it twice a day. They sure are talented singers, dancers, acrobats, gymnasts, contortionists, etc. It is nice to see such a diverse group, too, not just racially, but in gender and body type. At the Moulin Rouge, everyone is hot. The "Lady Marmalade" quartet - Robyn Hurder, Jacqueline B. Arnold, Holly James and Jeigh Madjus - is particularly dazzling to the delight of everyone in the room.

Ms. Hurder is more featured later as confidante and rabble-rouser, and is a magnificent dancer. At one point, she partners with Ricky Rojas, an equally amazing dancer, who does a lot with very little material. With more meat to his role, fellow Bohemian Sahr Ngaujah fares even better as Toulouse-Lautrec. He is by turns funny and intense, and his take on "Nature Boy" is soulful perfection. Despite my qualms with how his character's demise is given short shrift, Tam Mutu is pretty sensational as a creepy, dangerously evil man who would be up on charges today.

Though I didn't feel they lacked chemistry together or lacked individual charisma last summer, they certainly have developed even more now. "They," of course, are Aaron Tveit and Karen Olivo, as love-struck Christian and femme fatale Satine, joined together by a passionate desperation, albeit for different reasons. Mr. Tveit does double duty as narrator and leading man, and is much more at ease in a role that you can see he's starting to really enjoy - I imagine he'll be even better 6 months from now. It's a tough assignment, too, requiring him to run the gamut of emotions, belt out number after number, dance like Astaire, do stunts and physical comedy. And to look smoking hot while doing it. (I'm not objectifying here - several characters mention it.) Meanwhile, Ms. Olivo must command the stage as the star of the club, be vulnerable as her past comes back to haunt her, fight off a nasty man, save her friends, and battle a disease. Did I mention swinging in from the rafters and doing Beyoncé moves? She does it all with astonishing grace, humor and ferocity.

Danny Burstein practically steals the show as the Moulin Rouge owner and master of ceremonies. At once charming and vicious, his performance is simply exuberant. He nails "Chandeliere," and is having the time of his life. You can see the gleeful glint in his eye throughout, but never is it more apparent than when he comes out in the finale, daring us to beg for more spectacle with just a wink and a smile. His unabashed joy as he bellows "Everybody can can can!" is contagious.

You leave the Moulin Rouge in a cloud of confetti, spent and delirious. It isn't Sondheim, and it shouldn't be. But it sure is spectacular spectacular.