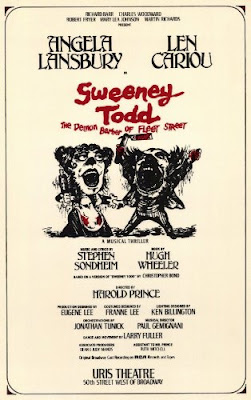 I have the Broadway Cares Flea Market to thank for this week's #TBT. It was there that I found one of my most treasured Playbills in my entire collection: the original Broadway cast Playbill for Sweeney Todd: The Demon Barber of Fleet Street. It is in nearly pristine condition and quite a bargain at $2!

Hard to imagine this is more than 40 years old, right? Time sure flies. This show was my first Sondheim, and it is one of my top five favorite musicals of all time. Unfortunately, I didn't get to see this production, though I did see the National Tour. Oh, how I would have loved to see my favorite actress, Angela Lansbury, in this role, not to mention the great Len Cariou.

So, why is this such a favorite of mine? Where do I start? The fun and terror of this musical thriller, complete with throat slashing, bloody corpses and the damned factory whistle. Then there's the brilliant juxtaposition of humor and tragedy, and how both can be pure evil. Of course, there's the absolutely brilliant score  - one that gets richer with each hearing. The smart, poetic lyrics and the heady mix of opera and musical comedy stylings...the lush orchestrations that illuminate the various motifs. I love the entire thing. 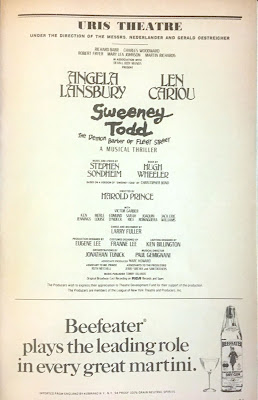 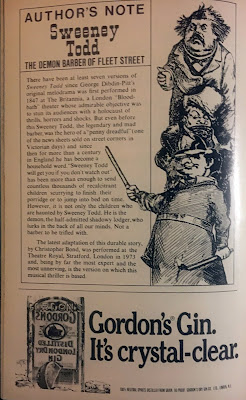 In looking over this four decades old booklet, I noticed the shocking number of ads for alcohol, luxury cars and airlines. So much for that popular belief that Broadway shows were for the masses - you can see who the advertisers were aiming at.

How thoughtful of Mr. Wheeler to include an author's note! 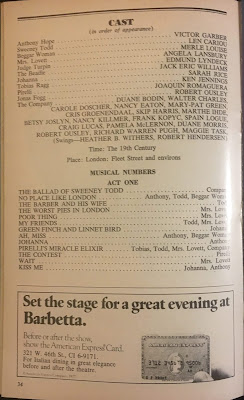 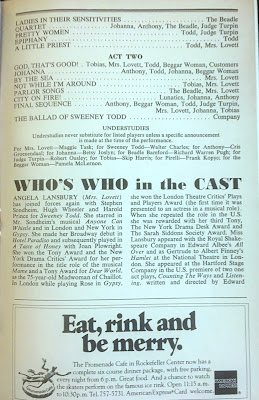 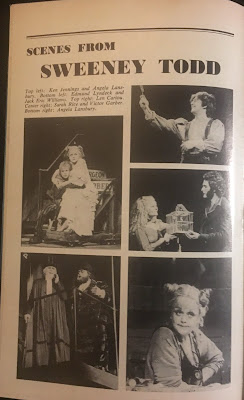 I always love when shows include production photos. I wish more shows did it today. 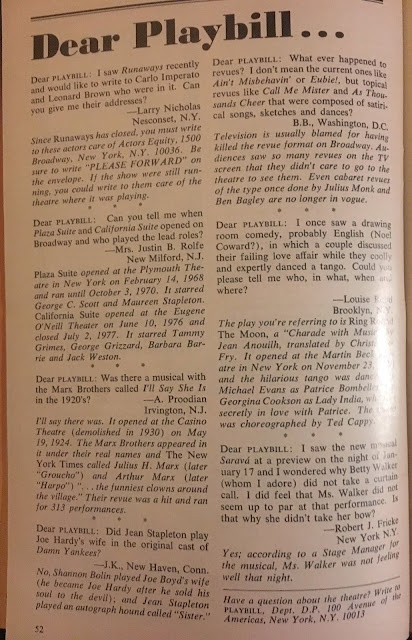 I'll let the above page speak for itself, except to say that the last question reminds me a lot of today's chat rooms. 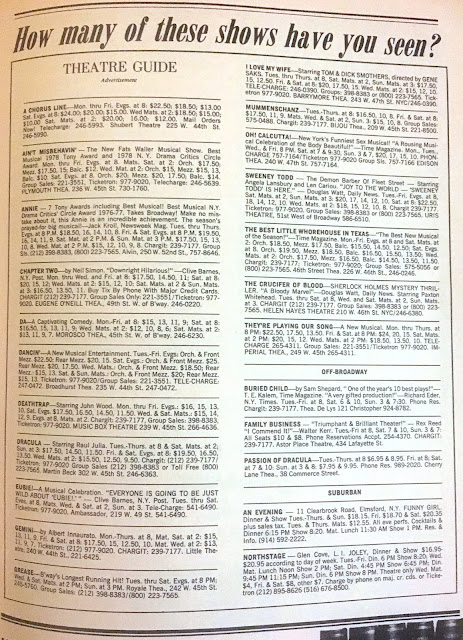 What a fascinating look back at Broadway history. Dancin' had the top ticker price of $25 for Saturday evening performance. A lot of shows had rear mezzanine seats for just over half the price of orchestra seats (take note, Moulin Rouge!). I wonder why Grease doesn't list prices...what are they hiding? 😐 Even more interesting, to me at least, are the names of the theaters: the Uris is now the Gershwin, the Little is now the Helen Hayes, the 46th Street is now the Richard Rodgers, the Plymouth is now the Schoenfeld, the Royale is now the Jacobs, the Martin Beck is now the Hirschfeld. And so many no longer exist: the original Helen Hayes, the Edison, the Bijou, the Morosco. And just look at those titles!