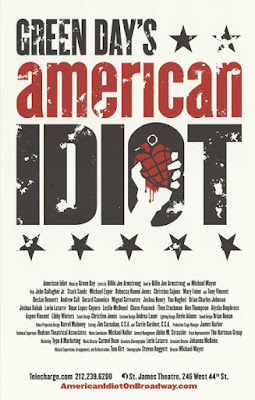 I'm pretty set in my ways. Anyone who really knows me will tell you that. But that doesn't mean my mind can't be changed - even when it comes to shows. Most recently, my mind was completely changed about Dear Evan Hansen, when, thanks to Andrew Barth Feldman's beautiful portrayal, I became a Fansen. It reminded me of a similar experience I had with American Idiot.

I was a blank slate when I entered the St. James for a preview. My familiarity with Green Day began and ended with "Good Riddance," though I don't think I could have told you they actually sang it. Mike, though, knew most, if not all of their work, and I figured he could fill in the blanks for me if necessary. Turns out his help wasn't really needed; I could understand it completely.

I didn't completely hate it. There were songs/sequences I thought were terrific - "Holiday," "Extraordinary Girl" and "21 Guns" stood out. And it turns out I knew a few more songs, though before that night, I had no idea who sang them.

By and large, though, I didn't think much of it. It felt too precise for a show with nonconformity as a theme. It was trying too hard to sell real rock music as legit on Broadway. And save for a very few cast members, I thought most of the company was overacting, self-indulgent and distracting. Pretentious was the word of the day, ironic, given its overt disdain for anything even remotely "establishment." I was pretty harsh in my assessment, and I still feel bad about that, because Mike was euphoric about what he had just seen, and I know I brought him down. Again, I'm sorry for that, Mike.


Still, after listening to Mike talk about it and understanding more about what I'd seen, I thought I'd give it another shot. I trust Mike, and if he said I missed something, I knew I had to try again. And so we went. And I really loved it. Maybe it was because I knew what I was getting into, I could relax more and let it wash over me. Maybe it was because I listened to more Green Day music before we returned. One thing I know for sure. With more performances under their belts, the cast was much looser, and they weren't pushing so hard.

We saw it again a few times and I got to know some of my favorite performers like Michael Esper, Stark Sands, Rebecca Naomi Jones, Joshua Henry and Mary Faber. (I was already a John Gallagher Jr. fan.) Not only that, but we drove all the way to Utica to see the very first performance of the first national our. And we traveled to Baltimore and Philadelphia, too. Mike even went to Raleigh, he's such a fan.

So the lesson is simple: keep your mind and heart open even especially when someone you trust says you should try it again. A show I almost wrote off became a favorite and got me to cities and theaters I never would have seen. Thanks, Mike!