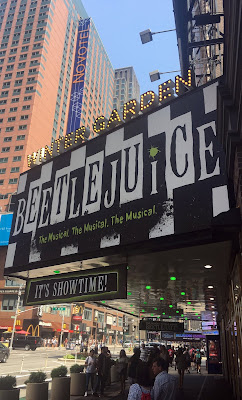 A couple of times during the show, Mike leaned in to me and whispered, "why is the audience screaming at everything?" It is true that literally (yes, I know what that means, and I am using it correctly) every single song was greeted with actual screams of approval, whether it was at the end of a giant production number, the end of each belt-your-face-off song (which accounts for every song), every joke (funny or not). Heck, they screamed at costumes, set pieces, and even a puppet that got the kind of ovation generally reserved the first performance of a newly-minted Tony Award winner. Hey, I love an enthusiastic audience, please don't misunderstand. But every reaction was at a level 10, with no where to go up; such uniformity of praise leads me to ask: did they mean it every single time, or was it what they thought was expected? To be fair, since Beetlejuice itself arrives at a level 10 and never modulates, so I guess the reaction was understandable. The result is that everything about the evening is exhausting on both sides of the footlights. 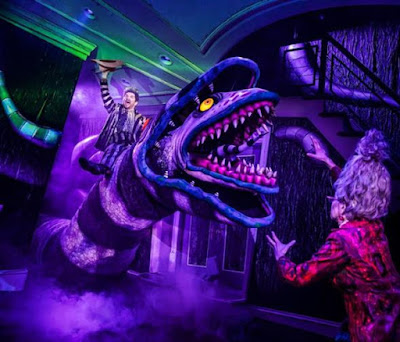 Perhaps I should preface this by saying I have never seen the film or any animated versions of this story, so I am coming at this from a truly judge-this-as-a-show only point of view. It would seem to me that the whole story revolves around Beetlejuice getting Lydia to say his name three times. That happens at the end of act one. For me, that's where it should have ended. Okay, maybe a a scene or two to tie up loose ends, but that's it. The show does not benefit from a second act. It slows down considerable, even though like act one, it is relentless in its intensity. By the time it was over - and you could tell how it was going to end well before it actually did - it was just too much of a good thing. Frankly, the whiff of desperation pervades a fair amount of act one and most of act two.  It felt like everyone involved was afraid that if they slowed it down, or stopped joking, or didn't reveal another special effect, that somehow we might lose interest or, worse yet, discover that there's not much there. What are they afraid of? Alex Timbers should know better, and is more than capable of finding ways to slow things down, trim the fat, and break the monotony.

The book (by Scott Brown and Anthony King) is overstuffed with plot as I mentioned. And there are so many unnecessary characters that take up time and drag things out. Did we really need that girl scout bit? One song, one scene and she's gone. Did we really need to meet the life coach's life coach? An offensive stereotype, and a half-assed sight gag weren't worth the time they took. And Miss Argentina? Another one and done moment that contributed nothing but another production number and a one scene joke. I'll assume from the screams of delight that these things are familiar and beloved from the film? Brown and King do provide many well-deserved laughs - I laughed a lot. It was crude, mildly offensive, and somehow, I mean that as a positive. It is the unrelenting, unmodulated tone of the whole thing that offers diminishing returns.

I could say the same thing about Eddie Perfect's score. When it is good, it is good - "The Whole Being Dead Thing," "Barbara 2,0," and "Home" are particular standouts. But every song is, you guessed it, at the same level and it's unwavering formula of production number/full-on belt/stuff it with a barrage of jokes in every song be comes tedious. And let's face it, you leave humming "Shake, Senora" and "Day-o," made sure by highlighting them (again) in the finale. What does that say about the original part of the score?

Now, here's where this review might take a surprising turn. Individually, I think most of the other elements are really very good. David Korins has created another great set, as expected, and manages to create an opulent, magical work space for the energetic cast to play in. Peter Nigrini's projections are creative, and Kenneth Posner's lighting is appropriately crazy (though the house lights pre-curtain and during intermission were annoying). Connor Gallagher makes a very respectable debut as a choreographer - seems he used his time with Beauty and the Beast to learn how to set dances around a fair amount of stage clutter - no small accomplishment given the excesses of the production.

The cast is terrific - it isn't their fault the show itself is messy. They are all on the same page and that's a great thing. Despite what I said above, the actors who play the girl scout, the life coach's life coach, and Miss Argentina are all good (Dana Steingold, Kelvin Moon Loh, and Leslie Kritzer, respectively). Ms. Kritzer plays a much more significant role as the life coach for a grieving family, and she is a riot, nimbly walking that line between perfect comedy and ridiculousness. As the not-so-grieving widower, Adam Dannheisser is fine, and is actually the bright spot of the second half.

Two of my favorite actors on Broadway, Rob McClure and Kerry Butler, were, as usual, terrific, with ample opportunities for broad physical comedy and brassy Broadway singing. The real stars of the show, naturally, the earthbound brooding goth girl who partners with the titular ghost to gain her access to her deceased mother and him to gain his one true desire to be seen. These roles couldn't be better cast. Sophia Anne Caruso owns the stage and has a huge voice, both perfect for this staging. It is to her credit that she can hold her own (and even dominate) the force of nature that is Alex Brightman, who works the audience like a carnival barker, and looks to be having a most excellent time. His line delivery is impeccable, and the voice he affects only adds to the fun. With both School of Rock and now Beetlejuice calling on him to pull from the same bag of tricks, I'd love to see him tackle something with a little more emotional depth and a lot less bombast. I'm sure he's up to it.

Seeing this show reminds me of something my grandmother used to say around Halloween. It was something about not eating all of my candy at once. It could make me sick, but it definitely will stop being a treat after the fourth or fifth piece. Sugar rush...empty calories...