"Hit Songs" From Broadway Misfires: Spider-Man: Turn Off the Dark

"Hit Songs" From Broadway Misfires:
Spider-Man: Turn Off the Dark 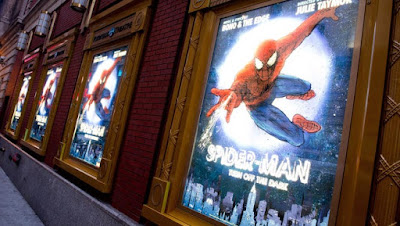 Despite an impressive, if troubled, run of 1,066 performances, Spider-Man: Turn Off the Dark was a Broadway misfire. Maybe the biggest of them all. It really was a fascinating thing, and it wasn't all bad. The stunts were spectacular, and so was the design.
And though the book and score were a mess, both had their moments. One of those, a rare moment of calm and emotional depth, is the subject of this month's "hit song." One would think that under the pen of Bono and The Edge, masters of their art, the whole score would have been better. This song was a stand out, and really should have been a hit outside the walls of the Foxwoods Theatre. 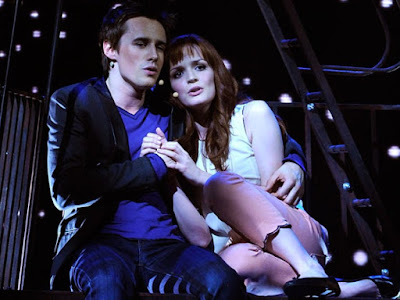 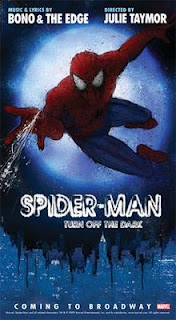 "If the World Should End" from Spider-Man: Turn Off the Dark
Music and Lyrics by Bono and The Edge
Sung by Mary Jane Watson (Jennifer Damiano)
Favorite Lyrics:
You are all I needAnd all I can defendAll I need to hold on toIf the world should end
I can see the you
Under your second skinI can feel your heartbeat quickenQuicken and then slowThere's nothing else I need to knowAnd there's nothingYou need to pretendIf the world should endThe
Why This Should Be a "Hit Song": The tune is both haunting and romantic, with an undercurrent of impending doom; in short, it is a musical metaphor for this specific moment in the show. At first glance, the lyrics no doubt seem too simple. True, it's not Sondheim, bur for a show about a comic book super hero, it works. Consider that the song is sung by a teenager in love and facing death at the hands of a super villain. Waxing poetic isn't what's going through her mind. That said, there is some decent imagery throughout.
Do you have a favorite song from a Broadway flop? Let us know! Maybe you can be a guest writer!
#2555
Posted by JK at 7:00 AM