Broadway in a Box CD Review: Anything Goes 1987 Cast Recording

Broadway in a Box CD Review:
Anything Goes (1987)
At Christmas a few years ago, Jeff gave me a copy of Broadway in a Box: The Essential Broadway Musicals Collection. He has now given me the opportunity to use his blog to share my impressions of each of the 25 cast recordings contained in the set, in alphabetical order.
This week’s entry is about the 1987 Broadway Revival Cast Recording of Anything Goes. 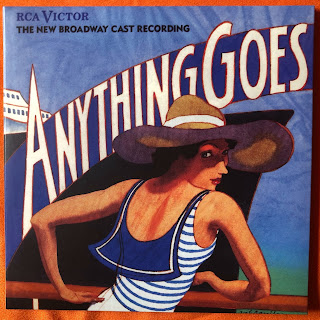 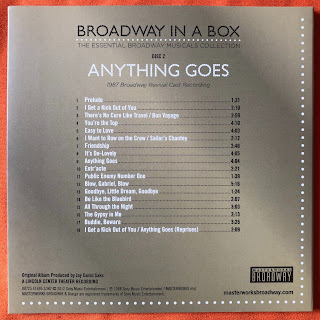 I should admit at the outset that this show is not among my favorites, either in terms of music or story. While I did not see the production recorded on this CD - which Jeff assures me I would have enjoyed - I was completely underwhelmed by the more recent Tony-winning revival. Since many other people loved that one, I can only conclude that the show is just not my cup of tea.
Nonetheless, this CD had a number of truly enjoyable moments for me - in particular the exciting orchestral preludes and dance breaks spread liberally throughout the score. Even without the benefit of the visual spectacle that I’m sure accompanied them on stage, the music came across as vivid and exciting on the recording. 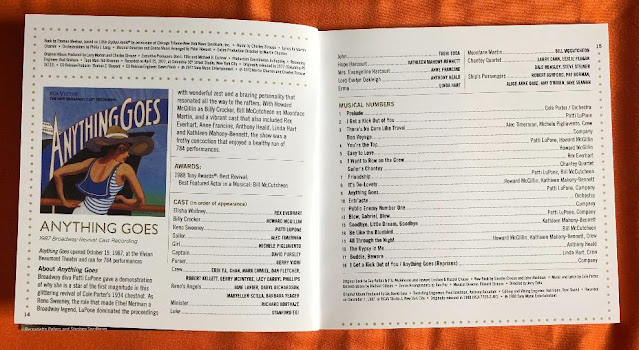 Likewise, most of the performances were excellent, particularly the venerable voice of Howard McGillin as Billy Crocker, as well as his frequent singing partner Kathleen Mahoney-Bennett as Hope Harcourt. They sounded great together in songs like “It’s De-Lovely” and “All Through The Night,” adding a dose of much-needed sweetness among all of the silliness of this show.
I’ve been a huge fan of Patti LuPone since I first listened to my library copy of Evita when I was 15 years old. I loved her delicious performance in the underrated Women on the Verge of a Nervous Breakdown and in numerous other recordings, films, and TV shows; I even prefer her London recording of Sunset Boulevard. That being said - specifically in terms of listening to a recording of these songs - I don’t think she is a great fit for this material. Her sudden dynamic shifts and exaggerated vowels work for most of the characters she’s played, but they’re exactly what you don’t need for songs which frequently feature rapid-fire wordplay. At best, it’s a distraction from the material; at worst, as in “Blow, Gabriel, Blow,” she renders the lyrics indecipherable. Of course, I am certain that she was thrilling on stage, and I can’t wait to see her in Company.
Next up is the Original Broadway Cast Recording of Cabaret.
Thanks, Mike! Looking forward to next week already. Jeff
#2596
Posted by JK at 7:00 AM