This week’s entry is about the 1966 Original Broadway Cast Recording of Cabaret. 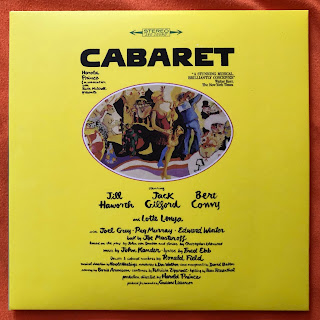 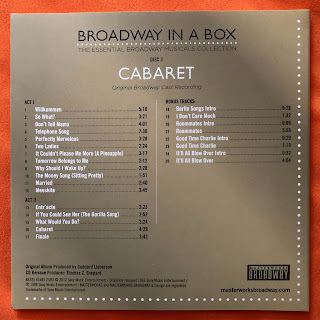 This CD is a nearly flawless representation of the original version of this show, with vivid performances all around. Two weeks ago, when I wrote about Annie, I noted that some of the performances seemed to sacrifice characterization for clean recordings of the songs; that’s not a problem here, where almost every performer brings both technical prowess and a keen sense of character. No two of the lead performers sound at all alike, but pretty much all of them are excellent.

Of course, that’s not surprising given how stacked this cast is with talent. One of the standouts is Jill Hayworth as Sally Bowles, with a powerful voice that makes it easy to believe she could talk anyone into giving her free lodging. Likewise, the legendary Lotte Lenya as Fraulein Schneider is a perfect combination of determination, practicality, and vulnerability, all of which come together beautifully in “What Would You Do?” Little need be said about Joel Grey’s career-making performance here, other than it absolutely lives up to the hype.

If I have any tiny qualms about the singing on this CD, I would say that Burt Convy as Cliff Bradshaw comes off as a bit overblown and quasi-operatic at times, as if making up for his relative lack of sung material. It’s perfectly appropriate for the character but a little out of sync with his scene partners. Another ever-so-slight distraction is Jack Gilford as Herr Schultz, who provides a memorable interpretation of his character but does not even attempt to sing in key. But these are indeed minor issues; the entire cast, including the ensemble, sounds amazing, as in the chillingly beautiful “Tomorrow Belongs To Me.” 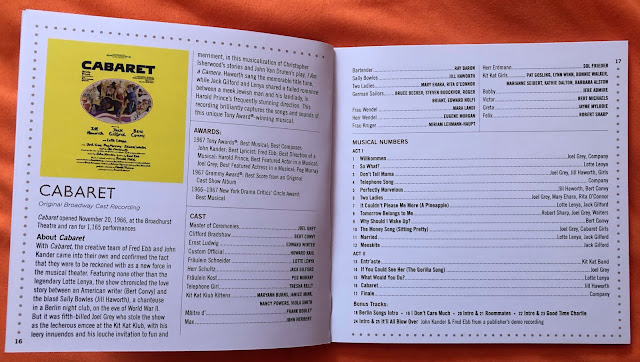 Despite being a recognized masterpiece, Cabaret has also always managed to be a work in progress, with major changes for the film version and Broadway revivals. Some of the songs on this CD therefore do not survive in current versions of the show. One is “The Money Song (Sitting Pretty),” which was replaced by a superior song on the same topic and is probably not missed by many people. Another, “Why Should I Wake Up,” is a gorgeous ballad which gives Cliff some decent singing material, but which is entirely unnecessary to the plot and I can understand why it’s no longer in the score.

I have a sentimental attachment to “Meeskite,” having sung this song when I played Herr Schultz at Fordham University in 1994; without it, the character seems a little out of balance with his partner Fraulein Schneider. At least in the version we performed, it also serves the dramatic purpose of alerting the Nazi Ernst Ludwig to the plans of the older pair to marry. However, it’s my understanding that the song was generally disliked from the get-go, and listening to it today, I have to admit it hasn’t really stood the test of time, so I’ll bid it a bittersweet farewell.

The CD contains a significant amount of bonus material from an early version of the show produced as a demo for John Kander and Fred Ebb’s publisher. It includes spoken narration and four songs, none of which made it into the show in its original form, but one of which (“I Don’t Care Much”) eventually worked its way into the score in a modified form. It’s interesting to hear the creators discuss their vision for the show in their own words, but the other songs themselves are not particularly interesting. The somewhat long, somewhat dreary “Roommates,” for instance, was replaced with the much catchier, and more concise, “Perfectly Marvelous.”

Next up is the Original Broadway Cast Recording of Camelot.