Broadway in the Age of COVID 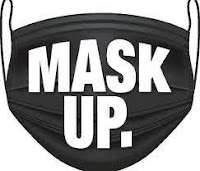 I was going to post my review of Company today, but in light of the current rash of performance cancellations, I thought perhaps talking about our experience with Broadway during a pandemic might be more pertinent. This is not any sort of political editorial, but rather an account of our experiences.
If you follow us on Twitter, you know we have been so excited for our whirlwind weekend in New York after nearly two years. We were fully prepared - full vax + booster, faithful adherence to mask use at all times, and enough hand washing to rub our knuckles raw. And we've been following the Broadway news to keep up with any and all changes, too. Even with all of that, we were fully prepared for whatever came our way.
And we had a little bit of everything.
Let me preface all of this by saying that regardless of how you might feel about the mandates and policies, the people charged with enforcing them are heroes. The crap they must have to put up with is probably off the charts. Over the weekend, we met so many of these people: the outside people who checked our IDs and proof of vaccination were kind, patient and very friendly every single time. The ushers who seemed genuinely excited to see us. My favorite was the lady at Company who sheepishly asked me to hold my ticket a little closer - "We aren't supposed to touch anything!" And when I asked for an extra Playbill, she winked and handed me a small stack! Again, they were all wonderful. 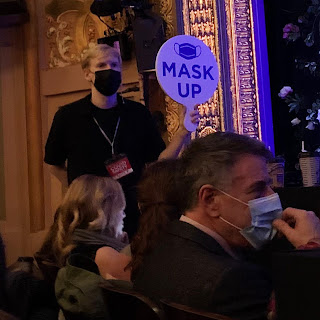 Then there were the house monitors, masked, badges prominently displayed, and large "mask up!" paddles. At Six there was a particularly stubborn older gentleman who took every chance he could to take his mask off. It was interesting to watch the monitor deal with it. First time: "Please make sure you have your mask on at all times." Second time: "Don't forget! It must be over your nose and under your chin until you are outside after the show." Third time: a silent wag of the finger, a mask up hand motion, and that firm, I-mean-business-there-won't-be-another-chance stink eye that is generally employed by the most effective elementary school teachers. He was fully masked from that moment on. You know, he was literally the only person we saw that wasn't 100% compliant at any of the five shows we saw.
Unfortunately, we had one less than spectacular experience. At Studio 54, prior to Caroline, or Change, one of the COVID staff was on a major power trip. There we all were waiting for the show to start, and this piercing voice rang out with an imperious tone telling us the "the rules," which included the usual, plus a "zero tolerance" prohibition of any food or drink anywhere in the theater. The speech ended with this: "Consider this your ONE warning. You will be asked to leave if these guidelines are not followed." The tone... the volume...
Fast-forward to intermission. As people milled around in front of us (we were in the first row of the rear mezzanine and the wide aisle was directly in front), occasionally a nose peeked out, and once someone's mask fell as they were adjusting it. In each case, one of the staff discreetly reminded "mask up!" and even offered the guy who dropped his mask a new one! Then, directly in front of us, the little emperor unleashed a very rude, piercing tirade aimed at someone who tried to sneak a sip of water under their mask. It wasn't just the volume or the tone, but the words spoken. He was demeaning and condescending. For the first time in 38 plus years of attending Broadway shows, I was compelled to write a letter of complaint. Still haven't heard back from Roundabout...
On the other end of the spectrum, we also had a chance to deal with the person who probably has the most difficult job of all, and yet had the kindest, most sympathetic way about her. As we approached the Stephen Sondheim Theatre and were paused so I could get a photo of the marquee, a COVID team worker walked up and asked if we were there for the Mrs. Doubtfire matinee. She explained that due to a breakthrough case in the company, the show was cancelled, and the refund was probably already processed. She seemed genuinely disappointed for us and suggested that there was plenty of time to check out TKTS for another show. And that's just what we did! SIDE NOTE: Not only was our refund processed, there was a receipt in my email, and it was in there almost to the minute of our arrival!)
As Mike said, "Looks like this is what going to Broadway in 2021 will be for awhile." Thanks to almost everyone tasked with dealing with it, being back to Broadway isn't really that bad at all.
Posted by JK at 7:00 AM