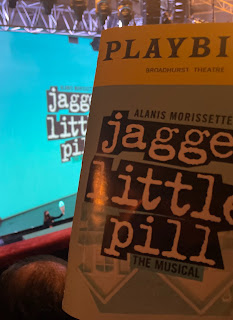 Review of the Sunday, December 12, 2021 matinee performance at the Broadhurst Theatre in New York City. Starring Heidi Blickenstaff, Morgan Dudley, Kathryn Gallagher, Derek Klena, Sean Allan Krill, Lauren Patten, Adi Roy. Book by Diablo Cody. Music by Alanis Morissette and Glen Ballard. Lyrics by Alanis Morissette. Scenic design by Riccardo Hernandez. Video projection design by Lucy Mackinnon. Costume design by Emily Rebholz. Lighting design by Justin Townsend. Sound design by Jonathan Deans. Movement direction and choreography by Sidi Larbi Cherkaoul. Direction by Diane Paulus. Production closed December 17, 2021. Grade: A+
As chance would have it, we caught Jagged Little Pill because of COVID over at Mrs. Doubtfire. Turns out, I'm so very glad we had the opportunity. Now I wonder if the company knew that they were one outbreak away from permanent closure. Whether they did or not, they - from lead to ensemble member - gave a beautiful performance, passionate and bold. 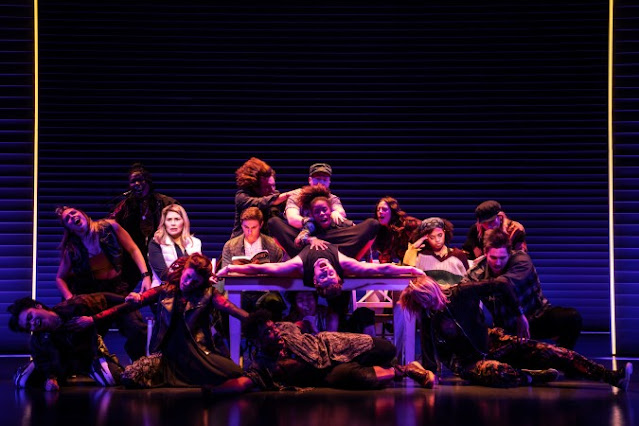 Before I begin, let me say that I fully stand by my first visit review (HERE). Instead, let's talk about the new cast members and a few observations about the evening. 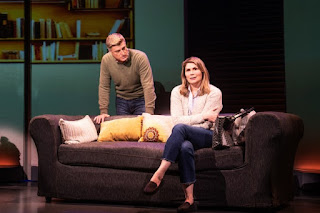 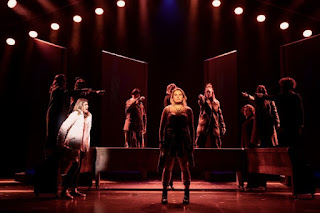 First, the remaining original principal cast members remain excellent, with Sean Allan Krill digging deeper emotionally throughout.You could feel his frustration, resignation, despair and relief all the way up in the mezzanine. It is also worth noting that Derek Klena, in a somewhat underwritten role, has also found new opportunities to make his presence felt. Tony-winner Lauren Patten has wisely not indulged in any means to push her role or show boat. ("You Oughta Know" remains a crowd-pleasing and emotional highlight.) But if I were to give a "Most Improved" award to anyone, it would have to go to Kathryn Gallagher, who needed no improvement to begin with, but still managed to reach my heart in such a powerful way. Both "Predator" and "No" are shocks to the system and cathartic all at once. She's a fan favorite for good reason. 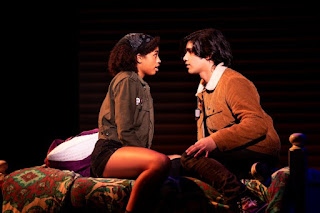 The new cast members, including several new ensemblists, fit into the show perfectly. Adi Roy is charming as Phoenix, making it easy to see why Frankie is both conflicted by and instantly in love with him. Morgan Dudley is a fine Frankie, though not as powerful a singer as her predecessor. Yet, somehow, she makes a more believable sixteen year old, and her chemistry with both Roy and Patten is palpable.
In the central role of Mary Jane Healy, Heidi Blickenstaff is a true revelation, and in a different circumstance would certainly re-open the discussion of a Best Replacement Tony Award. Do not read this as slight in any way to Elizabeth Stanley, also revelatory in ways that her successor isn't. What Ms. Blickenstaff delivers is a fierce and raw performance - a valiant, angry fight against all the things of which her Mary Jane is painfully aware. Number after number, she ignites each song she sings, creating what are essentially fiery arias. There is self-loathing in everything she does - right up to her tour-de-force "Uninvited," as Mary Jane hits rock bottom. Hers is the Broadway performance of the year for me. 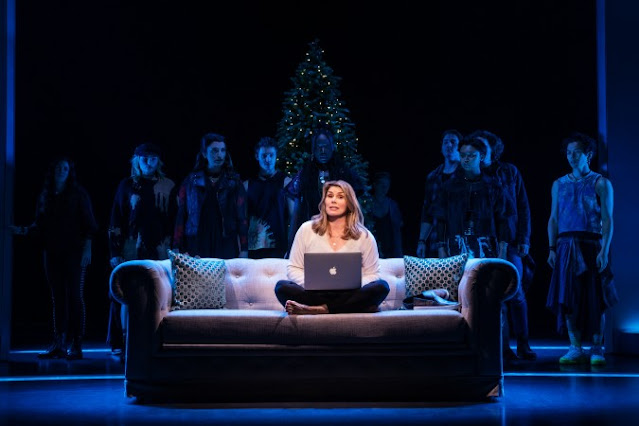 Jagged Little Pill has its detractors, who, on social media at least, are taking no small amount of pleasure in its abrupt demise. Shame on you if you are among them, if for no other reason than a lack of compassion for those whose positive COVID results brought the show down and the dozens of people who have lost their jobs just before Christmas. No show can be all things to all people, but maybe celebrate all of the really big representation that IS in the show - there is no shortage of hot button issues in the script. By all means, be disappointed if you don't see yourself in the show. You aren't wrong to be. But vitriol and blatant hatred doesn't help get your point across, especially when you aim it at those who were just doing their jobs.
📸: J. Kyler, M. Murphy
Posted by JK at 8:30 PM