This week’s entry is about the 1964 Original Broadway Cast Recording of Hello, Dolly!

Before I listened to this recording of the classic Jerry Herman musical, I had two main concerns. First, the material itself is not really my cup of tea. The songs are a bit too old-fashioned for my taste, and the dramatic stakes are not very high. Second, I wasn’t quite sure how I felt about Carol Channing (in the title role of Dolly Levi) as a performer. I haven’t had that much previous exposure to her work, but from what I’ve seen and heard, she can sometimes be a rather strong cup of coffee, if not a bit scary. 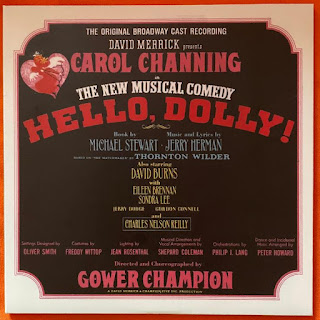 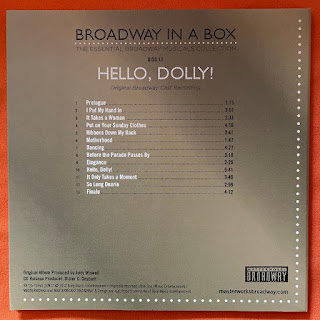 I’m happy to report that these two factors more or less neutralized each other in this recording, with Channing’s highly eccentric vocals often making up for songs that I otherwise would have trouble connecting with. (In the most recent revival, Bette Midler also made them interesting, but of course using an entirely different skill set.) If I find some of the songs flat and predictable - a mere matter of personal taste, as I know songs like “I Put My Hand in There” and the title song are, objectively, classics of American musical theater - Channing’s delivery is just the opposite of that: dynamic and wild. From her gravelly sing-speech, to her low-pitched growling, to something approaching normal singing in her higher registers, her unique style made her songs genuinely fun to listen to.

In the other major roles, David Burns is in beautiful voice as the earnest love-seeker Horace Vandergelder; his “It Takes a Woman” is very satisfying, even if his vocals come off as a little stilted in comparison to some of the other singers surrounding him in the show. These include not only Channing, but also Charles Nelson Reilly (Cornelius Hackl) and Jerry Dodge (Barnaby Tucker), who appropriately ham it up as Horace’s more frivolous colleagues. 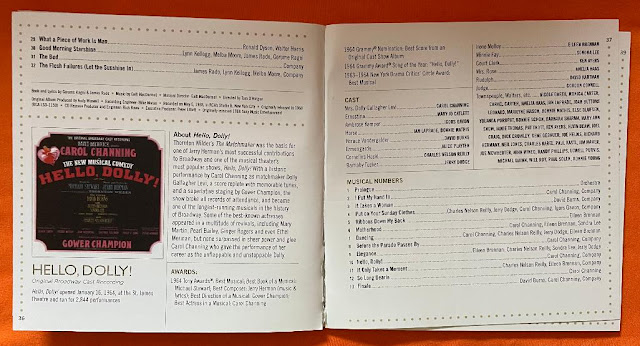 By far my favorite performer on this recording, though, is Eileen Brennan as Irene Malloy. I was previously only familiar with her roles in broadly comedic movies like Private Benjamin and Clue, so I was genuinely surprised to discover her abilities as a sweet lyric soprano. I don’t know if Herman had her in mind when he wrote this part, but her gorgeous aria, “Ribbons Down My Back,” and her portions of other songs like “Motherhood,” seem perfectly attuned to her skills as singer and (vocal) actor. The show seems to become something else - something, at the risk of beating a dead horse, more to my somewhat operatic taste - when she is part of the scene.

Finally, I’d like to register two small qualms about the CD itself. First, I found the balance a bit off, with the vocals often drowning out the beautiful orchestra. Second, this is a very short recording from the standpoint of a post-CD-era listener, containing just the core songs of the show. I realize this is an artifact of the necessity to fit a 1964 cast recording onto one LP record, but other CDs in this series have made up for that by including bonus material, and this one does not. Despite these small matters, I thought this recording really put on its Sunday clothes and helped me enjoy this score about as much as I ever could.

Next up is the Original Broadway Cast Recording of How to Succeed in Business Without Really Trying.

Thanks, Mike! Looking forward to next week - How to Succeed... is one of my favorites! Jeff