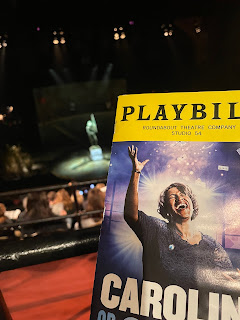 Review of the Saturday, December 11, 2021 evening performance at Studio 54 in New York City. Starring Sharon D. Clarke, Gabriel Amoroso, Caissie Levy, Tamika Lawrence, Samantha Williams, Kevin S. McAllister, Rheaume Crenshaw, Arica Jackson and Chip Zien. Book and lyrics by Tony Kushner. Music by Jeanine Tesori. Scenic and costume design by Fly Davis. Lighting design by Jack Knowles. Sound design by Paul Arditti. Choreography by Ann Yee. Direction by Michael Longhurst. Limited engagement ends January 9, 2022. Grade: C+
I'm willing to concede that I came into the Roundabout revival of Caroline, or Change pretty unprepared. Knowing the depth that Tony Kushner brings to everything he does - even the title does some heavy lifting - I really should have done my homework. In my defense, I really wanted to go in with a clean slate (I didn't see the original, and had not heard the score). That said, based on this production, Caroline is one of those shows I appreciate but not love. I'm not sure I even liked it, but I haven't stopped thinking about it since the final curtain.
The book (by Kushner) and score (by Jeanine Tesori), set up as a series of mini-operas, demands you sit up and pay attention to every note and syllable. Generally, this is a plus in my book - I love shows that you have to actively participate in. But there were times that it felt rather plodding, and my mind wandered. That is never a good sign. Only a few times did the tone of the piece change significantly enough to register. The end result for me was this: what was good was great, excellent even; everything else was, well, dull.
It didn't help that the direction (Michael Longhurst) was just as plodding and unimaginative, especially disconcerting given the built in theatricality of the anthropomorphism of the significant objects in Caroline's miserable life. He also gets rather heavy-handed: I actually giggled when the set split apart, letting us know that there was a rift between parents and child, and I giggled again when it came back together obviously after the reconciliation. (Glad I had my mask on...) Ann Yee's choreography adds a little zip to things, but ultimately there's more Dreamgirls dancing here than there is in Dreamgirls, and that gets tedious after two and a half hours. 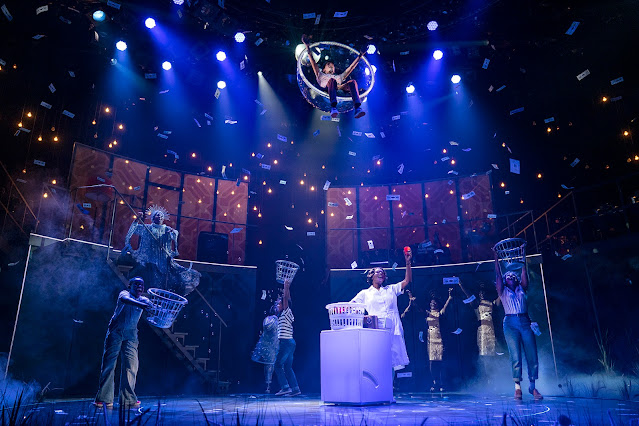 The set design by Fly Davis, is mostly a detriment to the production, looking flimsy and uninteresting. Then, of course, it naturally pales in comparison to the magnificence of the set for Hadestown, which Davis has virtually replicated, right down to the donut turntable, the splitting in the middle and the upper platforms. (Rachel Hauck may want to look into a lawyer.) Davis' costume design is just as obvious and cheap looking. Clearly, there was a sale on blue sequinned material when the radio's final costumes were created. Only Jack Knowles seemed to understand the assignment - his angry lighting and use of darkness was superlative and did more to convey mood and theme that the rest of the creative team combined. Truth be told, this show might just work better given the Chicago treatment.
Fortunately, many of the performances really elevated the evening, but again, what is good is great, the rest, not so much. Despite some mighty fine clarinet playing by John Cariani, his talents were completely wasted here. He barely registered, which isn't really his fault - the part feels like filler. The same could be said for the grandparents, played by Joy Hermalyn and Stuart Zagnit, who (I guess) are meant to be both comic relief and social commentators. There had to be a way to present them in a more impactful way. 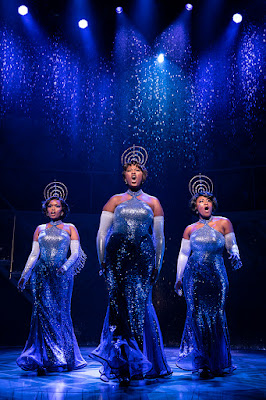 Arica Jackson did fine vocal work as the moon, but as presented, it isn't the brilliant symbol this production wants it to be. Equally fine vocal work by Rheaume Crenshaw brought the washer to bubbly life (literally and figuratively), and Nasia Thomas, Nya and Harper Miles did everything they could with the part of the radio - they sure did a lot of walking, too! Of the objects, though, the real standout was Kevin S. McAllister, who does double duty as both the devilishly sinister dryer and the tired, belabored bus. His voice and his presence immediately made you feel a sense of danger (dryer), and the burden of society (bus). Every time he was onstage, he was who I wanted to watch.
One of my all-time favorite actors, Chip Zien, provided the jolt of dramatic energy the show needed when he arrived in act two, particularly when he uncomfortably faced off against Caroline's daughter, a civil rights activist. I wanted to cheer when Zien said something to the effect of, "don't make her go. She's the most interesting thing that has happened since I got here." Truer words... And that actor, Samantha Williams, who I loved in Dear Evan Hansen pre-shutdown, is absolutely brilliant here, a strong presence always, but always wringing every nuance out of each moment she has. Cast her again and soon! Also terrific is the knowing performance of Tamika Lawrence as Caroline's progressive friend, Dottie. 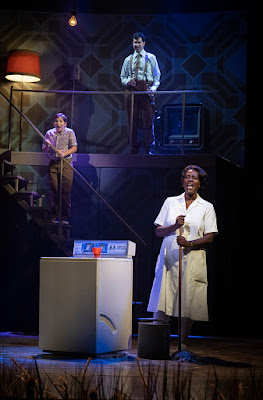 Gabriel Amoroso does impressive dramatic work as the mourning Noah. His is the character that has the most area to cover, and this young man handles the job with real finesse. As his chronically people-pleasing step-mother, Caissie Levy does her usual exceptional work. Her carefully plotted character arc allows us to be simultaneously annoyed by her and squarely in her corner. When she finally reaches her breaking point, her moment is cathartic for character, actress and audience alike.
Finally, there's Sharon D. Clarke in the title role who has kept me thinking about this show. While I can certainly appreciate the yeoman's work she put in here, I'm not as bowled over by her performance as others - I did not join in the as expected standing ovation. Her big aria (that's really what "Lot's Wife" is) felt flat and never felt like the explosive revelation it is intended to be. Her voice is strong, to be sure, but in a song and moment clearly meant to stir emotions, you really need to sell it. A long-held note and an up-option doesn't always give a big payoff. On the other hand, given the embedded choice of the title, where you are either going to change or be Caroline, Ms. Clarke certainly handles that unenviable task well. I don't think I've ever witnessed a more obstinate, unflinching performance. In her refusal to move on and progress, Caroline stands to lose everything - job, family, her soul. Clarke is a captivating actor, and I'll bet she's in the running for a Tony. I wish I was more impressed.
📸: J. Kyler, J. Marcus
Posted by JK at 7:00 AM