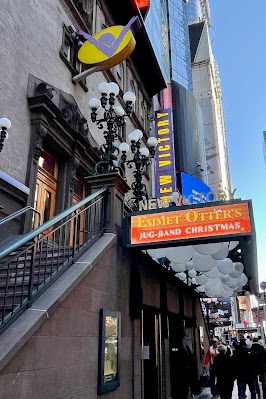 I grew up watching the Jim Henson Muppet Christmas special Emmet Otter’s Jug Band Christmas pretty much every Christmas Eve for many years. It was a beloved tradition that I was thrilled to renew with my closest friends when it was released on DVD several years ago. Given my love of the story and its songs, I knew that I was certain to enjoy the new live-action show at the New Victory Theater, but I also knew that it would be difficult to match my experiences with the original television special. I’m happy to say that New Victory’s version, under Christopher Gatelli’s loving, creative, and fast-paced direction, is not only just as delightful as the original, but enhances and expands on the experience in unexpected ways.

The design elements closely match those seen in the TV special, but build on them in some important respects, and of course are rendered more magical by seeing them live and in person. John Tartaglia, who has some experience with putting puppets on stage with Avenue Q, serves as Puppet Director here, and he fills the stage with an amusing menagerie provided by Jim Henson’s Creature Shop; as in the original, Ma and Emmet Otter have many furry and feathered friends to greet as they paddle down the river. All of the main characters are usually portrayed by actors in elaborate costumes (designed by Gregg Barnes and again provided by Jim Henson’s Creature Shop), but sometimes are also portrayed by look-alike puppets. This contrast is often used to fun effect, as when puppet versions of Ma and Emmet are seen going down their slide upstage, with the live versions sliding joyfully into view downstage. The music is pre-recorded but, in the hands of Music Director Larry Presgrove and orchestrator Dan Delange, sounds better than ever. 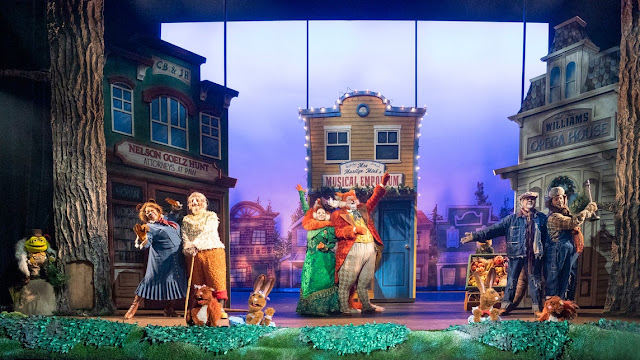 The simple but effective set design, by Anna Louizos, makes good use of the small stage by dividing it into several zones. The center part of the stage (depth-wise) is where the main scenes take place, with human actors and pleasantly stylized set pieces (look for some subtle nods to several people associated with this show and the Muppets in general). In front of and behind that area are two “trenches” that allow the puppeteers to introduce their creatures while remaining mostly unseen. This layered design allows for human actors and puppets to interact throughout the show, and also for some larger-scale crowd scenes when the citizens of Watertown fill the stage. 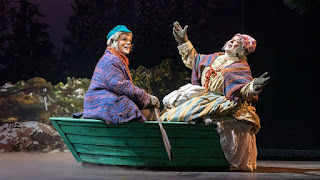 The acting is uniformly excellent. The crucial central roles of Alice (Ma) Otter and her son Emmet belong, respectively, to a familiar Broadway veteran and a talented New York newbie. The veteran is Cass Morgan, who captures all of the compassion, humor, and vague sadness that’s part of this character’s history, and who sings like an angel. The newbie is Colin Trudell, who makes Emmet as lovable as ever with his eager and youthful energy and a very assured singing voice. (I think it’s a good choice for him to use his natural voice rather than try to do an imitation of the television Emmet.) The two of them are terrific separately and ooze familial chemistry when they are together, as they often are. 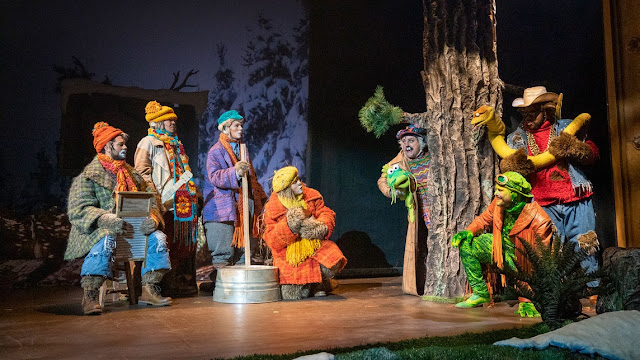 I also struggle to find a weak link among the supporting cast, who - and this is pure praise - mostly do an amazing job simulating the performances of the Muppet legends who created the original characters. I’ll single out a few standouts here. Jordan Brownlee, with his impressively deep voice, does double duty as one of Waterville’s most noble characters (Doc Bullfrog) and one of River Bottom’s most dastardly (Chuck the Stoat, who roars out a terrifying “River Bottom Nightmare Band”). Kevin Covert is hilarious and appropriately imperious in the expanded role of Mayor Fox. Steven Huynh is delightful as Emmet’s best friend Wendell, still adorably dim-witted and hungry for mashed potatoes. Most impressively, LaVon Fisher-Wilson, as Mrs. Mink, steals the show at the talent contest with her bluesy G-rated striptease, “Born in a Trunk” (Mayor Fox cuts her off before things go too far!). Fisher actually does triple-duty in the musical, playing another role in the talent contest as well as the role of Ma Otter’s compassionate best friend, Hetty Muskrat.

As for the show itself, most of the songs (by Paul Williams) and dialogue (book by Timothy Allen McDonald and Christopher Gatelli) will be familiar to those who have seen the original TV special. There are, however, some entertaining (and moving) additions. I’m often skeptical of expanding on existing properties, but in this case the additions add significantly to the story and only modestly to the running time. Four full songs are added to the score: “Waterville,” which gives Mayor Fox the opportunity to introduce us to his town; “Trust That Branch,” wherein a quartet of squirrels help give Emmet the courage to poke a hole in the washtub; “Alice Keep Dreaming,” in which the ghost of Pa Otter encourages his widow to do just that; and “Born in a Trunk,” Mrs. Mink’s mildly racy talent contest number, mentioned above. The talent show is also filled out with a brief aria from Beverly Badger (actually a conniving Mrs. Fox), an acrobatic squirrel performance, and a pair of manic dancing rabbits (also listen for some local shout-outs during the talent show). Those squirrels also figure in a particularly hilarious running gag, as they excitedly grow their own Christmas tree.

Needless to say, I recommend this production to everyone, young and old. If you’ve seen the TV special, you will savor the familiar and eat up the new elements. If you haven’t seen it, you’re in for a treat, and you can rest assured that it will be an easy story to follow, even for young kids. This is the first production I’ve gotten to see at the New Victory, but it certainly won’t be the last.