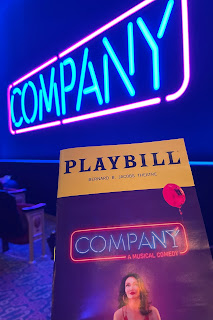 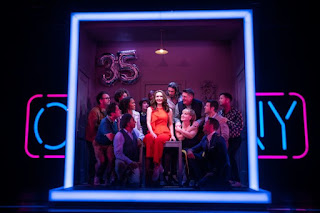 I definitely didn't have Patti LuPone wears a red feathered nightie and uses the toilet on my 2021 Broadway Bingo card. And yet I have witnessed just such a thing. It happens in the surreal and mad-cap number "Tick Tock" in the current revival of Company. As nonsensical as that sounds, it works wonders; the entire cast gets in on the fun - with special kudos to Ms. LuPone for going there with such gusto and commitment, and to a very game Claybourne Elder who pulls off one of the evening's best tricks. The number, lately absent from productions of the show, is a perfect encapsulation of just what director Marianne Elliott has accomplished with her vision of this now apparently timeless classic. In that few minutes, you see just how funny the show can be, and how great it can be with a fully in sync, clearly happy-to-be-there company of actors. 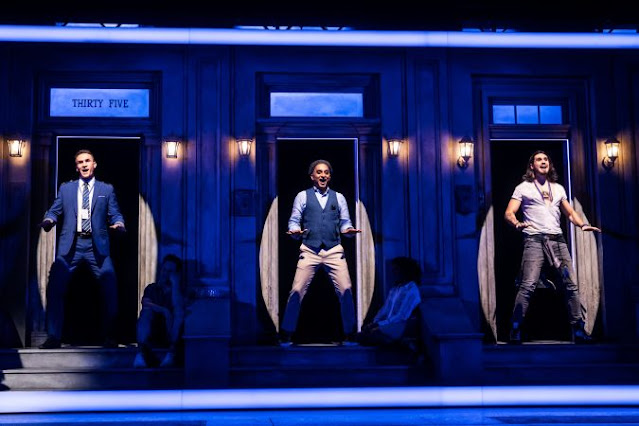 I won't waste your time with plot points, or the "gender-swapped" nature of the casting; there are millions of words already in print on all of that. But I will reiterate the oft-told point that by having the central character be a woman, and updating many of the others with a more modern perspective, the show, once thought to be "too 70's," is almost perfectly 21st century. And that's a great thing. Some slick lyric changes by the master himself, and some sharp orchestrations by David Cullen are really all that has changed. And while there are still a few minor things that date the piece (would any of these people really have an embarrassing number of magazine subscriptions? would deciding to stay together, but not stay married really be all that shocking in this age of throuples and open relationships?) George Furth's book remains both astute and timely. 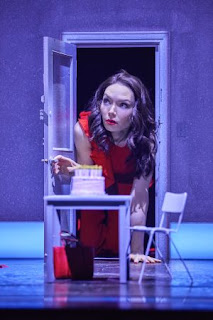 Elliott and her design team (Bunny Christie and Neil Austin) have created a neon framed world of boxes and title letters that glide in and out, managing to create both wide-open (a row of stoops and doors) and claustrophobic spaces (an apartment that shrinks, a barely usable balcony). How New York of them! Together, they've created a world perfectly suited for a heroine on an Alice in Wonderland trip, complete with rabbit holes, magical keys, and "Drink Me" bottles of Maker's Mark. there's even the urgency of the White Rabbit's ticking clock throughout - Bobbie's late for a very important, forced-upon-her date. (Side note: when you go, be sure to catch all of the "hidden" 35's on the set and costumes!)
The cast is aces from top to bottom, the casting is perfection. As Bobbie's suitors, Manu Narayan, Bobby Conte and Claybourne Elder, offer a variety of charms and types, together creating a thoroughly delightful "You Could Drive a Person Crazy," in all its Andrews Sisters glory. Conte's Millennial tinged "Another Hundred People" is presented in a refreshing way, while Elder really scores with "Barcelona" and the aforementioned "Tick Tock," both with his lava hot body and his character's empty head. Case in point: dressing after a roll in the hay, he begins to put a sock on his foot, realizes it's on the "wrong foot," and puts it on the other! Too funny. 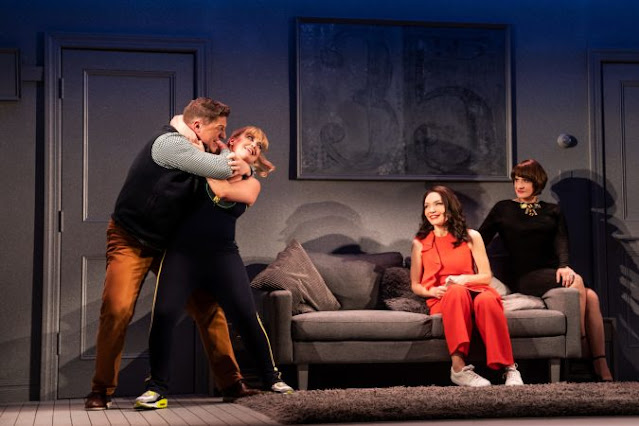 The rest of Bobbie's friends are couples. Christopher Sieber and Jennifer Simard bring their considerable skills in physical comedy in a pitch perfect "Little Things You Do Together;" Sieber is a master of subtle (and not so) facial expressions, while Simard has the level of comedic timing usually associated with Lucille Ball. As the happily divorced couple, Greg Hildreth and Rashidra Scott are just fine, though one wishes Hildreth had more to do. Scott is an absolute scream (and gloriously sung) in the "Getting Married Today" sequence, and is an actor I will look for more carefully going forward. 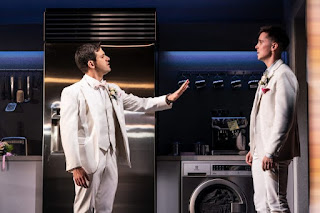 Speaking of that classic tune, Matt Doyle presents the new gold standard of that number, not only singing it perfectly (and clearly), but smartly acting it as well. Still, as great as he does that song, it is just one point of an all-around magnificent star turn. His partner in crime, Etai Benson is just as delightful, sweet, with an endearingly impish grin. Their chemistry is palpable, even - especially - when they are not the focus of the scene. Meanwhile, Christopher Fitzgerald and Nikki Renee Daniels are terrific as the couple of opposites - she's pragmatic and realistic, he's a bit scattered. Both are fun, with Fitzgerald, for the first time in the many shows I've seen him in, a delight of comedic finesse, with not a second of the self-serving over-indulgent acting he usually brings to the stage. I am actually looking forward to seeing him again.
Terence Archie may just have the most difficult task in the cast, having to hold up against one of the greatest Broadway divas alive today. And yet, he does just that; he is easily the best Larry I've seen. Arm candy when he needs to be, tower of strength, too, but his scene where he finally explains why he stays with his wife is a tour de force moment in a show full of them. Sensational. That moment is all the more remarkable given that it is in the same scene as the pinnacle moment of the show. You can see exactly why this man stays with the tornado that is Patti LuPone's Joanne. Wrapped in a protective cocoon of fur as her armor and a table full of empty martini glasses as her weapons, a motionless LuPone delivers a devastating, razor sharp "Ladies Who Lunch" that is hypnotic and thrilling all at once. We hung on every word, afraid to breathe too loud, that we might break her spell on us. Even with all of that - and it's a lot - for me, the joy privilege of seeing her perform is watching her when she isn't to focus. The consummate team player, she seems game for just about anything. Heck, she even moves furniture with finesse. 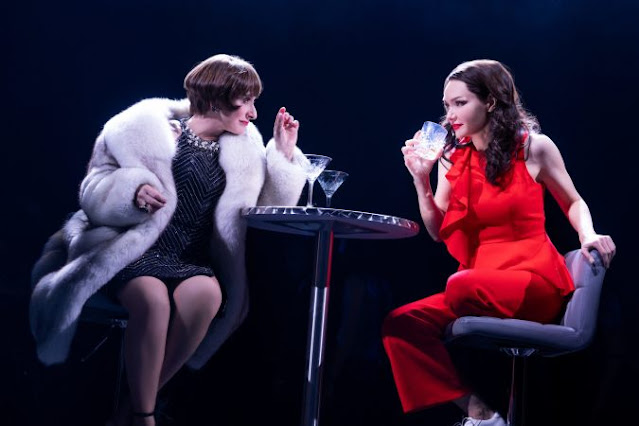 A lot of good and crazy things happen to the leading lady in red (an iconic costume to be sure) and Katrina Lenk's layered and delightful turn as Bobbie provides the show with a solid backbone and a heroine to root for. Her disarming, mischievous smile is all you really need to see to understand why her friends are so taken by her, and in turn, we are taken by her. It is fun to watch her watching them, as the part requires, but also fun to see her actively participate. Lenk is clearly having a ball. What makes her even more compelling is that she is giving a very full, thought out performance with nuance beyond other past performers who lean on the whole brooding, detached thing. Because playing the role with a high degree of authenticity allows for more honest, deeply felt emotion, her three "big" numbers are spectacularly crafted. "Someone Is Waiting" to "Marry Me a Little" to "Being Alive" is a character arc that is a mini-musical all on its own, and fuels the ending in a way I've not really felt before. She is honest and gut-wrenching, letting her emotions dictate how she sings each number, including tear-filled voice cracks. Those who insist upon a belty "Being Alive" would do well to find a recording by her co-star. That said, she is giving a brave and wickedly funny performance.
I hope to see this production again. This Company I'd like to keep.
📸: J. Kyler, M. Murphy
Posted by JK at 5:45 PM