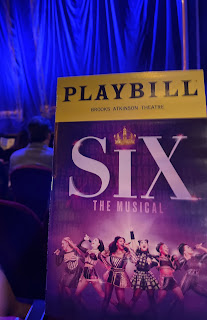 Review of the Sunday, December 12, 2021 performance at the Brooks Atkinson Theatre in New York City. Starring in historical order: Adrianna Hicks, Andrea Macasaet, Mallory Maedre, Brittney Mack, Courtney Mack and Anna Uzele. Book, music and lyrics by Toby Marlow and Lucy Moss. Scenic design by Emma Bailey. Costume design by Gabriella Slade. Lighting design by Tim Deiling. Sound design by Paul Gatehouse. Choreography by Carrie-Anne Ingrouille. Direction by Lucy Moss and Jamie Armitage. 80 minutes, no intermission. Grade: A+
We ended our whirlwind return to New York with one of the hottest tickets out there, SIX. Every once in awhile, a show's hype is not only warranted, but actually exceeds expectations. And this show is one of those rare gems. Smart and sexy, this royal concert is more than its flashy facade. 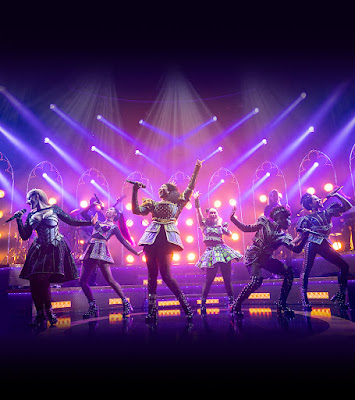 A textbook example of complete collaboration may be hard to find, yet here we have it: each element complements the next in an explosive triumph of stage craft. The cathedral-esque set (music is a religious experience, right?) by Emma Bailey provides the framework for Tim Dieling's ingenious lighting design. Both of which highlight Gabriella Slade's technicolor Tudor-meets-pop-diva costumes, which altogether showcase our queens in the very best possible way. The little Easter eggs on each costume (green sleeves, numbered earrings on each lady, chokers on the necks of the two beheaded wives...) are clever and smart. 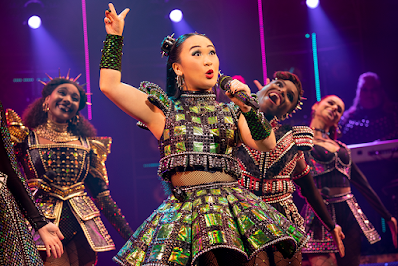 The book and score (by Toby Marlow and Lucy Moss) also work well together, with its instantly recognizable "songs in the style of X diva" and a barrage of jokes and modern sensibility. The result is a pace that leaves the audience breathless from laughter and cheers - the 80 minutes fly by. Even when, at the end of the show, it gets a tad preachy, it never flags. It is the perfect length - even the megamix at the end was svelte - and the writers were smart to keep it brief. Would that others were as judicious with editing a show. Ms. Moss, along with Jamie Armitage, provided to taut direction - I can almost hear them saying, "have a blast out there ladies, but give everyone a chance to shine. Don't over do it!" And the choreography by Carrie-Anne Ingrouille is just as impressively tight, with tributes to each genre of song implanted in a veritable cavalcade of girl group dance moves. I thought as I was watching, how impressively varied the formations were, what with only six people to use. I would love to see it from above the stage to see them dance Busby Berkeley style! 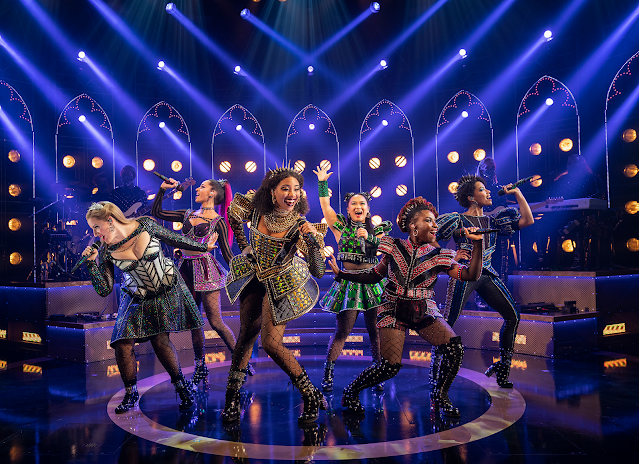 The Queens. Oh, the Queens! Six of the loveliest, sassiest, royally talented ladies currently gracing the stages of Broadway. All six (as well as their kick-ass band, The Ladies in Waiting) were utter perfection; I can't imagine how deep the pool of talent is at the Brooks Atkinson these days. We saw two understudies (Mallory Maedke as Jane Seymour and Courtney Mack as Katherine Howard), but you'd never know they all didn't appear nightly together (sorry, Charlotte St. Martin!). Our other queens that evening were Adrianna Hicks as Catherine of Aragon, Andrea Macasaet as Anne Boleyn, Brittney Mack as Anna of Cleves, and Anna Uzele as Catherine Parr. What was particularly wonderful was that in the spirit of the show they all lifted each other up. No one was better than the other, really. Platinum level excellence filled the stage. 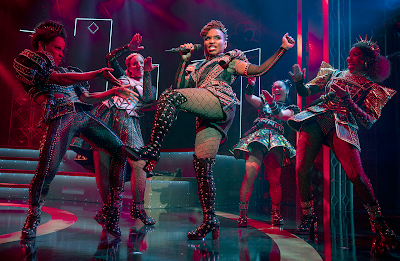 Though set up as a competition for the greatest queen of them all, it soon becomes apparent that you can't help but root for them all. That said, there were two individual numbers that I particularly enjoyed - Katherine Howard's "All You Wanna Do" evocative of Britney Spears and Ariana Grande, and Anna of Cleves' Nicki Minaj/Beyonce booty grinding tribute to wealth, "Get Down." That latter has had me singing to myself, "I'm the queen of the castle" over and over. The utter joy on their faces just added to the whole experience. And the opening number, "Ex-wives," and the finale, "Six," were the perfect appetizer and dessert for such a scrumptious meal.
Some shows make you think about the human condition, others just set out to bring happiness just by their existence. SIX falls into the second category. It is riotously funny, has a point, and is simply one hell of a great time. Do I know much more now about Henry's wives than I did before the? Not really. Did I walk out of the theatre feeling that giddy thrill of a great theatrical experience? You better believe it. I willingly bow to each of these royal talents.
📸: J. Kyler, J. Marcus
Posted by JK at 10:48 PM