SAVE THIS SHOW: Is Priscilla in Trouble? Hope Not!

Every year both USA Today and TV Guide launch campaigns to "save" shows they like from cancellation due to low ratings.  I think that today, I am going to launch a one-blogger campaign to save a show that I love from what appears to be impending "cancellation," also known in Broadway parlance as "closing."

SAVE PRISCILLA QUEEN OF THE DESERT!
OK, all cards on the table: I have no information that confirms that this show is in trouble of closing, and am only basing the following on opinion and certain things, that, over my long history of observing the comings and goings of Broadway shows, leads me to believe that Priscilla Queen of the Desert may be in danger  of closing sooner, rather than later.

First and foremost, the numbers are not good, and have not really been good over the past several weeks - Easter week, not withstanding.  The most recent Broadway Grosses have the show at just 56.3% of capacity at the Palace Theatre.  This is the third lowest percent of capacity of any Broadway show, play or musical (only RAIN and the newly previewing Hair are lower).  Of course, I have no idea how the advance is; perhaps the early fall has an uptick that I am unaware of.  I sincerely hope that is the case. 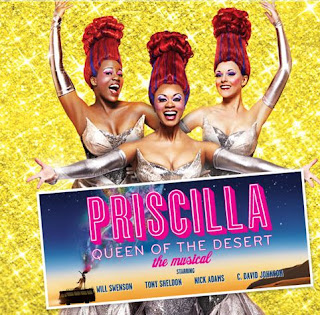 Second, and generally a sign that things are needing to be changed is the unveiling of yet another advertising tack.  The most recent before the commercial I'll discuss shortly was a good, if silly, attempt to capitalize on the show's lone Tony win - "Winner! 2011 Tony Award for Best Costumes!"  Not a single mention of the other (publicly lesser) awards the show has received.  And now a third ad campaign has been launched.

Here is their latest commercial:

Dubbed by the company as the "Three Friends" commercial, this ad is clearly trying to distance itself from its drag queen roots.  There is not a single close up of a drag queen or any of the "three friends" in full get up, either.  And bless 'em, Tony Sheldon looks so much like a woman, the quick champagne toast he shares with Bob in the spot, could go by to the untrained eye as "love" found in a most conventional way.  Poor Nick Adams, scorching hot as "Felicia," gets no air time, but his young Adam smiles and struts a few times.  But let's face it, Priscilla is so gay you'd have to be blind (and deaf; it is raining men, after all.  And so why not cash in on the wave of good will that has overtaken New York, where gay marriage was just legalized, and show our gay hero (Will Swenson) reuniting with his precious (and seriously adorable) little son on his way to sure and true love!   Please don't mistake my tongue-in-cheek tone with disrespect.  I applaud any and every attempt made in order to get more asses in the seats.

But the other aspect of the ad is the one that they should really be cashing in on: the element of fun spectacular Broadway entertainment, with a score full of songs that people of my generation can sing word for word.  Having our 80's heroine (and show co-producer) Bette Midler invite us is a big plus to go along with the dance numbers, flashy sets and crazy costumes showing whilst she narrates.  The 80's generation and the gay population remain the two groups with the most extra income for Broadway show tickets, so again, this is smart.

Since decent seats to the other really fun show on Broadway are months off at best, the producers of Priscilla  might do well to court the producers of The Book of Mormon, as well as their fans, who might enjoy a "fun fix" before next April.

I am telling you, Priscilla is a Broadway show that has it all - glitz, glamour, a teeney bit of naughtiness, a lot of smiles, fabulousness.  And it is HILARIOUS, and still manages to be smart, to have a point, and best of all, to have a heart.  Pack a tissue and a small bag to collect the confetti that rains down (in lieu of men) on the delighted audience at every performance!  People throw around the term "feel good musical" a lot these days.  But I can pretty much guarantee you will feel much better than good after you see this show.


Rate this blog entry below.  And please feel free to leave a comment here, email it to jkstheatrescene@yahoo.com or Tweet me!
Jeff