All you have to do is look at the names of this year's Primetime Emmy nominees, and you can see the impact New York stage actors have on television's best programs and individual performances.  If you only look at the Best Lead and Supporting acting categories for comedy and drama, no less than 25 of the 48 nominees have major credits on and off Broadway.  And another 22 nominees in the rest of the acting categories can boast the same.

Among the Emmy nominees are several Tony nominees, including Laura Linney, Edie Falco and Martha Plimpton, who are up against each other for Outstanding Lead Actress in a Comedy Series.  Tony nominee Alec Baldwin is up against recent Broadway newcomers Johnny Galecki (The Little Dog Laughed) and Jim Parsons (The Normal Heart) for Outstanding Lead Actor in a Comedy Series.
Four of the six nominees for Outstanding Supporting Actor in a Comedy series have Broadway credits, including the 3 men from ABC's Modern Family: Ed O'Neill, Ty Burrell, and Jesse Tyler Ferguson.  Another of the nominees, Chris Colfer of Glee, has no Broadway credits to date, but he has made a career thus far covering many a Broadway show tune.

Martha Plimpton in TV's Raising Hope
and Broadway's Pal Joey
And every nominee in both the Outstanding Guest Actress in a Drama Series and Outstanding Supporting Actress in a Miniseries or Movie has New York credits, including almost Mary Jane Watson, Evan Rachel Wood, Melissa Leo, Alfre Woodard, Mary McDonnell and Loretta Devine. 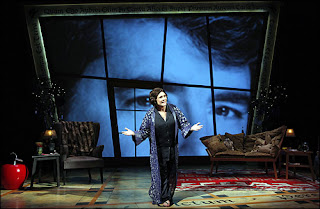 Broadway AND TV's
Carrie Fisher: Wishful Drinking
Broadway is also certainly represented in the show categories as well.  Both The Kennedy Center Honors, Sondheim: The Birthday Concert and The 64th Annual Tony Awards were nominated.  And actual Broadway productions have been nominated as well, including: Thurgood, Carrie Fisher: Wishful Drinking, The Pee Wee Herman Show on Broadway, and Colin Quinn: Long Story Short.

It has been a great year for Broadway... and TV has been just that much better this year with Broadway so well-represented!  Congratulations to all of this year's Emmy nominees, all of them!

Rate this blog below, and leave a comment here, email me at jkstheatrescene@yahoo.com or Tweet me!
Jeff
2.322
Posted by JK at 12:01 PM