An all-star cast and legendary creative team have joined forces with Roundabout Theatre Company to create a new off-Broadway musical, Death Takes a Holiday, based on the original play by Alberto Casella﻿.  The folks over at Roundabout may have a somewhat uneven track record of hits and misses as far as their shows go, but their show logos and advertising are always first rate; Holiday is no exception.
Let's first take a look at the title and "catchphrase."  First, the color, a muted yellow is the perfect choice pratically and artistically.  Practically speaking, the yellow catches the eye and works wonderfully with the grey-blue background of the rest of the image.  Artistically, the yellow, being muted instead of bright and vivid, has a calming effect, yet still speaks to a certain vitality, meaningful in conjunction with the title and central character, "Death."  Then there is the lettering itself, slightly arched, instead of boldly straight as an arrow, which again speaks to a vitality tempered with a calm relaxation.  Notice, too, that the word that probably carries the most weight, "death," is actually secondary in size and letter style to "holiday."  Clearly, the authors and the show itself hope to draw us in with the "holiday" (vacation) aspect of the piece rather than the potentially frightening aspect of "death."  All three typefaces used here have a definite "long ago" feel to them, and in conjunction with the central image of the logo, tells us that we are going to be transported to another time.  The color and typefaces also have a regal, upper-class connotation, thus letting us know that we will be on holiday, during a time ago, with the upper echelon of society.

The catchphrase, a play on the typical "a new musical" or "a musical," speaks volumes about the play both literally and figuratively.  But calling the show "a breathtaking new musical," two thoughts come to mind: literally, the show, like the romance depicted in the image below, will take your breath away.  True love that sweeps you off your feet does just that.  What else leaves you breathless?  Why, death, of course!  The double-meaning here speaks to the wit and sophistication of the material at hand.  It tells us at once that we are in for a love story of epic proportions and a sense of humor that requires you bring your heart and mind with you.  It, like the word "death" in the titling, are subtle reminders that while the fun of romance and holidays are at the forefront of the show, death also lurks and importantly so in this piece.  What a brilliant use of four words! 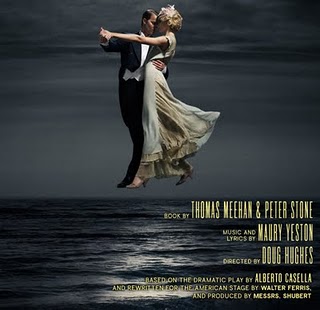 Just as the title and catchphrase reveal the content and tone of this new musical, so, too, does the imagery used in the logo.  Against a dark grey-blue sky, with a cloud covered and/or unseen moon, and over a calm body of water (not quite a "dead calm"), a faceless couple dances.  They are so into each other, so enraptured by the partnership, that they are facing each other and see only each other.  Both figures hold tightly to each other as they are perhaps doing a tango or other dance of passion.  With hairstyles that reflect the late 19-teens/early 20's, with dapper, elegant clothing to match, we know the time of the show.  The clothing, also period, yet somehow classic and never out of style reflects a certain timelessness.  And nothing is more timeless than either love or death.  His black tuxedo and her floor length, satin finished gown match each other perfectly, with her gown floating around her ankles.  The duo, floating above the water, is hovering above the ground, just as the feeling of intense love makes us feel.  Or are they dancing off to another plane of existence?  Is this a dance of love?  Or is it the dance of death?  The two are inextricably intertwined.  And so are the two in the play, and now in the musical version.
Is the musical going to live up to its beautiful, thought-provoking logo?  We'll find out tomorrow.
Grade: A+
Rate this blog below and please leave your comments here, or email them to me at jkstheatrescene@yahoo.com or Tweet me!
Jeff