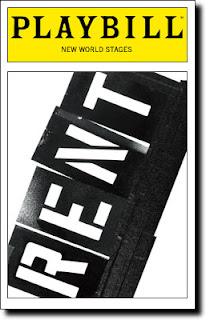 If it ain't broke, don't fix it.  That little axiom is true in most aspects of life, I've come to find out.  People, in general, are resistant to change, especially when it comes to things they have a personal/emotional connection to.  So it is probably a good thing that - for the most part - the powers that be at RENT have chosen to stay with the tried and true for the show logo.  It is, arguably, as iconic as the logos for Cats, Phantom and Les Miserables.  In fact, if you look at all of the 10 longest-running shows in Broadway history, all 10 have logos that are easily recognizable beyond the theatre community.

I have to admit, that for all of the press and posturing that has gone on with respect to this off-Broadway return and its "re-envisioned" direction and presentation, I am a bit surprised that virtually nothing has been done to separate this version from the original in terms of advertising.  It might be a wise choice given the intensely loyal RENT-heads and the relatively short time since the original production closed.  The clean original logo, as well as ads with "No Day But Today" playing in the background, might draw them in, and it will likely draw in those folks who missed it the first time around.  It is hard to imagine, isn't it, that anyone has missed this classic.  But consider that anyone born in 1996, when the show premiered, would now be only 14 or 15 years old... just old enough to be a part of the show's target audience (at least the youngest end of that scale).  This way, a new generation can feel like it is experiencing what their older brothers and sisters, and even parents did, "way back in the '90's."

As a logo, it works on many levels.  The simple stencil letters hastily taped up with shards of uneven tape tell us a lot (as does the "spray painted" negative version).  First, it tells us we aren't dealing with "rent" as it applies to swanky apartments in the upper East Side.  No, that lettering would be ornate and metallic looking.  The haste of the tape job and uneven spacing of the letters also implies that perhaps this is going to be graffiti sprayed onto a wall or other structure in the low-rent district.  The addition of a poorly inked old typewriter style of lettering for the rest of the show information also calls to mind the handbills put together on the cheap to advertise cheap places to live, local concerts and events, and definitely protest events.  All of those, of course, figure prominently in the story of RENT.

Then, too, as my buddy Mike pointed out, the word "rent" doesn't just mean "money paid to a landlord," but it also means "torn to pieces."  The logo certainly gives off that vibe, and the show supports that, too.  Let's face it.  In many ways, these characters are torn apart, ripped into pieces, fixed up and torn again.

Keeping it familiar and simple also keeps down costs while still looking subversively stylish to RENT-heads old and new, who will soon be restocking their show memorabilia collections with all that this new version has to offer.  And I have to admit that I really like the new spin on the old logo.  Notice that you get the negative version of the main logo against a background of that cool typewriter type style that lists all of the songs in the show, right down to the phone messages.  This is an instant memory-maker, with everyone's favorite songs listed - perfect for fans of "Light My Candle" who are maybe not wanting to buy one more thing that says, "No Day But Today" or "La Vie Boheme."  But if you love those songs or the whole score, everyone is invited to enjoy the t-shirt it is printed on.  It is also a plain reminder that all of the show songs are here and this is not a stage version of the film.  Most fans of the show will find that important, though this admitted RENT-head is in the minority.  I loved the film version, too.

How all of this will impact the enjoyment of this new version remains to be seen.  (If it impacts anything at all.)  But it certainly leads you to believe you are seeing the "authentic RENT."  What happens when you get into New World Stages, and the new RENT is not as much like the old as you'd expect?  (I'll tell you in my review next month...)


Rate this blog below, and leave your comments here, email me at jkstheatrescene@yahoo.com, or Tweet me!
Jeff
2.325
Posted by JK at 3:01 PM