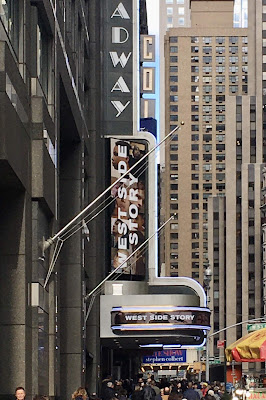 After a somewhat troubled and controversial preview period, Ivo Van Hove's startling and supremely satisfying production of West Side Story has finally barreled onto Broadway. Much has been made of this stripped down,  streamlined version with its song cuts, video projections and deluge.  Purists will probably hate it, then go right back to bemoaning that old musicals need to be updated. Like so many classics, from Shakespeare to Chekhov, Broadway has played host to radical reinventions for centuries. What is new this time around is that American musicals are now old enough to be done in modern dress, while still retaining the words (most of them) and music (most of it) of a bygone time. That said, the biting realism of this show almost makes last season's equally superb Oklahoma! seem pedestrian. What do they say these days? Oklahoma! walked so West Side Story could run. 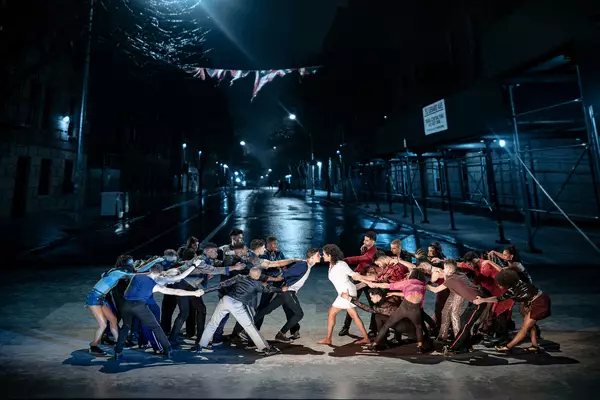 Van Hove, together with his design team, has created a black box urban anywhere anytime space, focused almost entirely on the humanity within its confines. Only two times does Jan Versweyveld's setting allow us into an extreme, detailed, realistic realm: Doc's drugstore/bodega, the home base of the Jets, and the dress shop, the home base for the Sharks. And even then, they are at a far distance, with the action frequently out of view, and very rarely spilling out into that black box. We do see what's going on though, via an enormous video screen that shows us the action as if we are watching surveillance camera footage - apt and so of this time. The video action, both live and prerecorded, was brilliantly designed by Luke Halls. Sometimes the feed shows us commentary, such as when we see the Jets, in slow motion, horsing around on the streets of Hell's Kitchen. On screen, they smile and playfully tease, while the actors, downstage seethe with rage and look ready to explode. Other times, we see tight close ups of the current action - Riff and Bernardo confronting each other at the gym, bloodied faces at the rumble - which have a more documentary feel to them. Still other times, the feed provides disturbing social commentary, such as the police brutality images during "Gee, Officer Krupke."  Versweyveld's moody, intense lighting and An D'Huys' evocative modern dress add to this volatile world. 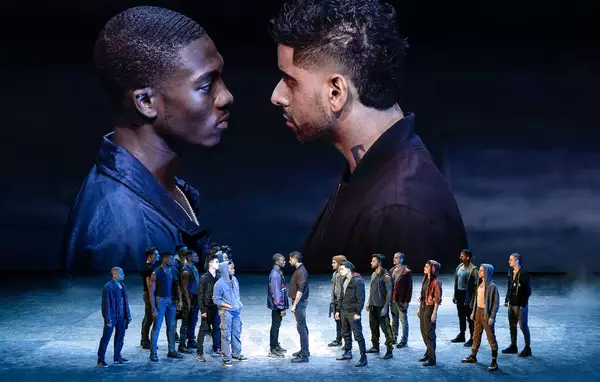 Still, nothing about this is not true to West Side Story, really. The darkness has always been there; it has never before been so pointed and, well, harsh. This is a West Side Story that not only plays out the tragedy of Tony and Maria, but also the ongoing tragedy of systemic racism and yet another generation lost to violence. For the first time, too, we finally have women that are given full agency; they are strong and fighting just as hard to survive. These are not girls who function as arm candy or who spend their evenings prissing around after work. It's not about feeling pretty or being sexy, it's about knowing what they want and going after it.  Here, Anita is as brash as ever, but Maria is just as sassy. She is ready for this world and doesn't have to feel pretty. She already knows it. No, the women have not been erased, rather they make bold, often silent, but wholly necessary contributions.

Van Hove's staging and Anne Teresa De Keersmaeker's modern, beautifully athletic dances are so seamlessly intertwined, it is hard sometimes to figure out where one ends and the other starts. Normally, movement is used to punctuate the story; not so here, where the few times things actually stop moving it startles and jolts you into paying even closer attention. But having the company constantly running - often in circles - speaks to the energetic pulse of youth and the urgency of desperation, all in an endless, inevitable cycle. There are instances where the gangs aren't running, but are pacing, jockeying for position, fidgeting and jerking around as if their lives depend on it. The staging of "Tonight," sans fire escape has never felt more urgent, as the outside forces that will be their doom try to pull the star-crossed lovers apart before they even get started. "The Dance at the Gym" is exciting, tense, too, while "Cool" is like waiting for a bomb to go off, and "America" is as catchy as ever, but never so germane to the national conversation.

The cast, a truer reflection of society than in previous stagings, brings a realistic gravitas to the piece, even as it points out that the rival gangs are all outcasts, more similar than different, while going through the inevitable "them vs us" of alleged privilege. In a raw and wonderful history-making Broadway debut as Riff, Dharon E. Jones commands the stage, while Amar Ramasar offers an arrogant, superbly danced Bernardo. The various Jets and Sharks each offer fully realized characters, with standout work from Ricky Ubeda, Kevin Csolak, Matthew Johnson and Elijah A. Carter. Zuri Noelle Ford gives a very modern, gender fluid take on the role of Anybodys.  Each of the adults are just as terrific with Daniel Oresekes' worn down Doc, and Pippa Pearthree's optimistic, not naive Glad Hand, shining brightly in all the gloom.

With a stronger Maria, it may seem that Anita seems somewhat slight, but I don't agree with that. She is to Maria what Tony is to Riff, a more mature, knowing support system. As I said earlier, Anita has not lost any of her sass or strength though, especially in the hands of Yasenia Ayala. Yes, she is great in the gym scene, and she kills it in "America," but her moment at Doc's where she is (graphically) sexually assaulted, screaming in terror and rage is as breathtaking as it is shocking. (Kudos, too, to Matthew Johnson, as Baby John, forced upon her, who looks just as scared and mortified.) 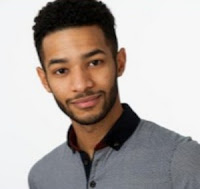 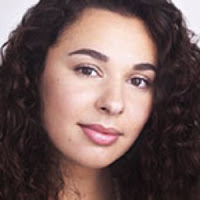 At the performance we attended, both Isaac Powell and Shereen Pimentel were out of the show, but we had the great fortune to see Jordan Dobson (Tony) and Mia Pinero (Maria), both making their Broadway debuts. Both were absolutely stunning, in virtuoso performances. Their chemistry was palpable and their singing was flawless. Tears flow from my eyes; I have never felt West Side Story so deeply before.

The show has always been a favorite of mine - I've been in it and directed it - and I'd go so far as to say it one of the greatest musicals of all time, if not the greatest. But it is no exaggeration on my part to say that this production moved me, angered me and overwhelmed me in unexpected ways. And I've thought of little else in the month since I saw it.

STARTS MONDAY! Click the image above & vote for your favorites!