On the Radar: Yank! A New Musical

You might find it strange that as a gay man, I am not necessarily drawn to gay theatre. In fact, as gay themes, characters and storylines have become more mainstream - possibly even more than commonplace - I have become almost tired of its inclusion into almost every play or musical I see. Don't get me wrong. I fully support the "normalization" of homosexuality into mainstream popular culture and psychology. I think it is very important for audiences to see that being gay is a regular, everyday fact of life, full of the same ups and downs, pitfalls and triumphs as so-called "straight" life. But it strikes me as odd that I find myself thinking things like, "Wow, that was refreshing. Not a gay character or undertone the whole show!" Or that I think, "I just realized that was the first show I've seen in months that didn't have something to do with being gay." (My three current favorite shows, Memphis, next to normal, and A Little Night Music have nothing to do with homosexuality, for example.)

And so, I've become more selective and harder to please when it comes to gay-themed musicals and plays. In fact, of what is coming up this season, I am looking forward to only two shows with gay themes, characters and storylines: the play Next Fall, which intrigues me by its reported emotional response from critics and audiences alike (I love to laugh and cry...) and the show I am writing about today, Yank! A New Musical. 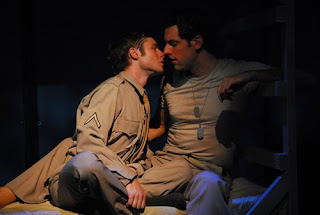 I have to admit that a gay love story between two Army recruits intrigues me in this age of (STILL, Barack?) "don't ask don't tell." And I am a sucker for romance, which I understand is a nice part of this show, as opposed to tawdry sexuality. But I am possibly even more intrigued because it covers a little discussed aspect of an era that I have always been drawn to, World War II and the 1940's - an era of heroism, grace, style and function that the world has not seen since. The music, the dancing, the living life like there may be no tomorrow, the unity of people, battling a huge practically unbeatable foe. Hence, I am smitten with movies like Pearl Harbor, plays like The Diary of Anne Frank, Bent, Biloxi Blues, and so on. 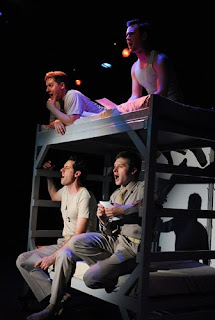 And so I am really looking forward to Yank! A New Musical coming soon to the York Theatre. Of course, if you follow theatre regularly, you know that this show has been on and off the radar several times, with its inaugural production in 2005 at NYMTF, and later in 2007 at the Gallery Players. The show also played an acclaimed run in San Diego in 2008. Throughout its various incarnations, several things have remained constant, even as the show itself has been revised, tightened and re-framed by brother co-authors David Zellnik (book and lyrics) and Joseph Zellnik (music). Among those things are critical and audience acclaim (the show won the audience award for Best Musical at the 2005 NYMTF), director Igor Goldin, and choreographer/co-star Jeffry Denman. And recent Ragtime refugee Bobby Steggert rejoins the show; he co-starred in the 2007 Gallery Players production. 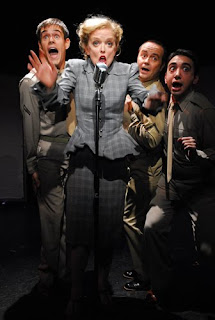 I am most looking forward to seeing the story unfold, infused with era-evoking swing, big band and other styles of the time. Yank! tells the story of Stu, a new recruit, who is terrified by what he is facing, and not just on the battlefield, but at boot camp. Will he be strong enough? Does he have what it takes to man up? Can he keep his secret – that he is gay in a strictly straight world? Things get complicated when he shares an awkward kiss with a fellow recruit, Mitch, who is confused and wants to remain steadfastly in the closet. Enter Artie, an outwardly gay reporter for the Army newspaper, Yank!, who befriends Stu, and saves him from frontline disaster by making him his photographer. The plot and characters (including all female roles being played by one woman, and the rest of the guys playing several characters as well) is ripe with theatrical possibility. And any show that’s been back to New York now three times must have something going for it, right?

(All photos are from the 2007 Gallery Players production. The Yank! logo is from the York Theatre website.)

Comments?  Leave one here or email me at jkstheatrescene@yahoo.com.
Posted by JK at 12:02 PM