Looking Back: Twyla Tharp's The Times They Are A-Changin'

With Twyla Tharp's newest musical, Come Fly Away poised to dance its way into the Marquis Theatre, I thought it only appropriate to take a look back at her other dance-musicals, starting with 2006's flop, The Times They Are A-Changin', an original story set to the music of the legendary Bob Dylan.

THE STORY
Set "sometime between awake and asleep," the musical's setting is a travelling circus, with some seriously dark overtones. The main story concerns the son (Arden) and father (Sesma) and whether or not the son will take over from the father - not only the circus itself, but his evil ways and his lover/captive, the runaway girl (Brescia). Add to the mix the clowns, acrobats and camp dog, and you have an evening of high-flying, stilt-walking, trampoline-bouncing evil circus, all set to the eclectic tunes of master songwriter Bob Dylan.

The story weighed pretty heavily on the show, so much so that a complete synopsis was included in each Playbill. Part allegory, part metaphor and quite pretentious, having to include a synopsis should have been the first clue that something wasn't working.

THE CRITICS
The critics were nearly unanimous in disliking the show, many placing it on their year's worst in theatre lists. And they were completely unanimous in praising Tharp's previous work, Movin' Out, another dance musical based on the narrative songs of Billy Joel. Many opined that that was the chief problem: where Joel's songs fit together into a cohesive story, which then lent itself to super-imposing themes and emotional content, Tharp herself super-imposed meaning rather heavy-handedly over Dylan's classic songs which might have stood better separately than shoved into a strange story. 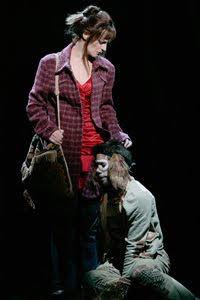 Many critics praised the singing/acting of Arden and Brescia (above), while split on Sesma, maybe because his character was the most heavily symbolic. They also praised what dancing there was, though most agreed it was short on dance and much too long on visual trickery, particularly with the prominently downstage trampolines. John Selya came through pretty much unscathed, though Jason McDole (above) in his Broadway debut divided the scribes with his rendition of a dog. Yes, he played a dog.

Ben Brantley of The New York Times used phrases like "'When Bad Shows Happen to Great Songwriters'," and "Tharp turns lyrics' metaphors into flesh... props rule in this magic kingdom," and he ends with, "Even as the dancers seem to fly, Mr. Dylan's lyrics are hammered, one by one, into the ground." But he also had high praise for Tharp's Movin' Out ("gloriously redeemed the jukebox genre") and Tharp herself ("[she is] one of the bona fide, boundary-stretching geniuses of modern dance"), though he concludes his praise with "when a genius goes down in flames, everybody feels the burn."

THE CONTROVERSY (BLAH BLAH BLAH)
Even during its short two months, Times was not without its controversy. Caryn Lyn Manuel was rather noisily replaced by Brescia during previews. And there was, just as has been recently reported with Come Fly Away some jurisdictional arguing between the AEA and the dancer's union, AGMA, with Times. In both cases, the tension is over who can provide the best contract vs the cost to the producers. Law suits filed, blah blah blah. Pretty much business as usual. 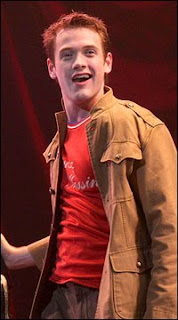 MY THOUGHTS
A huge fan of dance, and particularly of Movin' Out, I couldn't wait to see Times. I caught the second to last preview, so I'll assume what I saw was pretty much the final product. I liked the music the least, though the friend I went with said he felt that the musicians were at least faithful to Dylan's originals. And I felt the story and literal fashion of much of the dance to lyrics was mostly pretentious and over-wrought.

Yet, I sat mesmerized for the entire 90 minutes. No, I didn't feel like I was watching a train wreck, and no, I didn't want there to be an intermission so I could leave. I thought that by itself, the staging, along with the acting and singing were all top-notch. I remember literally thinking "this is way ahead of its time." The acrobatics and circus imagery were breathtaking, Thom Sesma was villainously creepy, and I actually cared about what happened to Lisa Brescia's character. But Michael Arden was fantastic in all ways. What a voice! What a presence! Boyishly charming, and manly strong, he was perfectly cast. (And I thought Jason McDole's dog was a delight - he was uncannily like a dog, and really put every single one of the Cats to shame.) 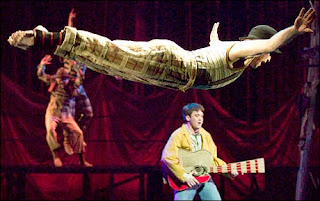 I knew in my heart that it wouldn't last long, but I thought the show was worthwhile and enjoyable on the whole.

WHERE ARE THEY NOW?
Interestingly, Michael Arden has yet to reappear on the Broadway stage (I hope he isn't going to end up on that "promising but never made it" list I referred to yesterday), though he did assistant direct another Broadway flop, A Tale of Two Cities. He did tour Europe with Barbra Streisand, and he was announced for (and later removed from) Sondheim on Sondheim, but mostly he's been doing guest spots on TV. We haven't heard from Thom Sesma since, and Lisa Brescia has done several readings and is often a part of Broadway/Cabaret concerts.

The dancers continue to dance - John Selya and Charlie Neshyba-Hodges are both attached to Come Fly Away, and Lisa Gajda has been in nearly every dance-heavy show since Times, including Cry-Baby, Pal Joey and currently, Finian's Rainbow. The same can be said for Ron Todorowski, who most recently appeared in the tour of A Chorus Line and the recent revival of Guys and Dolls along with Mr. Selya.

Love it our hate it, Times was one of those shows that galvanized audiences, divided critics, and pushed the envelope. It, like so many shows, was not as good as its intentions, but not as bad as the criticism it garnered.

I'll take a look at Movin' Out in the coming weeks before the opening of Come Fly Away.

Comments? Leave one here or write to me at jkstheatrescene@yahoo.com
Jeff
Posted by JK at 12:01 PM