Looking Back: Twyla Tharp's Movin' Out 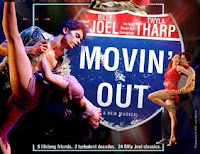 Recently, I took a look back at Twyla Tharp’s most recent Broadway show, 2006's flop, The Times They Are A-Changin', an original story set to the music of the legendary Bob Dylan. Her latest, Come Fly Away, opens this late winter/early spring at the Marquis Theatre. I hope this newest effort is every bit the success of her first big hit, Movin’ Out. (It should be noted here that Movin’ Out was not her first Broadway show; it was actually her fourth. Her biggest success prior to this one was the 367 performance flop stage adaptation of Singin’ in the Rain, a property which, to me seems directly at odds with Tharp as an artist. Still, the show is a staple nationwide.)  But I digress. To date, her biggest hit and most acclaimed musical is Movin’ Out. Here is a look at that show. 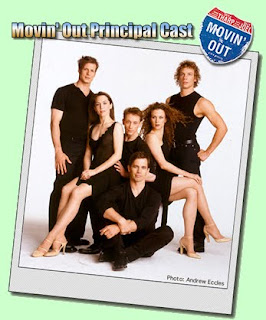 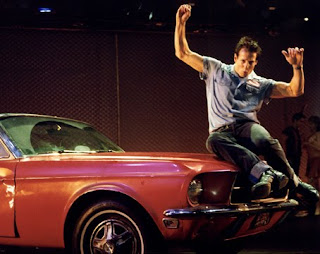 Set to the pop hits and classical compositions of Billy Joel, Movin’ Out tells the story of teenage friends Brenda and Eddie (they start out as boyfriend and girlfiend), James and Judy (an inseparable and truly in love couple) and Tony, a friend to both of the guys. Their youthful exuberance and abandon is abruptly taken from them as the three guys are whisked off to Vietnam, leaving Brenda to sow her wild oats after a break up with Eddie, and Judy to worry about the love of her life. James does not return alive, sending Judy into a deep despair, and leaving Eddie and Tony feeling guilty that it wasn’t them. Both deal with the return to civilian life in different ways, Eddie with drugs, Tony (Keith Roberts and Elizabeth Parkinson, below) with sex and unsuccessful relationships. Eventually, Judy brings them all together as a way to honor their friend, and the remaining four, broken, but mending look forward to the rest of their lives.


Part cliché and part revelation, the show is given broader audience access through the familiar lyrics and tunes of Joel’s catalogue of pop standards and tried and true character types. But the dance that is presented for each song brings out the depth and pain that is hidden throughout the songs, and the characterizations go far beyond the easy stereotypes that they are at first. 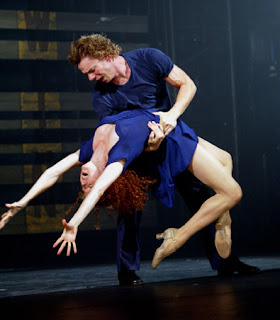 Hindsight, they say is 20/20, and the critics were completely unanimous in praising Movin' Out, while lambasting her later effort, The Times They Are A-Changin’. That is not to say the reviews weren’t good for the show when it opened in 2002, they were. But they were tempered by a fear of praising that most reviled of musical sub-genres, the jukebox musical. Clearly, this was a serious undertaking – not the frothy fun of Mamma Mia, but more like Susan Stroman’s Contact, which was a dance play that stunned the theatre community by not only being a smashing success, but the Tony winning Best Musical of 2000. After taking heat for over-praising that show (at least by some), the critics also seemed reluctant to give Movin’ Out its full stamp of approval. Every high praise had a caveat. But there were several things that all of the critics agreed on. 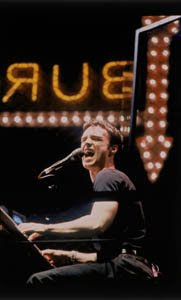 They all loved Michael Cavanaugh’s vocals, which, they opined, was enough like Joel to satisfy his fans, and full and interpretive enough to please the drama critic in all of them. They also heaped praise (deservedly so) on Ms. Tharp’s choreography; many mentioned how each little out of balance twist and turn, coupled with breath-taking acrobatic moves created rounded characters and brought out the nuance and subtlety of Joel’s lyrics. To a person, they loved the corps of dancers, with particular praise for John Selya, Elizabeth Parkinson and Ashley Tuttle, as well as the ensemble in general. Any short comings were chalked up to issues they had with very specific moments of Tharp’s direction and occasional hyperbole.

Ben Brantley of The New York Times summed up the critical response in his own review by saying, “Ms. Tharp's production has little of the old-style showbiz wit and flourish that Ms. Stroman brought to her delightful trio of danced playlets. Nor does ''Movin' Out'' trade as obviously as ''Mamma Mia!'' does on what might be called the karaoke quotient: the pleasure in listening to familiar feel-good music that makes you want to sing along… Michael Cavanaugh (above), who performs on a platform above the dancers with an excellent 10-piece band. There's a self-contained polish about his singing that does not encourage theatergoers to join in. Up to the show's finale, you're unlikely to feel any overwhelming urge to tap your feet or shimmy your shoulders.”


I love to watch excellent dancers perform excellent choreography (my thoughts on West Side Story corroborate that) and Movin' Out provided me with hours of such pleasure. I saw it three times on Broadway and several times on tour. It speaks to the quality of the piece, the director and the dancers that each time the show got richer and deeper, just the opposite of what happens to many long-running shows that become a parody of themselves. I sat in stunned silence the first time I saw it, and wept openly at Judy’s anguish, which closed act one, and wept yet again at the flashback sequences in act two that showed us what happened in Vietnam. As I type this all these years later, the goose bumps are fresh at just remembering the penetrating throb that went through my body as the sound of helicopters approached, hovered and finally left, an aural symbol of tat bloody conflict. I loved every single minute of it, even embracing the sweet, if unlikely ending (below). 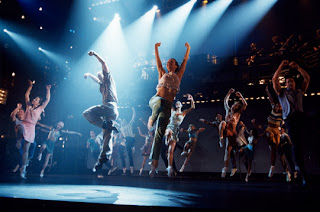 WHERE ARE THEY NOW?

Several of the original dancers went on tour with the show as did many of their replacements. And several joined Tharp for her next project. John Selya was also featured in the recent revival of Guys and Dolls. Elizabeth Parkinson has since had children with husband and co-star, Scott Wise. And many of the ensemble had and continue to have much success in a variety of shows as accomplished Broadway dancers, including Rod McClune, Pascale Faye and Scott Fowler.

Come Fly Away will again feature many of Tharp’s principal dancers. For more information on that show, click here.