They say that "art imitates life." Well, lately it has been my experience that just the opposite is true: life is imitating art all around me.

This little epiphany came to me over the weekend, while I sat here hibernating through a nasty snow storm, fierce winds and temperatures that would send a polar bear running. This winter, so far, is like the ones I remember happening more frequently when I was a young kid. Every Christmas was a white one in these parts. Then Al Gore, I mean global warming really kicked in, and winter like this is the exception, not the rule.

Anyway, not unlike the children in The Cat in the Hat, I was staring forlornly out the window, bored silly. Mind you, I could have shoveled, dug out my car, or spent my time reading a good book or any number of things. But I was sort of mesmerized by the snow outside the window, at times swirling fiercely, at others peacefully falling. That is when it came to me! I was inside the snow globe that is the White Christmas logo!

I sat pondering that deep thought for what felt like an hour, but what was really about a minute. Into view came a group of kids and an adult, all carrying gym bags. I recognized Dan and his son Little Dan from down the street, and remembered that Dan volunteers his time on the weekends by supervising the gym which is part of our community center, about 3 blocks from where I sat. There was one kid straggling behind, kicking snow and looking glum, when it occurred to me! What if this kid happens into a dance class at the community center? Judy the ballet mistress (she does a mean Nutcracker every year) isn't nearly as bold and crass as Mrs. Wilkinson, but I'd bet she could turn this straggling boy into a great dancer, just like Billy Elliot! 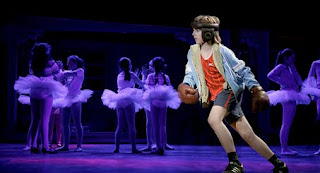 OK, so I finally got off my lazy butt and went outside to clear the sidewalk - I had seen my mailman trudging up the other side of the street, and thought it only kind to shovel him a path before he got to my house. As it turns out, I didn't actually get much snow clearing done because almost as soon as I got out there, he showed up and handed me my mail. He looked miserable, but he wouldn't accept an invite into my house for a hot cocoa or tea. But he did admit my house looked kinda cozy, what with the "smoke coming out of the chimney." I didn't have the heart to tell him that it was really the steam vent from my dryer that was puffing up the back corner of the house. Still, at that point, we both paused to take in my "cozy" home. It hit me then that looks can be deceiving! Just as my house doesn't have a chimney, but acts like it does, other homes appear to be normal, but aren't! My little white house with the black shutters looks remarkably like the Goodman house in next to normal! 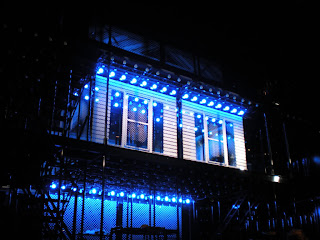 So, I walked back into the house, carrying the shovel, not using it, humming "I Miss the Mountains," and looking off into the distance, where in fact, I see lots of mountains, though clouds were covering the very tops. Inside I go, and the heat from the house hit me like a blast from a newly opened oven. It really isn't that warm in here - I do what I can to save electricity and natural gas - but the difference between the inside and the outside was particularly shocking. As the snow flakes began to melt on my jacket, I noticed some minute wisps of steam rising off me! Next thing you know, I'm singing - in full voice - "psssssst Steam Heat...I got (ba-dump-dump)ssssssssteam heat..." 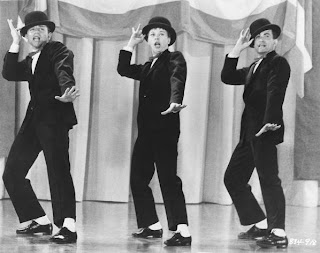 OK, I have been spending waaaayyy too much time alone lately! Thanks for listening!
Jeff
Posted by JK at 12:01 PM