The Olympian on Broadway

I just love watching the Olympics - winter or summer.  There are so many compelling stories or overcoming adversity, people going beyond what they ever thought possible, and even stories of athletes taken down a peg or two when their arrogance gets the better of their performance.  It brings out the unabashed patriot in me, too, though I love to watch when the really best team or person wins, not just the favorite.

Being that each event has a kind of now or never feel to it, the live performance element really comes into play.  Imagine each Broadway show having just one performance to win the Tony Award!  Still, that live element is what makes both the Olympics and theatre so compelling and exciting.  Any given day, you never know exactly what you are going to get!

So, I got to thinking about the Olympics and Broadway specifically (I've thought before about how sports are portrayed in musicals) and immediately came up with "The Jet Song" from West Side Story.  In it, Action sings about how being a Jet is like being "the gold medal kid with the heavyweight crown!"  Curiosity got the best of me, and I just had to see if that line had any actual historical significance.  And I just may have. 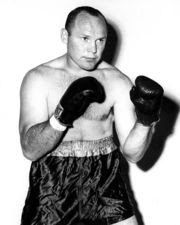 The Melbourne Summer Olympic Games were held in 1956, the year before West Side Story made its Broadway debut.  At those games, an American named Pete Rademacher (above) defeated Lev Mukhin of the Soviet Union for the gold medal in Heavyweight Boxing!  I can only imagine how well that played in 50's Hell's Kitchen... I can picture Action and the guys (maybe even a few of their dads) bonding over that victory during the Cold War.  And I can picture them re-enacting the knock out over and over.  Can't you?

(The bronze went to Daniel Bekker of South Africa and Giacomo Bizzano of Italy.) I'll remember that little Olympic fact every single time I listen to "The Jet Song," or evey time I see West Side Story.  USA!  USA!  USA!