The Change in Gay Theatre

Patrick Healy is becoming my favorite New York Times writer, but not because I always agree with him or think he's particularly "new" in his thinking or anything.  Instead, it is because he has a way with stating the obvious that makes his point compelling and relevant.  Yesterday's Theater section included an article by Healy about the upcoming season of shows that are opening that have gay characters and themes.  Being a gay male myself, I was at least interested, though if you follow this blog you also know that I, in fact, get a little tired of the "gay thing" in every play or musical.  I prefer my shows to be about the human experience, be it gay or straight, with less agenda and more compassion being shoved down my throat. 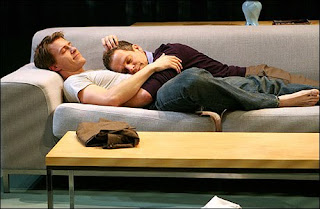 I've lived through the era - just as I was reaching my own sexual peak - of AIDS being "the gay plague," or "God's punishment for queers," and all that rot.  And while I applaud (and attended) a lot of "gay theatre" where AIDS and political activism brought about by AIDS - Angels in America, Love! Valour! Compassion!, As Is - I have to say that after awhile all the banging of drums and rallying cries became just so much white noise to the public and even the gay community.  Understand that I continue to champion the cause for being sexually responsible and am appalled by the blase attitude toward safe sex in this Manhunt/Facebook world we live in.  But as a community, I think we have bigger fish to fry, namely plain,  old-fashioned equality.  The politics of being gay is, finally, shifting from "look at us we are different and deserve a piece of the pie, too" to "we are just like everyone else and we deserve a piece of the pie, too."

I have very accepting straight friends who would and have fought with me over discriminatory behavior in the workplace, marriage rights, health benefits and rights, etc.  We have bonded over these very issues.  Why?  Because in pointing out the inequities, both sides have come to appreciate where the other is coming from, and we all fight together for common ground.  But even they question things like "why when there are gay pride events, do we only ever see drag queens and men all dressed like Judy Garland in The Wizard of Oz.?"  Frankly, it is hard to explain.  I, personally, believe that you should feel free to "fly your freak flag" - if wearing women's clothes helps you identify who you are, go for it.  But a gold spandex jumpsuit and gigantic rainbow afro wig and gaudy makeup isn't about exressing yourself so much as it is performing as a member of the opposite gender.  And being one of fify guys in pig tail braids, a blue ginham jumper and red sequined slip ons has zero to do with self-expression and all to do with being seen.  No more, no less.  And in that my straight friends and I completely agree.
So, what does all of this have to do with theatre - this is a theater blog, after all.  Well, let me first provide an example of "gay theater" that addressed my above point exactly.  Plays like Torch Song Trilogy and La Cage aux Folles both have drag queens as subjects, but neither show is about being a drag queen.  It is about living life with a different bent, about love and acceptance of self and others, and being a part of a family.  Universal themes to say the least, no?  By virtue of the subject matter they are also political in nature; most plays really have a political undertone.  But what made them successful is the universality through a unique filter.  They opened eyes and minds to realizations that different is just that, not completely foreign.

Healy's article talks about the swing toward and then away from AIDS/political statement gay plays to what we are experiencing today: gays struggling for marriage rights/family rights (La Cage aux Folles), the right to fight for their country openly (Yank! ), gays struggling with religion (Next Fall), gays struggling with adoption (The Kid), gays struggling with notoriety (The Little Dog Laughed, Take Me Out).  (I have tickets to three of these shows already, and will report on them here as I see them.)
All of these plays and musicals, past, present and future have gay characters as their subjects, but all of these topics could just as easily be written without gay characters, as straight people struggle with the same issues.  By including gay characters though, the gay community is still out there making a point.  But the politics focus everyone - gay and straight - in the right direction: we are all human.  Perhaps that is the strongest political stance to take - people are people.

And, shock of shocks, it can be done without a Dorothy costume.


Comments?  Leave on here or email me at jkstheatrescene@yahoo.com.
Jeff
Posted by JK at 12:02 PM