The much in the news lately American Idiot has provided me and a lot of other bloggers plenty of material.  If you follow my blog regularly, you know that I like to discuss the advertising of shows, both in terms of commercials and logos.  Recently, I blogged about the AI performance on the Grammys and the new commercial that started running that very night.  Today, I thought I might discuss the logo currently in use by the Broadway production, and forecast what I believe will likely be the evolution of it (if it runs successfully - which I sincerely hope will be the case) by looking back at the evolution of the logo for a similar show.

That show, of course, is Spring Awakening, which is already being described as American Idiot's precursor, and the comparisons between the two are both evident (director, star) and esoteric (themes, style, target audience).  It could be that for some time - maybe always depending on how history plays out - that the two shows will be linked in discussion and criticism.

But first, let's look at the logo as it is today, prior to Broadway previews and opening.

This logo is a wise choice for the beginning of  the campaign for several reasons.  First and foremost, it is a nod - and virtual re-creation - of the Green Day album cover of the same title (below).  This is a smart move because it will draw in true Green Day fans, who might fear that a Broadway version of their beloved group's most famous album might some how be radically altered from what they are used to.  (Of course, they are already reacting to the music video of the Green Day/Cast recording of "21 Guns.").  By using the same print style and recognizeable icon, the production is surely being inclusive of fans for whom this will be their first experience with a stage musical.

But the differences are also important to note.  Notice that the coloring is the same, if reversed.  Red, black and white seem to be the colors of choice when trying to convey a modern, harder edge and sense of rebellion (the adult version might be the logo work for Chicago). Notice, too, that the emphasis in the show logo is more on the title, rather than the group.  This balances the need to emphasize the band to a certain segment of the target audience with emphasizing that this is a title of a new work of theatre, not simply a concert version of the album.  Also, note that the usual "a new musical" or some permutation of that tag is not to be found.  This connotes, I think, two things: one, that while this is a Broadway show, fans needn't worry - Green Day's vision will be honored; and two, for musical fans: get ready for something newer than new.
The rest of the logo also calls to mind the times and ideas of the show it is advertising - I mean, really, this is its job, right?  Notice the show logo lettering - lower case "American" as if to rebel against the country, making it somewhat diminuitive and all upper case and much larger "idiot" as if to say the situation is one of idiocy, and we find ourselves thought of as American idiots.  The additon of military/flag stars, along with the hand grenade in the fist also signal that the show will have something to do with war, battle, etc., while the hand grenade itself is heart-shaped perhaps connoting an element of love, even peace, that is being squeezed desperately to the point of bleeding.  Then, too, the fist is holding up the grenade in a pose that suggests defiance, anger and even desperation.  I have not seen the show, nor am I more than slightly familiar with the songs, but from what I have read about the show, it does contain these themes and plot elements.
The final element of the show logo that bears discussion, and will lead me to my other point, is that there is the familiar rubbing out or incomplete edging of the lettering, which has become synonomous with youthful rebellion and style.  Have you seen young adults wearing Hollister, Abercrombie and Fitch, etc.?  That worn look is the style.  I think, though, that at least theatrically this style can be traced back all the way to the movie and now Broadway logo of West Side Story, one of the original rebellious youth shows, and all the way up to the RENT logo. 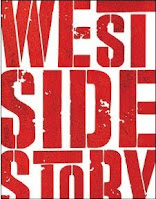 But the last show that really captured the imagination of teens and young adults was Spring Awakening, a show to which American Idiot might very well owe its existence.  That audience has grown up some in the intervening years, and is now beyond itself (which the former show examined) and more a part of today's society, facing a fast-paced, war-torn world where they must balance the needs of sociey with a need for having their voices heard (which, I presume, is elemental to the latter show).
And so the commercial machine behind American Idiot is, and will be smart in the future to, referencing Spring Awakening in its advertising.  They have so far.  And I predict that in the future, as the ads evolve, that evolution will be very much like the older show, especially given the similarities in direction, design and casting.  (I could write an entirely separate blog about the original, off-Broadway logo for Spring Awakening, but I will leave that for another time.)
First, notice the similarities between the original Broadway logos for each show:

Then, SA added an icon - what we now recognize as a cropped photo of Melchior and Wendla, but to the public at large, a young couple on the verge of sexual exploration, a key element of the plot and theme of the show.  The young couple icon is analogous to the fist/heart-shaped hand grenade icon.

Then, as the show itself became an entity of its own, advertisers for SA played up the youthful abandon and rebellion of the show with a new poster that featured the logo above a collage of photos of the cast in various moments of the play, but when looked upon as a whole, resembles "Totally Fucked," the very clear moment of rebellion and, interstingly, the very clear moment of youthful joy. (Note:  this image is not the exact poster, which also included billing at the bottom and a critical quote at the top, but I think you'll get the idea.) 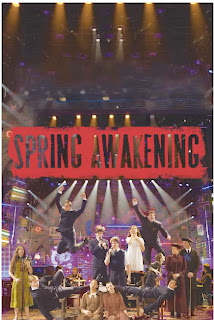 As the show evolved, and won numerous awards, the advertising went back to being more iconic with two chief black and white images - one of rebellion (Moritz rocking out in his 19th century garb and 21st century microphone) and one of youthful romance and sexuality (Wendla and Melchior in a passionate embrace).  No longer is there a faceless sexual icon, but a concrete young couple; no longer was this a "new musical" but it was a rock and roll show with a message.  Notice, too, the streamlinging of the logo - one color and transparent behind it. 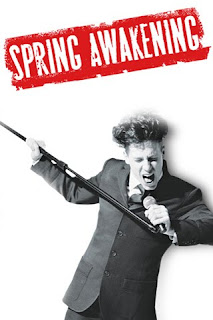 The quote on the poster above, "Broadway may never be the same," from the New York Times was apt for that poster and show, and signals, I think, the very reason American Idiot can even exist as a stage musical.
I hope this new show takes Broadway by storm.  Heaven knows theses days it could use a jolt of energy and great box office.  And should that be the case, I have a feeling the show will start advertising visuals of the production, of John Gallagher, Jr., and as it grows up, more iconic imagery.  Something tells me that there will be a version of the window card that will have a quote that compares it to Spring Awakening, and if it is even more fortunate, a quote about how it, too, will have changed musical theatre in some way.
Comments?  Leave one here or email me at jkstheatrescene@yahoo.com.
Jeff
Posted by JK at 12:01 PM