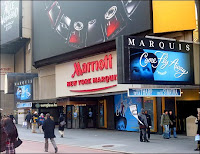 Suave.  Cool.  Sophisticated.  Debonaire.  Sultry.  Passionate.  After a quick critical review of the career of Frank Sinatra, those six adjectives appear and reappear.  And it doesn't matter what aspect of his career you look at - actor, singer, dancer.  Those words come up time and again when people describe Ol' Blue Eyes.  With a varied career, both in content and controversy, Sinatra was one of the first true American superstars.  Nearly 60 years of music, movies and concerts allowed him to amass quite a song catalogue.
That song catalogue has been fashioned into a new musical called Come Fly Away by Twyla Tharp, who will use the songs he made famous to tell the story of several patrons of a nightclub who have an evening of passion and cool, sophisticated fun.  Starring several of her Movin' Out dancers, including John Selya, Keith Roberts, Cody Green and Ashley Tuttle, the show is ripe with promise.
And as they say, first impressions are lasting ones.  That is never more true than with a Broadway logo/advertising campaign.  So, how does Come Fly Away fare in that department?  Let's take a look at what they have come up with. 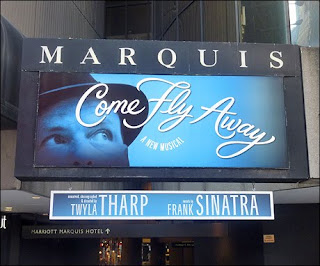 First, and most obvious in all versions of the logo is the color, a bright blue, at once synonymous with Sinatra's eyes and evocative of a bygone era.  That vibrant, but not flashy hue suggests to me, for some reason, the 40's and 50's, which in turn evokes a certain suavity and sophistication.
The second element in all versions is the lettering, a flow-y, carefree, floating cursive that reminds me of the style of such titles in the movies of the era that Mr. Sinatra really flourished in.  Then, too, is the more modern capital lettering of  "A New Musical" and the credits of Tharp and Sinatra.  All business and all modern - not in the 21st century modern, but in the "modern" of the 40's, 50's and 60's.  Clean lines and coolness is what I think of.
Then there is the final element that appears in all versions - a cropping of Frank Sinatra that shows him in a hat from the prime time in his career, jauntily pointing up.  There is a glint in his eyes as he looks up and away, which is completely in keeping with the title, of course. 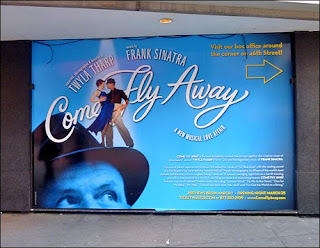 The one element that does not appear in all versions of this logo is the one element that directly ties Sinatra with this specific show - two dancers is a sophisticated and subversively sexy pose, he (John Selya) sporting a similar hat, and she (Holley Farmer) a sparkling blue gown.  They are out for a night of fun, passion, and romance.  And what better connotation for a show that will be nearly all dancing told through the song stylings of one Frank Sinatra!
You know, it took me awhile to warm up to this one.  My initial reaction was, "hmmm... Are they trying to be bland?"  But then I really looked at it.  And while it isn't my favorite, it is a good start.  I don't see this version lasting long, once more of the dance photography is introduced.  I think the common elements will remain, rearranged around exciting production shots, not unlike the evolution of the Movin' Out advertising.
The bottom line is this:  Tharp + Sinatra + an evocative logo = enough interest for me to want to see it.  But I know that once I see some more shots of Twyla's choreograhy, I'll really be drawn in!
(Marquee photos from Playbill Online)
Comments?  Leave one here or write to me at jkstheatrescene@yahoo.com.
Jeff
Posted by JK at 12:01 PM