Just when I was really settling into the obvious observation about the forthcoming Broadway revival of La Cage aux Folles: Why!?  There was just a revival of it and it FLOPPED, big time - 2005 Best Revival Tony or not. 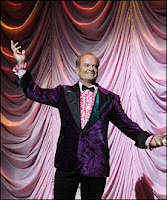 And the addition of Kelsey Grammer as Georges (above, left) didn't really impress me, and I am still praying that he doesn't just do more "Frasier" here.  His name on the marquee of a Broadway theatre has yet to equal even a smidge of success.  I guess we will see.  And as great and awarded as the performance of Douglas Hodge (above, right) was in the London version, he isn't coming with the kind of buzz most London-to-we-gottta-have-him-on-Broadway-he's-so-good transfers have.  I mean everyone had heard of Michael Crawford's greatness in Phantom long before it got here.  Ditto Les Miz's Colm Wilkinson.  No, Hodge's arrival is more on par with Louise Pitre's in Mamma Mia!  Let's hope that he, like she, turns out to be a welcome addition to the Broadway family. 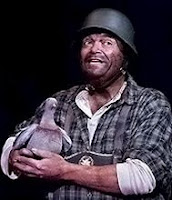 No, until today (I'm writing this on February 3), my chief interest in seeing this revival - aside from the need to see every new musical each year - was seeing how they strip down and "seedy up" a sweet Jerry Herman musical.  I mean what's next?  Dolly Levi chugging sliders at TGIFriday's?  But I digress.  Today, they announced most of the supporting cast, and when someone the caliber of Chris Hoch (FABULOUS as  inderstudy Lord Farquaard in Shrek) and Bill Nolte (wunderbar in The Producers, 1776 and Joseph...) (both above) are signing on as glorified walk-on actors, there must be something special about this show!

It doesn't really get much more exciting than the exquisite Christine Andreas (glorious in the national tour of Light in the Piazza, and heart-breakingly great in The Scarlet Pimpernel, above, left) as Jacqueline and the always terrific Veanne Cox, (above, bottom center) who I have loved ever since I saw her in Smile, as Mme. Dindon.  Then there's Elena Shaddow (who will be fresh off the title role of Fanny at Encores! and who co-starred in the Piazza tour with Andreas, above, right) as Anne.  And a newcomer always adds great fun to the mix, as in the case of A.J. Shively, (below, left) who will star as Jean-Michel.  Broadway debuts are such fun to watch - I always hope to see a new star born.  But the supporting character I can't wait to revisit is the hilarious Jacob, this time in the terrific hands of Robin De Jesus,  (below, right) who was (well, is since he's still in the show) wonderful as Sonny in In the Heights.  I have a feeling he will be terrific!  The rest of the supporting cast includes Heather Lindell (Hairspray) and David Nathan Perlow (White Noise).  (bottom, below - Perlow is in center of High School Musical picture) 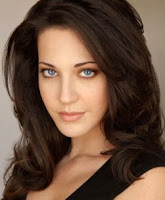 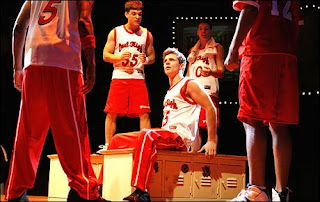 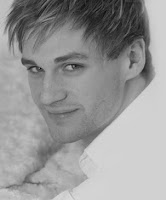 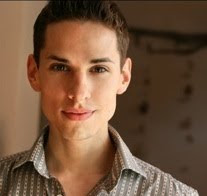 
The production will begin previews on April 6 and open April 18 at Broadway's Longacre Theatre. And now I am more than just a little interested in this show!